Things I love more than most people would consider normal:

Things I dislike more than most people would consider normal:

And few things fascinate me more than swimming around in our data and seeing how different we all are. Yeah, I know, I know. We’re more alike than we are different, my friends. Kumbaya.

My friend Steve, who I haven’t met in person but reads this email, once told me he doesn’t like Tom Cruise OR Tom Hanks movies. I almost blacklisted him over it.

The greatest travesty? 21% of people prefer when restaurants leave the tails on shrimp in a saucy dish, which means they like getting their hands all messy in a plate of alfredo sauce or scampi for no good reason whatsoever. Weirdos.

I, for one, am glad everyone is so different. Everywhere we go, we’re told to see the world binarily. It’s pro-gun or anti-gun, Fox or CNN, blue cheese or ranch. In the end, it’s just easier for political groups to fight one battle than several, for cable news outlets to compete for two audiences instead of ten, for all of us to paint only in black and white.

But don’t fall into that trap. It’s not the way we’re supposed to be. We aren’t naturally binary. Everyone is unique. Everyone is weird.

I’m sure you do or think some weird shit that you hold tightly to yourself. Things only your closest friends, if anyone, know. Things they don’t have a club or Facebook group for.

And, if you say you don’t have any weird peccadillos, then that’s the weirdest thing of all.

The Fed is celebrating a drop in credit card debt in September…because they mustn’t have looked at the October numbers yet. I saw this article on Bloomberg this week touting an unexpected decline in U.S. consumer debt in September, so I looked to see if our data told the same story. It did. The only problem is that our story is more current. The October numbers tell a far less jolly tale. See below. Maybe all of that tax refund cash is beginning to dry up.

When it comes to pharmacy retail, brand barely matters. I’m sure this will piss off a bunch of marketers at places like CVS or Walgreens, but a huge chunk of work they do is pretty irrelevant. When we asked people how they choose where to buy their prescription drugs, the #1 reason was tied to their insurance coverage, then location, then price. Only 12% of people said their decision was guided by “store preference.” I have to agree. There’s a Rite Aid across the street from my house and a CVS across the street from my office. Once I’m inside, I can’t tell the difference. Less than half of those “store preference” people use a big chain pharmacy anyway. Maybe one of the chains will figure out how to separate their brand from the pack.

I’m not sure smart displays will be the savior of the virtual home assistant category and I didn’t even know what a smart display was until today. Both Amazon and Google have gone to market with a so-called “smart display” device, which is basically an Echo or Google Home smart speaker with a touch-screen. Looking at this new category through our tech adoption model, it doesn’t look like a home run. Only 6% of U.S. adults say they are interested in buying one, which is a bad sign. Maybe they’ll get a boost over Christmas if the price is right, but it seems like a stretch to me. How is it different than having a voice assistant on a tablet?

An absurd number of people aren’t planning to get a flu shot this year. Last year, fewer than half of U.S. adults got the flu vaccine – and over 80,000 Americans died from the flu. Still, 36% of Americans told us they have no intention of getting a vaccination this year and I bet close to half of the 18% who say “I plan to” won’t. Mostly, it’s people who think they’re so healthy they don’t need it. But everyone is healthy until they aren’t. Just get a flu shot, if not for yourself, then to protect the people around you. Seriously. 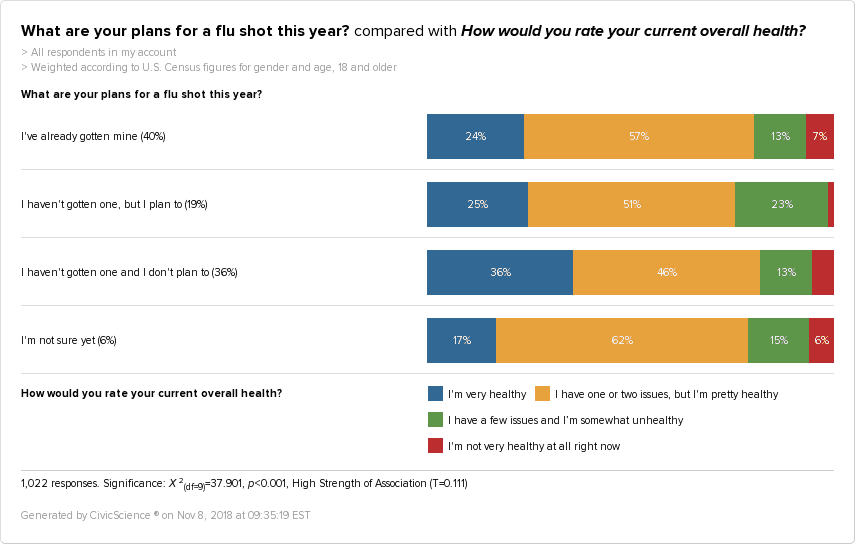 America reached peak happiness in September, for a minute. In an example of what we around our office fondly refer to as Geek Porn, I’ve found myself engulfed in the data below – tracking over 500,000 Americans’ overall happiness on a weekly basis going back to the beginning of 2013. You can expect way, way more from me on this as I dig in, but the first interesting observation is that we matched a high watermark in September, when 60% of Americans identified as “Happy.” It’s the first we saw a number like that since January ’13. It was short-lived, however. Election season will do that to you.

Our Most Popular Questions from the Last Couple Weeks