It was a pretty good week for The Middle.

Sure, one fringe of the spectrum is happier than the other, if only because the useless forecasts told them to fear much worse. Balance in politics is seldom perfect. In this case, both sides can find reason to celebrate – or lament – if they look hard enough.

That’s how any good negotiation ends. If one party (small “p”) gets everything they want, the other party leaves angry and hurt, often vengeful. Resolution typically pinches everyone a little.

Maybe, just maybe, the events of the past week will cool the temperature in our country, at least for a minute. Our early data indicate as much. No doubt, a grinding pace is on the legislative horizon. Messrs. Madison, Jefferson, Adams, and Associates would consider that a feature, not a bug. The Middle, by design, should ultimately prevail.

There’s a lot marketers and CEOs can learn from the midterms.

First and foremost, Gen Z made its presence known in a big way. I’ve told you repeatedly they’re going to save the world and now they’re strapping on their capes. If you aren’t laser-focused on understanding what makes today’s teens and young adults tick, let me know so I can short your stock.

Second, singularly obsessing about your core constituency – your current and most ardent customer – will cap your growth, at best, and leave you vulnerable to competition and attrition, at worst. Too many companies navel-gaze, engineering their products and marketing for the customers they already have, while ignoring the needs and desires of the achievable customers they can add. Familiarize yourself with the Rogers Adoption Curve. Always have one eye on the next customers along the continuum.

Third, no matter your words – or even your principles – you will often (inevitably?) be judged by the company you keep. A lot of candidates were dragged down by tribal association. Call it cancel culture or call it accountability, it doesn’t make it any less real. On that note, only you can decide whether you should advertise on Twitter.

Finally, for the love of God, can we finally stop polling people before elections for spectacle and start polling the hell out of them afterwards, when what they believe and what they care about can actually be a force for good governing, not just fodder for news segments and pundit vanity projects? Can somebody do that please?

Consumer confidence nudged upward even before the CPI report on Thursday. Not to jinx it, but things could be looking up. Our latest Economic Sentiment Index had its second consecutive positive reading this week. That period includes the days AFTER the latest plus-size GDP and jobs reports but BEFORE the election and CPI report this week. As people continue to spend down all that pent-up COVID-era savings, wouldn’t it make sense to see inflation come down fairly quickly? I’m not an economist, admittedly, just an optimist. All I know is consumers are feeling better than they have in two months, with even more good news landing in recent days. Fingers crossed.

Brand safety and ideology aside, Twitter will be a better place for some companies to advertise than others. One of our more popular tracking products looks at the audience composition of media platforms, indexed by their brand favorability and behaviors. As you might suspect, the evolving makeup of Twitter users (and intenders) is changing by the day, given that 21% of Americans are more likely to use the platform and 34% are less likely, now that Elon Musk is running the show. Naturally, these new users have different profiles and values from the departing ones, which plays out in their brand preferences. Below is a small cross-section of the dozens of retailers we track, for example. If you want to see where your brand ranks, I know a guy.

Americans’ stress levels rose dramatically in the days leading up to the election. It’s impossible to prove how much this impacted turnout or voter choice on Tuesday, but U.S. adults were definitely anxious as voting day approached. Democrats, in particular, were reporting skyrocketing levels of stress (incidentally, Ds typically identify as stressed at a higher rate than Rs). Was it simply fear that the Dem Party was going to get waxed at the polls or was it something more dire, like fears of controversy and political violence? I don’t know. Suffice to say, we’ve already seen those numbers drop in the days since. 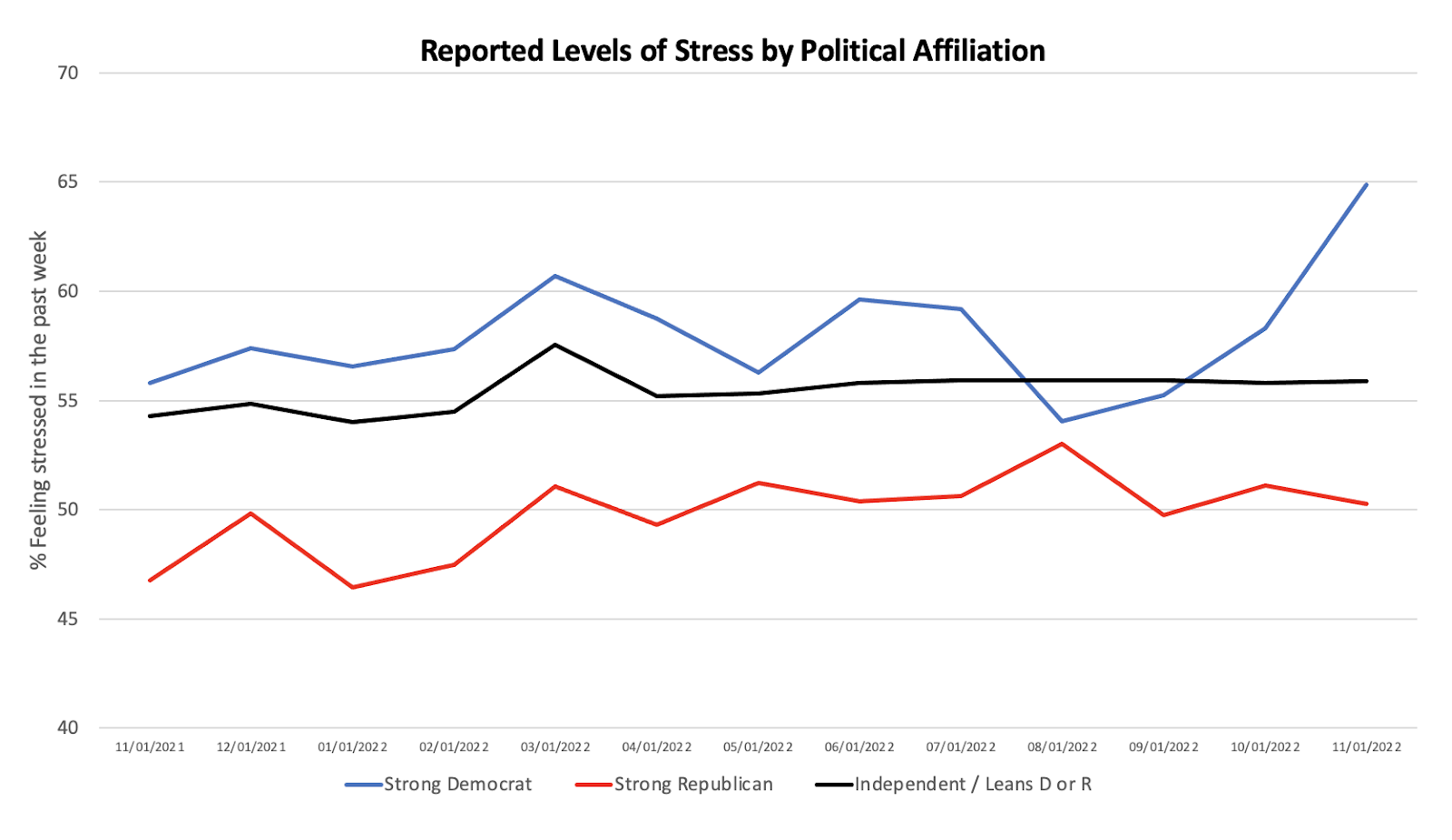 People are noticing fewer and fewer relevant ads on Facebook, not to kick anyone while they’re down or anything. Facebook users who say the ads they see on the platform are relevant to them has declined by three percentage points over the last six months (true also of most digital ads, thanks – and I do mean thanks — Apple). The news isn’t as bad for Instagram, where relevancy (and higher overall satisfaction with ads) has remained steady. I guess that’s still good for Meta, from a meta perspective.

Inflationary headwinds are likely to hit small businesses the hardest this holiday retail season. Sigh. Even as our tracking data showed a modest uptick in overall spending intent this week (just 1% shy of the same period last year), where people plan to shop has shifted significantly. General big-box retailers like Target and Walmart appear to be the biggest beneficiaries, while small businesses look to be the victims. Indeed, intent to shop on Small Business Saturday has fallen two percentage points from this time last year. Let’s change this.

More amazing insights from the CivicScientists:

Answer Key: I like Country Taylor best; No comment; Spicy AF; One that doesn’t exist yet; Savory all day.

P.S. Congrats to the entire CivicScience team for winning this year’s Pittsburgh Tech 50 Award in our category. Taking undue credit for all of your tireless and passionate work has been my greatest privilege.