A Look at the US’s Role in Syria

It probably gets lost among all the snarky-toned blog posts and predictions about box office bombs like John Carter but we do actually study some serious topics around here. Last week, we launched a question into our survey engine about the ongoing conflict in Syria and how Americans felt about our role there. With 6,987 respondents participating between June 14 and June 18 we have large enough numbers to do some interesting cross-tabulations. Here, first, are the overall results, reweighted modestly to represent the US adult population:

From these numbers, we see that only 21% of Americans believe the US should increase its role in the conflict, while 44% believe we should reduce our current involvement (32% of those feel our role should be “Much Smaller.”) And, finally, 34% seem to believe that our level of involvement is appropriate as-is.

Then our algorithms crawled around and looked for useful insights into the leanings of various groups. Let’s first look at Party Affiliation: 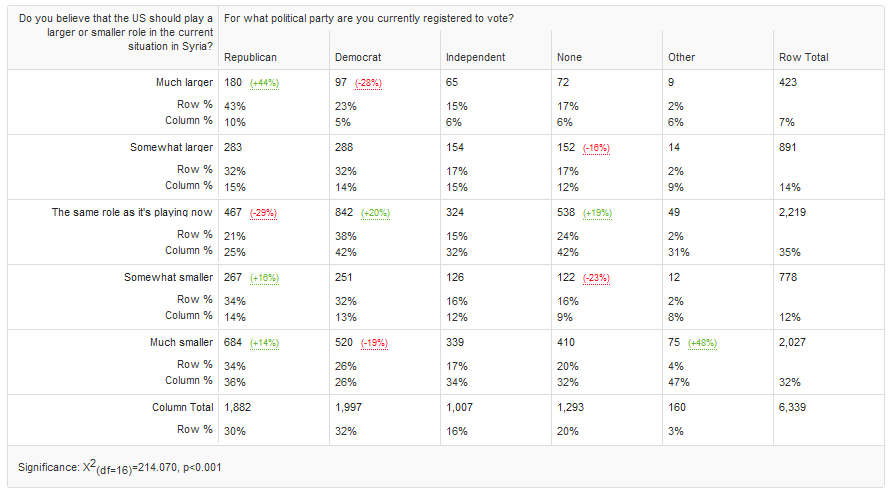 Interestingly, Republicans are more likely than Democrats both to support a larger role AND a smaller role. This might suggest a general sense of opposition to the Obama Administration, as Democrats were clearly more likely to support the current strategy. While Republicans are aligned in their disagreement with the current plan, they don’t seem to be in lock-step on an alternative strategy.

We see similar dynamics when we segment respondents based on who they support for President: 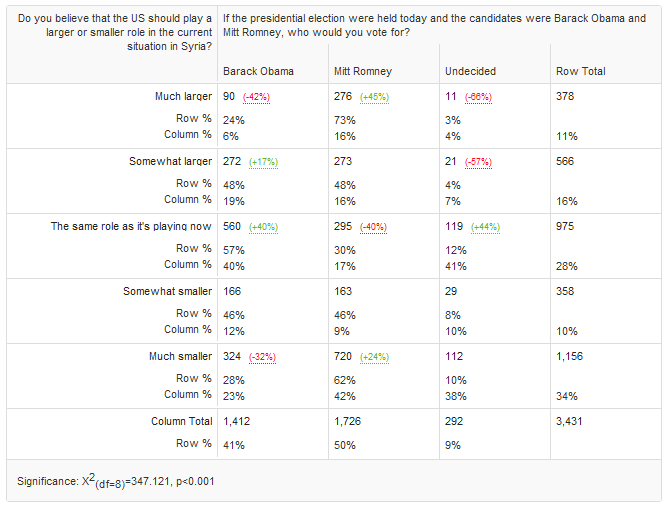 Here we see a similar sentiment from Romney supporters, namely, a position that breaks from the current strategy but that is relatively split on increasing or decreasing US involvement. What stands out here, however, is how Undecided voters are even more likely than Democrats to agree with the current level of involvement. Clearly, the “Undecideds” oppose even a slight increase in the US’s role.

OK. So let’s take politics out of the equation. Next, we looked at results based on education level: 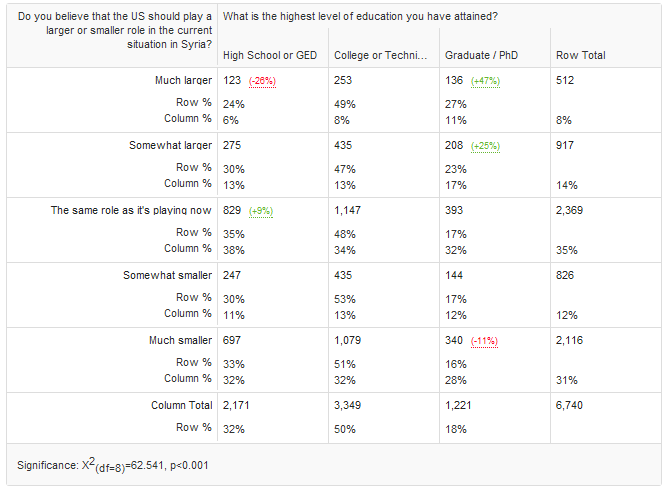 Here we see that while every group favors less involvement over more, the most educated respondents, those with Graduate of PhD-level degrees are significantly more likely to favor an increased US role in Syria. Who would have thought that all those book-smarts would make people more hawk-ish?

And finally, we looked at the only cross-tab that really matters. For the people and families who would be most affected by an increased US role in Syria, our US military and the families, here were the results: 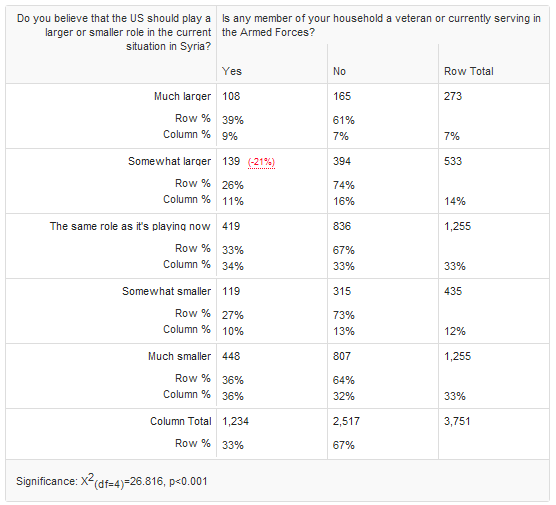 Military personnel, veterans, and their families fall fairly close in line with the full adult population but with a clear trend toward less involvement. We just felt that those voices deserved to be heard.

We have this Syria question in our tracking system so we will continue to gather responses every day. We will report back if things change.