Some dude that works with us starting geeking out about the daily Gallup tracking poll a couple weeks ago and dove into some of our data about President Obama’s approval rating. This is a new field for us so we figured it wouldn’t hurt to see how our daily numbers matched up with such a long-standing reputable study.

So, we looked at daily numbers from April 18th through May 2nd, just to get a flavor of things. We regularly collect about 1,245 responses daily to our Obama approval question (or 18,683 during the two-week timeframe below). Our scores were based on a three-day rolling average. 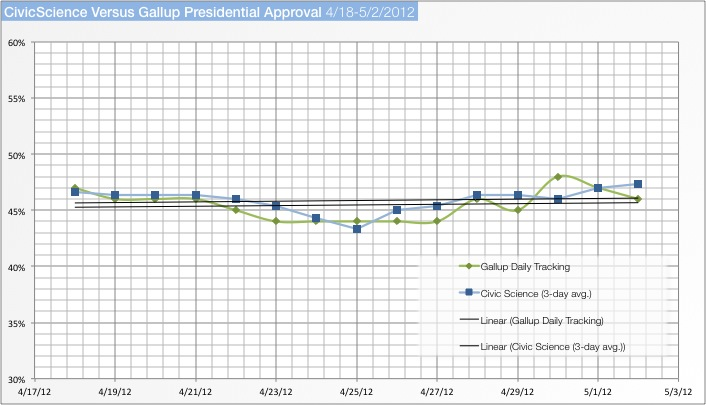 With very little re-weighting (gender and age), we were surprised to see how closely we compared given a few key differences. For example, our Obama approval question does not include a “Not Sure” option, which Gallup does. We force people to make a choice, which might explain why our “disapprove” numbers were slightly higher than Gallup’s. And, despite, some daily fluctuations, it’s worth noting that our linear score during the time period was exactly the same as Gallup’s — 46%.

Anyway, we’re just starting to explore these kinds of things in our data, so ideally the numbers will get more refined over time. We will keep you posted.

Special thanks to the “dude” Taylor Griffin at Hamilton Place Strategies for doing all this awesome analysis.