On Friday we talked about how undecided voters’ (“Undecideds”) opinions on ten major issues have shifted over the course of the last three months. Today we’re going to focus on what we know about Undecideds’ demographics and personal attributes. Do Undecideds from September look the same as they did in August or July?

(As a reminder, all numbers presented below were weighted by US Census figures for gender, age, race, and region from the 2008 voting population. All findings presented here are statistically significant, with an adjusted p-value less than 0.01. These numbers are derived from samples of 2,361 Undecideds in July, 3,181 in August, and 5,507 in September. The increasing sample sizes are due to an increase in our overall respondent base, NOT an increase in the proportion of voters who say they are “undecided.”)

One thing we know about this election as a whole is that the younger a voter is, the more likely they are to vote for President Obama, and vice versa. So when we analyze Undecideds’ personal characteristics and find things that amount to an age proxy, we can say with some confidence which candidate they’re more likely to support come November 6. 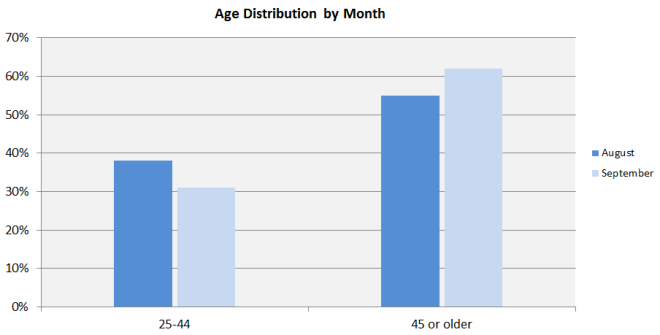 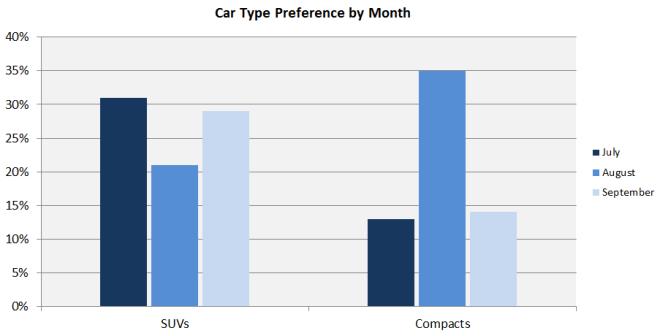 These data points match Undecideds’ profile shift toward Obama in August, and then back toward Romney in September. They also tell us that Governor Romney will have a hard time creating his own version of Scott Brown’s memorable pickup truck. It probably wouldn’t have helped Romney overcome his inconsistency issues had he tied his image to the Ford Explorer in August, then abruptly switched to the Focus in September.

So what can be learned from this? Keeping in mind that the proportion of Undecideds has remained fairly static throughout the year — our numbers have consistently put the number at 7% — we’re inclined to say that Undecideds’ recent profile shift toward that of a Romney supporter is bad news for Governor Romney, and good news for the President.

Knowing that polls showed a gradually increasing lead for Obama throughout September, it stands to reason that Undecideds who previously seemed more likely to vote for Obama have started to make up their minds, while one-time Romney supporters are now second-guessing themselves. This underscores how important it will be for Romney to win over the 41% of current Undecideds (see our previous post) who will be heavily weighing the results of the debates as they decide whom to vote for.