As we detailed earlier, this November’s Presidential election will be determined in large part by voters who say they’re not yet sure whom they will vote for. So it stands to reason that a major objective for both candidates will be ensuring that their primary talking points fully register with this vital cohort.

Over the course of the last week, we’ve asked over 60,000 people how they feel about the believability of both campaigns’ claims about their opponent’s stance on Medicare. Medicare and Medicaid respresented 23% of Federal spending in 2011, so this is no small issue.

The Romney campaign has tried to convince voters that President Obama will soon be cutting Medicare as part of his sweeping health care reforms. All the while, the Obama campaign has been claiming that, if elected President, Governor Romney will eliminate Medicare altogether and replace it with a voucher program. We specifically asked people which of these two claims they find to be more believable.

It should come as no surprise that an overwhelming majorty of Romney supporters find the claim that the President cut Medicare in order to fund Obamacare to be more believable. Obama supporters strongly disagree, to put it mildly.

When we look at undecided voters as a whole (approximately 1,800 in all), it appears that Romney’s claim is registering more strongly (with 32% of undecided voters finding it more believable) than Obama’s (26%), but, as one might expect, undecided voters are mostly likely to have no strong opinion either way (42%).

Things get more interesting when we cross these results with our question “To what broad age group do you belong?” Results seem to shift once we cross the line of Medicare eligibility at age 65. The chart below shows our results for respondents age 55-64. 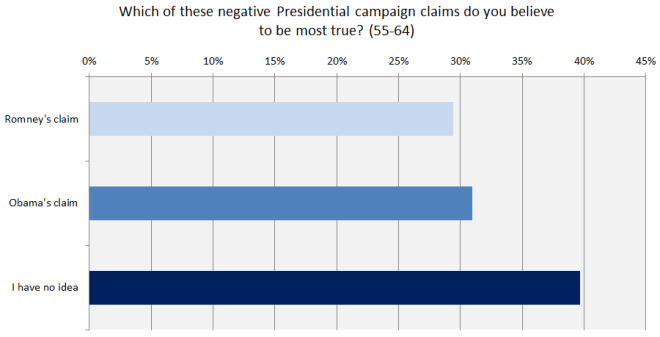 As the table shows, undecided voters aged 55-64 tend to find Obama’s claim more believable than Romney’s. Here are the results for voters aged 65 or older: 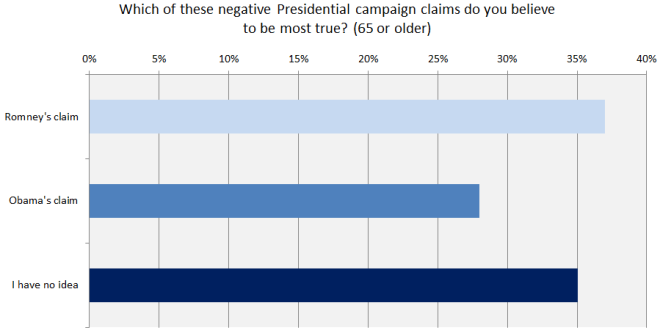 We now see that undecided voters aged 65 or older are more likely to find Romney’s claim most believable.

The difference in the proportion who find Romney’s claim most believable across both age groups is, in fact, statistically significant with this current sample (p-value = 0.034 as of this writing). If this trend remains in place, it’s hard to say how it will affect November’s election. But right now it certainly seems noteworthy that undecided voters who will be immediately affected by whatever changes are in store for Medicare seem to be more likely to side with the Romney campaign on this issue than those who will be receiving Medicare in the near future.