Tara and I were debating whether to spend $4.99/month for Apple TV so we can watch The Morning Show. Everyone raves about it.

What’s another $5, really? We’d drop that to rent a movie without thinking twice. But Tara, ever the COO, is annoyed on principle. We already have Netflix, Prime, Hulu Live, HBONow, and Disney+. How many services do we need?

She has a point.

Besides, how long until the telcos negotiate bulk rates with the various streaming platforms to offer them in bundles? Package the services together, sell them at a small discount, and send me one bill – ideally, combined with my phone and internet – and I’ll sign up right now. Even if I rarely use most of the services, the net savings and convenience are worth it.

By the way, it’s a shame – if not negligence – that newspapers and magazines can’t figure out how to ride TV’s coattails. Bundle my local newspapers, WSJ, Financial Times, and The Atlantic, and I’ll click that box too. What’s another $20/month for content I’ll actually read when we’re spending 5X that for a couple TV shows and movies we have time to watch?

Americans already proved their capacity and willingness to spend $200, even $300, on subscription television every month. And the telcos know it. Surely, they huddle at conferences, game-planning how to win back their collective “share of wallet.” They’re only partly competing with each other. They’re also competing with restaurants, travel, grocery stores, and every other category of discretionary spending.

And they’ll eventually suck $200+/month out of us for TV again. Count on it.

CivicScience just released a new tracking service studying the existing and emerging streaming platforms. The goal isn’t just to see which ones are growing (or not), but what natural combinations are forming, which ones compete head-to-head, and which ones have the highest growth potential. The demographic and psychographic differences across platforms are fascinating. It’s the Wild West.

If you count Peacock and HBO Max, which haven’t launched yet, there are 26 streaming services in our tracker. 26!

Meanwhile, you could be missing the greatest TV show ever, while all your friends and family are talking about it.

Because that’s how it starts.

Consumer confidence rebounded in a big way over the past two weeks. After a brief post-holiday depression, U.S. economic sentiment surged upward in our latest reading – reaching an apex it hasn’t seen in nearly two years. Hope abounds, as every forward-looking metric in the index is way up. The only thing people aren’t gushing about is their current personal financial situation (not uncommon right after Christmas). Nonetheless, the overall jump is significant. 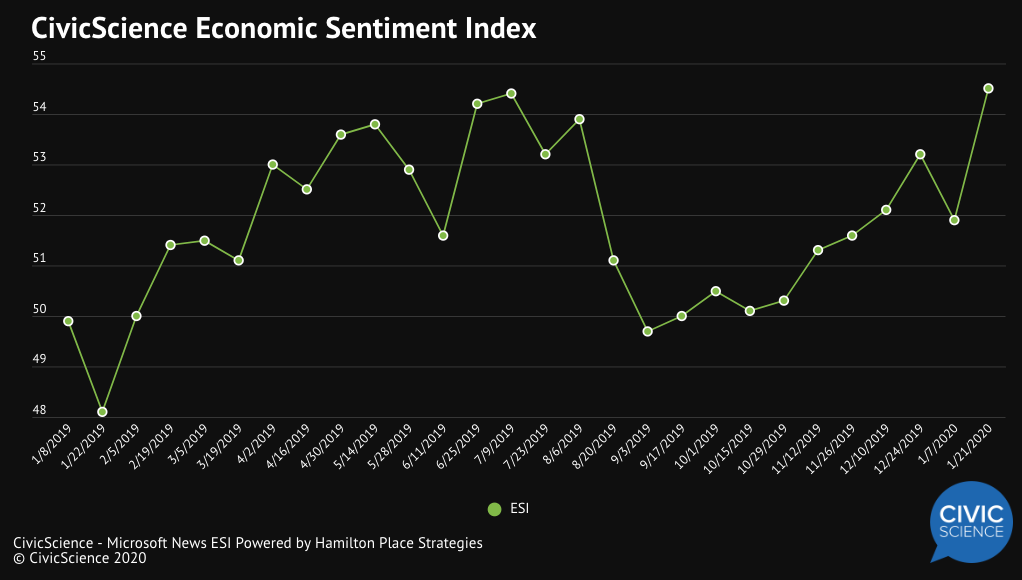 Speaking of streaming platforms, our first official rankings are basically Netflix, then everyone else. No surprise, the Reed Hastings juggernaut leads the next most popular platform (Amazon Prime) by over 20 percentage points. But they rank a dismal 17th in “intent” – meaning people who are considering signing up – while Prime ranks 2nd at that too. Naturally, with such deep market penetration, most of the people who want Netflix already have it. Still, it doesn’t bode well for future U.S. subscriber growth. Disney+ tops the list of potential growth platforms – but HBO Max could make big waves when it launches. Anyway, it’s very early in the streaming era but we’ll be watching.

Fast food joints are holding their own against the convenience store onslaught. Everyone in Pennsylvania has to decide between the Steelers and Eagles, the Penguins and Flyers, Pitt and Penn State…and Sheetz versus Wawa. We live in the key battleground state of so-called food-forward convenience stores, where you can build your own sandwich or wrap, fill up your car, and grab a pack of gum or smokes or whatever your vice. We saw a surge in consumer interest for these C-stores way back in 2014 and, by 2016, Americans believed made-to-order convenience store food was better than fast food by a 21% to 18% margin. This year, however, QSRs regained the lead, 24% to 17%. Bravo, my fast food friends. Also, Sheetz rules.

There’s a disturbing amount of discrimination in healthcare and I don’t know what else to say about it. We started with an innocuous study asking about people’s satisfaction with their doctor and uncovered a bunch of disparities in the quality of attention patients felt they received, particularly among groups like minorities and those in the LGBTQ community. Just read it for yourself. It sucks.

In far more promising news, public support for vaccinations is on the rise. You know I try not to show bias here but anyone who doesn’t believe in vaccinating their kids should just find something else to read on Saturday mornings. Bye. Fortunately, that would be a tiny number, as our data show a healthy (pun intended) increase in support for vaccines since just last year. That doesn’t suck.

A ton of people buy their jeans at Target – well, or maybe at Walmart. You’ll start seeing more work from us in the apparel space, an area we’ve only dabbled in historically. So, I’m learning as we go and I was intrigued by a study we did this week on the jeans category. It appears to be one retail niche that is relatively unaffected by the online shopping tsunami. Only 12% of Americans purchase dungarees online and if you thought I was going to write this entire blurb without capitalizing on the chance to write the word dungarees, then you don’t really know me at all. Anyway, the largest group of consumers buy their jeans at big-box retailers. Perhaps because only 19% of people are willing to ever pay more than $50 for a pair.

We also published studies this week about the potential threat TikTok poses to Instagram and Snapchat; an infographic of the most trusted skincare and beauty brands; and a dive into reusable grocery bags and other recycling trends.

Because I have to share the most popular questions of the week:

Answer Key: There’s only one way to pronounce data, No, Always, No, Never