I can’t believe I’m doing this.

I’m about to validate one of the biggest right-leaning conspiracy theories out there today.

The vast majority of media today has a liberal bias. Yep.

You know why? Because, in the current socio-economic landscape, they’d be stupid – if not fiduciarily negligent – not to. It’s not a question of ideology. And it’s not about the political orientation of most college-educated media pros. At least not primarily.

But wait, isn’t Fox News the most watched cable news network? Yes. Yes, it is.

It’s also a false flag. Take a gander at this:

Fox News captures only 30% of the national cable news market. CNN and MSNBC capture over 50%. Conservatives make up only 1 in 5 of that “other” category.

The truth of the matter is liberal content attracts larger audiences, which attract more ad dollars, which support more journalists, who produce more liberal content, and so on.

The only reason the audience/revenue disparities aren’t greater is because MSNBC, CNN, BBC, etc. divide up the spoils. The conservative audience Fox appeals to is a small minority, but when concentrated under one roof, they’re large enough to support one outlet.

Or to elect one president.

Nonetheless, if you run a private enterprise, whether a start-up or an established company merely trying to survive, would you target the smaller market, monopolized by a single competitor, or the fragmented one that’s double in size? If you’re smart enough to read this email every week, you’re smart enough to answer that question.

At a time when people are seeking out content that affirms their existing beliefs, most outlets would be misguided to be anything but liberal. Cancel culture is a bitch. And our data shows over and over again that Liberals are far more likely than Conservatives to punish brands and outlets that break from the tribe.

So, if an editor has to decide between a left-leaning tilt in an article or the prospects of losing audience, losing advertisers, and downsizing their newsroom, it’s a no-brainer. In the same way I’m biased to breathe, media outlets are biased to survive. Eyeballs and the ad dollars they attract are their oxygen.

Consumer confidence is still in limbo and that’s unusual. Our Economic Sentiment Index had its second consecutive flat reading, which hasn’t happened in as long as I can remember. In today’s hyper-sensitive media cycles, consumer confidence typically looks more like an EKG. Yet, here we are. Even as confidence in the job market hit yet another record low point, a few other metrics buoyed the overall index. America is clearly in wait-and-see mode. 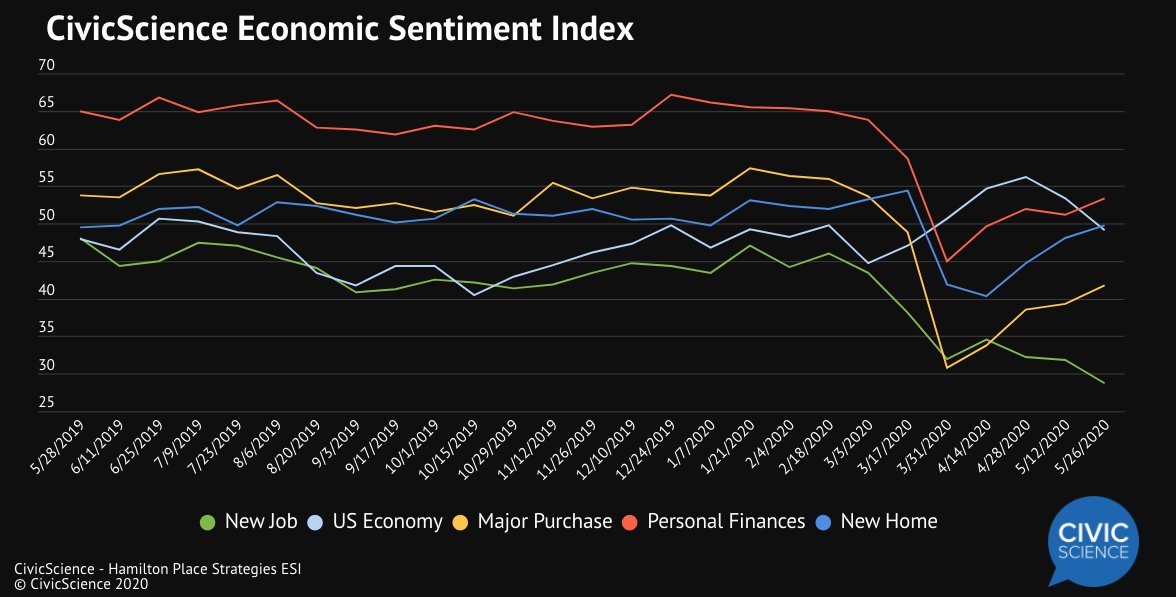 One thing that happened later than we expected was a jump in consumer price sensitivity. Since we started our economic index in 2012, one thing you could set your watch to was a near-immediate correlation between a decline in consumer confidence and a rise in cost-consciousness. So, when our ESI fell off a cliff in late March, it was uncanny to see price sensitivity actually fall. The short-term boost of federal stimulus checks and the fact that consumers couldn’t spend anything in several categories kept cost-cutting off the table. But here it comes – a summer of discount shopping. Take that to the bank.

Another force that kept price tolerance afloat through the pandemic is a deepened sense of brand loyalty. I could riff about how tribalism has created an entrenched sense of allegiance between consumers and their brands, but you have to be tired of hearing me beat that drum by now. Just know that our brand loyalty metrics hit an all-time high in April and it’s particularly true among proficient online shoppers and those most eager to return to physical stores.

In more unsatisfying news, quarantine sex ended as fast as it started, if you know what I mean. The initial trend toward increased sexual activity we saw in the early days of lockdown lacked the endurance we expected and fell into a slumber. There are a number of correlations – or excuses – that explain this premature turn of events. Maybe it’s a one-time thing. Maybe things will go up again when we wake from our coronavirus nightmare. Either way, we’re sure this never happened before.

HBO Max must be using some next-level strategy because I sure can’t figure it out. Maybe waiting until the end of a nationwide quarantine and the advent of warmer summer weather is precisely the right time to sell people on a new streaming service, anchored by binge-worthy content you need to lock yourself indoors for. That would certainly prove our data to be wrong, which has certainly happened once or twice (out of a couple billion). But we’re not seeing it. A mere 3% of Americans say they are “very likely” to subscribe to HBO Max right now. Three percent.

City-folk are looking to get the hell out of Dodge. Nearly every activity we track to predict the pace of economic recovery has a common recipe. Middle-class to affluent, white, rural, and suburban males are more likely than other groups to be comfortable returning to restaurants, sporting events, even shopping. But when we look at vacation and travel, it’s the city dwellers who are most eager. Makes sense, I suppose, if you’ve been cooped up in an apartment building or in a tightly-packed neighborhood for the past 2+ months. Lots of other awesome stuff about summer plans and retail in this study.

Given that I played hooky last week, we have a ton of other research I can’t cover in this one little email, so click on over and read it yourself:

Sorry. I know that’s a lot. We’re just that awesome.

And here are the most popular questions of the past two weeks: