I had no idea what hummus was when I was a kid.

Don’t even get me started on sushi, which was unfathomable until my early 20s. When your prevailing childhood idea of a fish restaurant was Long John Silver’s, who the hell would ever eat it raw? Gross.

Today, I could pretty much live on hummus and sushi. And to think of all the years I missed.

If only those were the most deplorable blind-spots I had from my half-redneck childhood. I wish.

I can’t remember how many times I jokingly aimed a gay slur at a soccer or football teammate. Or the times I spouted sarcastic homoerotic innuendo at a fraternity brother. Or all the other latent and blatant homophobic things I did when I was young.

Growing up in semi-rural Western Pennsylvania, homosexuality was an urban legend. Why else wouldn’t I know anyone who was gay? Everybody in my school was straight as an arrow. Weren’t they? And, since it wasn’t real, what harm could there be in mocking a fictitious “lifestyle” at my friends’ expense? Nobody got hurt. Right?

I just cringed writing that, so I can only imagine how much you cringed reading it.

Thankfully, time and experience afford us the opportunity to learn, to evolve, and to make right. I watched it happen gradually with my dad, who grappled when one of my best friends came out, then as I was a groomsman in his wedding. But my dad changed, slowly but surely.

For me, it happened earlier and more swiftly. But still.

I won’t rattle off all the things I’ve done to educate and improve myself or to atone for my bigoted sins – because it won’t make them disappear. I’ll just say that I work hard to be an LGBTQ advocate and to make sure that my company and my family do whatever we can to advance the cause as well.

And I’m super hopeful for the future. My daughters will never know anything but a priori acceptance. They yell at me when I so much as refer to someone as “old.” Kids today are enlightened. Empathetic.

I, on the other hand, was an asshole.

Consumer confidence fell over the past two weeks, even as the old school indices reported otherwise. Our Economic Sentiment Index showed its first downward turn in over a month this week, particularly hurt by falling confidence in major purchases and – most notably – the first decline in optimism for the overall U.S. economy since mid-January. That would seem to be at odds with the Consumer Conference Board announcement of rising confidence “in May.” Here’s the problem – the Conference Board shut off their survey on May 16th, reporting it on May 28th. That’s 12 days! We also reported ours on May 28th, the same day we stopped collecting data. Try to keep up, folks.

All Millennials are not created equal and you can see it in their online behaviors. Few things drive me crazier than when a client says something like “tell us about Millennials.” Do you realize generational cohorts span nearly 20 years – that’s two decades of life stages? How different are you today than you were 20 years ago? Seriously. So, we’ve started an extensive study into intra-generational subgroups among Millennials and Gen Z – with the goal of identifying differences and, ultimately, breaking all of you luminaries of your reliance on obtuse, lazy lingo. Here’s a first, simple piece, looking at the online behaviors of Millennials aged 25-29 and 30-34, respectively. Let’s just say they’re very different, if somewhat intuitively.

It’s over. Mobile banking should now just be called “banking.” This feels like big news to me but maybe I’m just a geek. This quarter, for the first time ever, the percentage of Americans who do the majority of their banking on a mobile device has surpassed the percentage who do none of their banking on a mobile device. It was driven by a huge 10-point surge of “mostly” mobile bankers over the past year – see the orange line below. I don’t need to bore you with the age correlations in this one. You’re smart enough to figure that out for yourself.

In related news, personal finance apps like Mint and Acorns have kind of stagnated – or even gone backward – since we started tracking them, except when you look only at Gen Z consumers, where 1-in-4 are using or intend to use one of the apps, which is especially impressive because most of Gen Z isn’t even old enough to have a real job yet and maybe that’s all the apps should really care about, long-term, because Gen Z is going to be bigger than any generation we’ve ever had, so anyway, you should read more about it. The end.

People who drink non-alcoholic beer are also into never-get-you-high weed. First, let me tell you what blows my mind. Non-alcoholic beer is growing in popularity – or at least shrinking in unpopularity – and it’s been particularly evident over the past few quarters. What’s not surprising, but still valuable to get your head around, is that there is a super-high (figuratively) correlation between NA beer drinkers and people who are into CBD products. They’re mostly health and fitness folks, for sure, but it’s remarkable how both are steadily on the rise. Teetotalers rejoice! 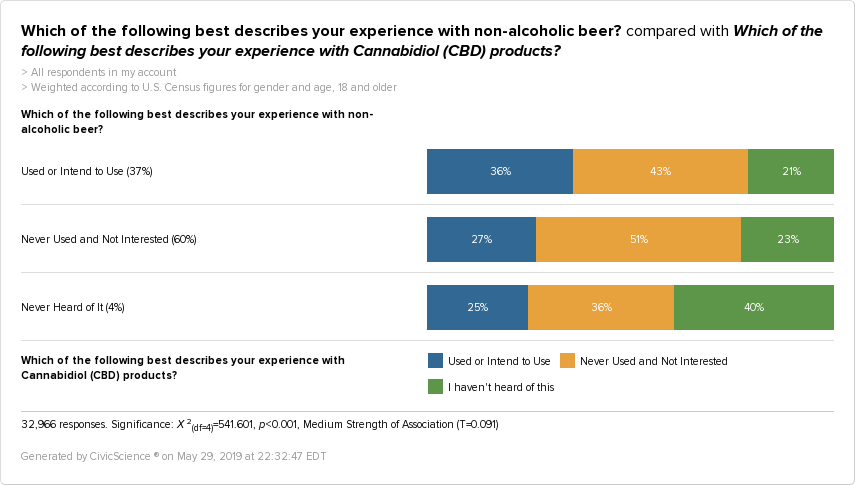 And here are the most popular questions we asked across the land this week:

And here are the correct answers = No, Yes, Yes, No, Gas.