When did being right become more important than anything?

Back in March, I mentioned a friend who bet me the death toll from COVID would never surpass H1N1. I didn’t take the bet. Because I’d lose either way.

We all knew if social distancing contained the virus, the naysayers wouldn’t credit the efforts. They’d just say the crisis was overblown from the start. There would be no way to prove them wrong.

Of course, I would have “won” that H1N1 bet by about 10X and counting. And yet, those same bettors tout every story they can find about falsified COVID deaths or how they only happen in nursing homes. They still believe they’re right.

Being right is the best endorphin rush.

And even if the preponderance of evidence, science, and media says otherwise, you can simply cast it aside as “fake” or, better yet, part of some Deep State conspiracy. Anything to ensure that you won’t be cornered as wrong. Because being wrong is the greatest sin.

The paradigm is wholly unforgiving. Admitting you’re wrong – even once – collapses your house of cards. It indicts the political tribe you adhere to, because everything is binary. Either COVID is overblown or it’s not. Either Trump is bad or Trump is good. Either Fox is wrong or CNN is wrong – always.

There’s no and. There’s only or.

I have no idea if it can be fixed. As long as people inherently distrust anyone or anything that challenges their existing beliefs, we’re screwed. Nobody is malleable right now.

We might watch the story replay itself over the coming days, when we see if the recent explosion of COVID cases results in proportional deaths and hospitalizations. I would love, love, love for that not to happen, even though I’d have to suffer through a bunch of smug assholes gloating about it on social media.

But, hey, if the worst scenario does play out – heaven forbid – at least we can enjoy the consolation prize of rubbing their noses in it.

That’s how this twisted game works.

Consumer confidence fell precipitously again for obvious reasons. I almost lost my shit last week when the press bloviated about the Consumer Conference Board’s index that said June was some kind of banner month. Please. Their survey ended on June 18th! They excluded 40% of the month – 12 whole days – when cases accelerated and states returned to lockdown. Why people still follow these ancient metrics is beyond me. Anyway, things got ugly over the past two weeks. Take my word for it. Or read for yourself. 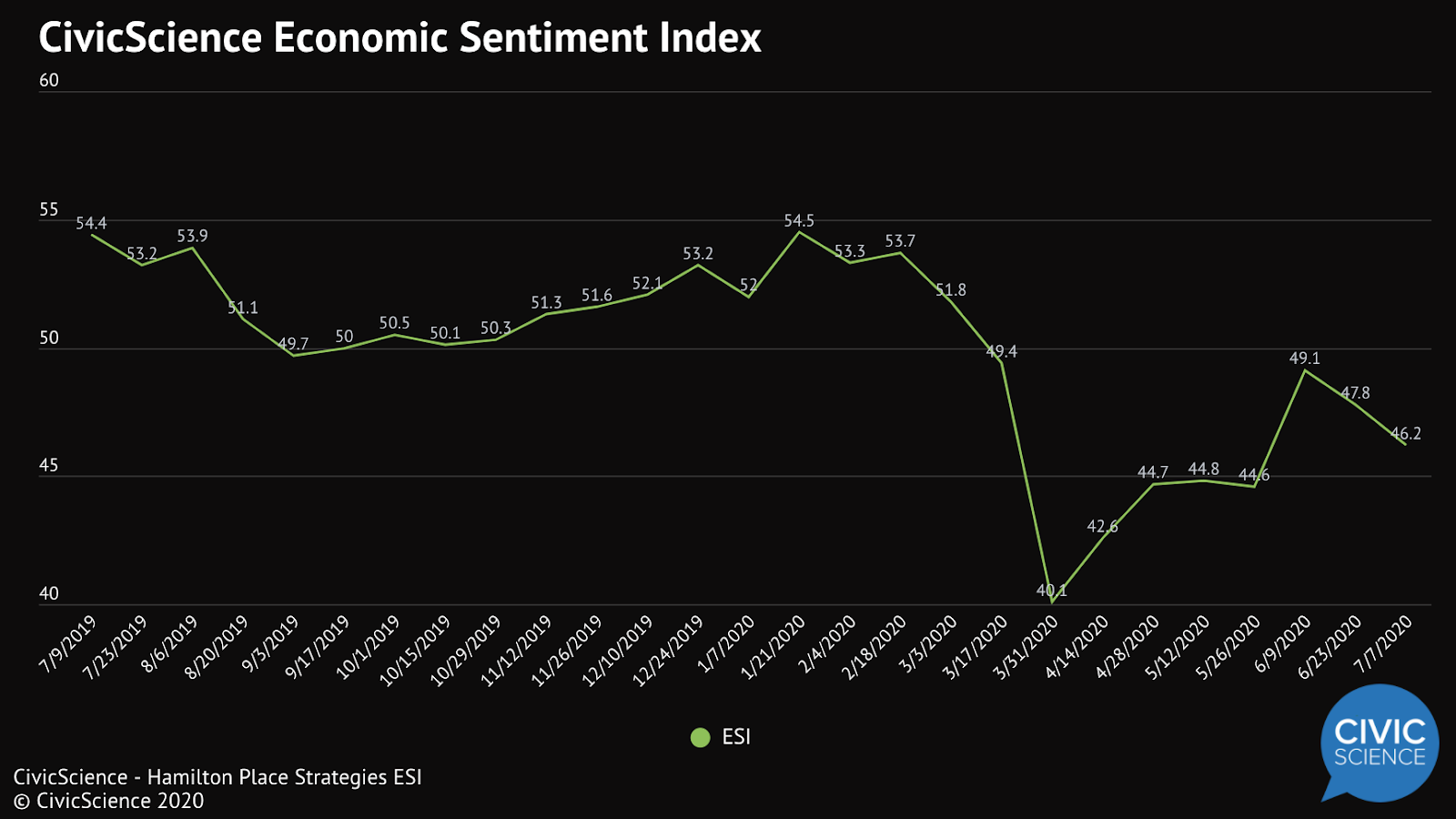 Americans are more unified about masks than anything I can remember in a long time. Despite a few amateur infectious disease experts you might know on Facebook, consensus on the efficacy of masks is remarkable. While, yes, there are political effects in the results, only 25% of Republicans are anti-mask. There are literally more people who believe in the existence of Bigfoot than people who denounce the science on masks. A tiny bit of my faith in humanity is renewed.

And that’s good for the economy, because nothing makes people more willing to return to physical stores and restaurants than mask requirements. Meanwhile, the folks who are comfortable shopping in stores right now are looking for sales and promotions. Safety and deals. That’s what people want. That and a lot more you can find in this study we did about retail this week.

Parents’ views on their kids returning to school are fascinating. More than one-third of U.S. parents say they’re completely uncomfortable sending their kids back to school in the fall. Lower-income families are particularly concerned, which is interesting. On one hand, maybe schools in lower-income areas aren’t considered to be as safe. On the other hand, you’d think schools in higher-income areas have better systems for online learning, while the families in those districts have more options to work from home or pay for alternative education. But no, the results are completely counterintuitive.

What’s not surprising is that most people have no interest in getting on a plane. Sixty-two percent of Americans say it will be at least 6 months until they board an airplane again, unless one of their super rich friends with a private jet hooks them up with a free ride to Fiji (hint, hint). OK, I made up the second part of that, but the rest is true. People are super uneasy about commercial air travel right now. For what it’s worth, Southwest might fare better than other airlines. But it’s still pretty bleak.

More people jumped into the Twitch universe during lockdown and it turns out to be a great place to advertise. We saw a 30% jump in Twitch viewers from February to May, not unlike a lot of stay-at-home media during quarantine. Most notable for the advertising folks among you is that Twitch users are far more likely than non-users to say the ads they see are relevant to them. Specific brands like Bounty are cleaning up with Twitch viewers. We’ll be diving into the Twitch phenomenon a few times in the coming weeks.

Rideshare apps are kind of screwed, but it could bode well for car sales. I’m not even going to explain this one because I know how smart you are. Just know that rideshare users are 75% more likely to buy or lease a used car in the next 90 days.

We studied a litany of other things too:

And here’s a double helping of our most popular questions over the past two weeks:

Which of these is the best rivalry in the NFL?

Do you monitor your daily usage / screen time on mobile devices?

Have you ever traveled to a ‘no-sales-tax’ state to make a major technology purchase like a new computer or laptop?

Do you keep alkaline batteries in the refrigerator and / or freezer?

Do you own a cowboy hat?

How do you feel about Elon Musk?

What‘s the coolest instrument in a rock band?

Which is your favorite among these traditional patriotic songs about America?