Of course the stock market is booming.

That’s what happens when the rich get richer.

And if you didn’t realize that’s what’s going on right now, you’re either not rich or you need a new financial advisor.

I know. Rich is relative. But if you’re doing Zoom calls all day in a home office or buying camping gear with the money you saved from canceling your European vacation, you’re not not-rich, by most measures.

Truthfully, if you’re in the target audience for this email, you likely work at a large brand, media company, or investment bank. You’re probably rich. I’ll bet your 401k is crushing it.

But, you’re in the minority, mathematically speaking. Don’t forget.

Concerns over income inequality in America have accelerated more than almost anything we’ve studied since 2016. Look at the blue line below and try not to get the bends:

Yes, things were bad coming out of the financial crisis a decade ago. But never as bad as the week of July 12, 2020 – when 53% of Americans were “very concerned.” The green line has never been lower than it is right now.

I don’t need to explain how the numbers break politically or demographically. It’s exactly what you think it is. The “not at all concerned” group will never drop below 20%. Ever.

It’s not only tragic that so many service workers and others lost their jobs because of COVID and struggle to pay their bills. It’s equally frightening that they aren’t able to participate in the economic windfall being created on Wall Street right now.

We’re not even thinking about the long-term impact of COVID yet. The education gap will worsen. Kids in financially secure families with 600 Mbps internet and well-resourced schools that dole out iPads will weather remote learning far better than those without. We’ve already shown you that families in lower-income areas feel far less safe sending their kids to school anytime soon.

I don’t mean to depress you on the Saturday morning of a long weekend. I’m sure we’re all hungover.

But as we honor America’s working class this holiday, I want you to know what they’re up against. Things are broken. Badly.

In sunnier news, consumer confidence perked up substantially over the past two weeks. Hitting a high point we haven’t seen since mid-March, our Economic Sentiment Index surged upward this time around. Our friends at Axios rightly pointed out that the underlying metrics were mixed, with confidence in the job market and personal finances remaining well below pre-COVID levels. My sense is that we are seeing the effects of hope, spurred by declining virus cases and largely uneventful (so far) returns to school. Fingers crossed it stays that way.

In case you think I just make this stuff up as I go, our data is showing that consumers are increasingly comfortable venturing out. Over half of Americans still haven’t resumed most normal activities, even as their state and local governments have allowed them to do so. Still, the numbers are improving across most of the categories we track. Forty-four percent of adults now say they feel comfortable eating in restaurants, up from 30% 60 days ago. Although one-third still say it will be 6 months or more, let’s celebrate the progress. Intent to travel by plane is up too. The only thing we saw slide was confidence in being able to access COVID tests. All in all, I’ll take it.

Americans are almost evenly split on voting methods. You’re probably aware that mail-in voting has become the newest political football at the crossroads of COVID and tribalism. A study we did this week found that the partisan divide on the issue was sadly predictable. What’s more interesting is how partisanship and age, together, make the pros and cons (depending on your political persuasion) a little more complicated. Forty-four percent of Republicans over the age of 64 would prefer to vote by mail, compared to less than 23% of Republicans under that age. Considering how much older voters broke for Trump in 2016, his efforts to discourage vote-by-mail could be riskier than I initially thought. Read more about it here – they even let me write this one.

News, even more than sports, is keeping live TV alive. I thought it would be sports. That’s why we do it – pay for Hulu Live that is. But it turns out that news, particularly local and cable news, is the #1 reason consumers continue to pay for access to linear TV. Sports isn’t even #2. The experience of watching shows while they air edges out sports. Five percent of people with live TV say they’re stuck in a contract but plan to drop it. One notable finding in this study is that while Boomers are the most likely to still pay for live TV, Gen Z is doing it more than Millennials. Perhaps a renaissance is coming. 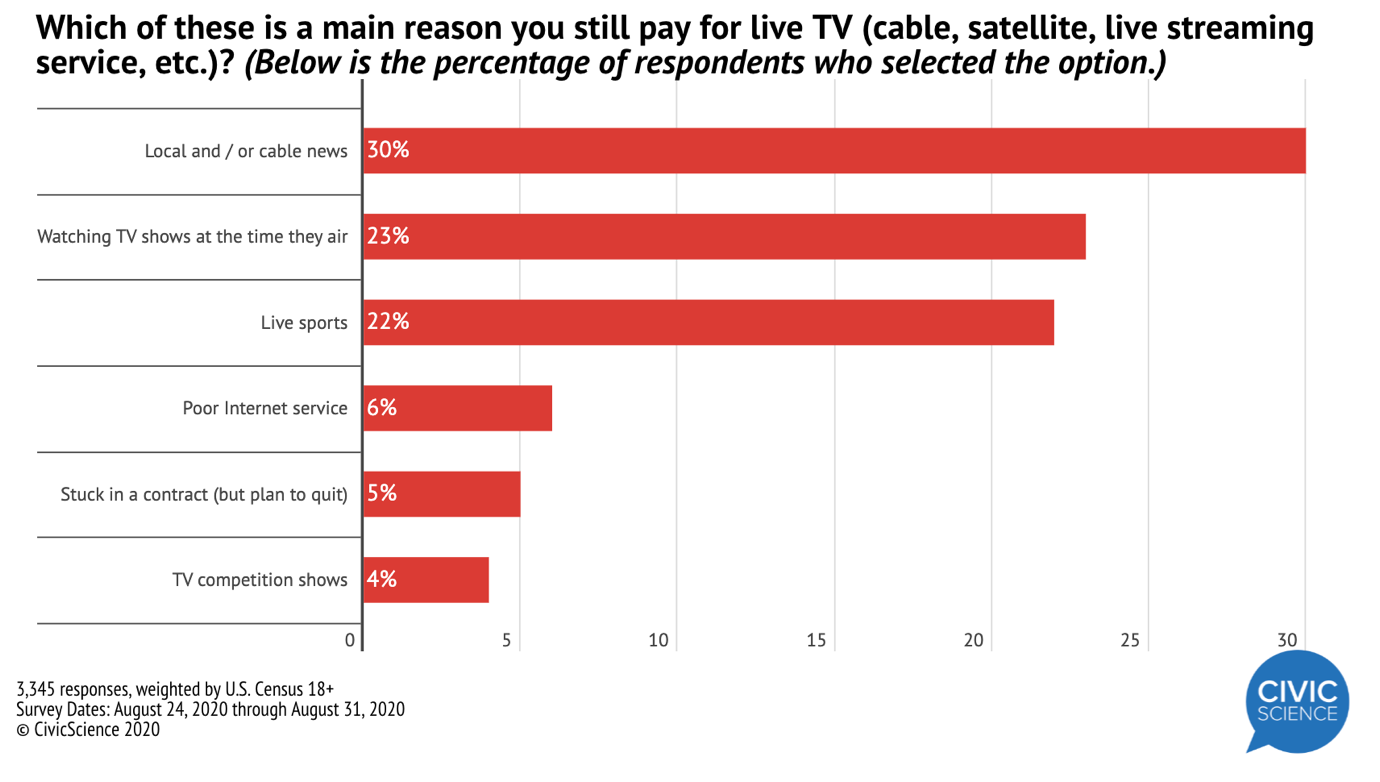 You really have to hand it to Disney+. It started with a massively successful launch, shocking analysts (but not us). Then after plateauing for a bit, Disney+ saw its subscriber base jump from 27% of U.S. adults to 36% after they unveiled Hamilton. Now it looks like the strategy of sending Mulan straight-to-streaming will be another big win. 1 in 5 people we identify as Disney+ “intenders” say they are likely to drop the $30 to see Mulan, which means they have to subscribe first. What happens in December when Mulan is free?

Our research team continues to be prolific. Here’s what else we published this week:

These were our most popular questions this week:

Answer Key: The latter; Um, no; Always; In the oven; Inglourious Basterds; I wish.