Did you know this whole email was somebody else’s idea? I told you before if you were listening. It was the brain-child of one of our clients a few years ago.

He even suggested the name, “What We’re Seeing,” and it stuck. I wanted to go with something edgier like “The Dick Picks” but we didn’t know you very well back then and we were afraid it would offend you. Little did we know your appetite for Dick jokes has no ceiling.

Anyway, here we are 130 (or so) installments later and I’m still having a blast. Last week smashed our records for readership and open-rate, so I guess it’s still working.

One of my biggest fears is that I’ll run out of things to write someday – that the end of the week will roll around and I won’t have a single funny story, profound observation, or business problem to opine about in the prologue.

Then what will I do?

I burned through my best canned stories from college, childhood, and parenting months ago, when the distribution list for this thing was 10% of what it is today. Now I have to make everything up as I go.

The problem is, I can only play that card once, so I better wait until I desperately need it.

Just when we were starting to have doubts, consumer confidence jolted upward. In fact, our vaunted Economic Sentiment Index reached its 2019 apex and damn-near climbed past its highest point in over a year. Optimism for the job market and personal finances carried the day – or the three-day rolling average, in this case – while overall confidence in the U.S. economy continued its gradual rise. Given that our lofty sentiment numbers foretold of the increased consumer spending numbers the Department of Commerce reported this week, another reading like this one could bode well for more spending in May. Let’s hope.

The fastest-growing “social” network is ————– LinkedIn?!?! And it might not even be close. People seldom talk about LinkedIn. Maybe it’s because Microsoft owns them and they don’t have to do splashy announcements and earnings calls every quarter. But if you look at our data (and the chart below), LinkedIn most certainly deserves some love. The percentage of U.S. adults who use the platform climbed from 26% in Q2 2018 to 34% this quarter. That’s a 31% overall jump in 12 months. Facebook, Twitter, Instagram, Snapchat, and Pinterest would kill for growth numbers like that. Here’s an interesting theory – what if it’s a lagging indicator of the job market? Seems plausible. Or maybe it’s just because LinkedIn is the only place for grown-ups to congregate without yelling at each other about politics… or recipes.

As Spotify and other streaming services continue to grow, they’re shaking up the music genre mix. We published data this week that looked at trends in Spotify usage over the past two years and found some interesting discoveries. Yes, unsurprisingly, the category is growing and so is Spotify, evidenced by their earnings on Monday. What really caught my eye was the changing mix of music genres listened to most among Spotify’s users, when we compared numbers from 2017 and 2019. You can see for yourself but, basically, pop music and rock/classic rock are free falling, while hip hop and R&B are booming. Country hasn’t budged.

Apex Legends, a video game, is making a dent in Fortnite, which I shouldn’t have to tell you is a video game. They’re called “battle royale” games and every kid in America but mine plays them, which kind of sucks because I’d probably dig playing it with them. Anyway, you know by now that Fortnite is a commercial monster, dominating a category expected to clear $20B in revenue this year. But along comes Apex Legends, which is small compared to Fortnite but has grabbed its piece of the pie. Our data show that 30% of these gamers have moved from Fortnite to Apex entirely and over half at least split their time between the two games. Fortnite has done a better job of attracting girls (but not my daughters) to play, though they still make up a fraction of the category. In related data, video game streaming is going to be huge.

You can’t overstate how important free shipping is to the rise of online retail. I don’t need to add much to that statement, other than the fact that it’s critically important to female shoppers in particular. Beyond that, if you want the hard stats, read for yourself.

Everybody swears. Well, almost everybody. If you couldn’t tell from this email over the years, I swear a lot. I have a particular penchant for the F-word in normal discussion, though I’ve only ever used it once or twice in this email. Yes, it’s a lazy instrument but it often communicates things I can’t otherwise articulate. Fortunately, I’m not alone. 1 in 5 people say they swear “a lot,” over half do it at least “fairly often,” and 93% of people do it at least sometimes. I could write a novel on all of the correlations we discovered, but let’s start with the fact that my age cohort (35-44) is by far the biggest swearers because of course we are. And suburb-dwellers. Also, LGBTQ people. And my favorite – people in operations and sales jobs. See for yourself. 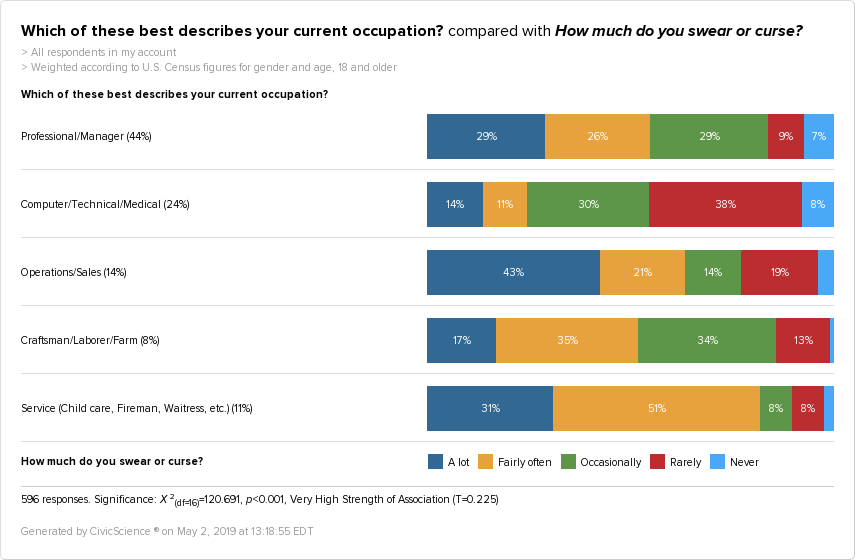 And here are the most popular questions of the week: