I hope your extended Fourth of July weekend was half as good as mine. That would be saying something.

Five days in the mountains gives you a lot of time to soak in the joys of life and – you may find this hard to believe – writing this email is one of my true joys. The thoughtful replies I received to last week’s non-email were a great reminder of that.

If you had told me two-and-a-half years ago that a thousand-word email I had to write every week would fall under the category of “blessing,” I would have blocked you on social media as a lunatic. But it’s true.

I’m not even talking about the business value it’s created – the new clients and revenue and whatnot. Those are table stakes, though my shareholders might disagree.

The friendships and other benefits are next-level.

Two weeks ago, I took Tara and our daughter to see one of the world’s biggest (and one of my favorite) bands – with all the VIP perks – because a member of the band (and now a friend) is a stats geek who reads this email. Last year, another out-of-town stats geek invited us to a jazz show, only for us to find out he’s a world-famous musician AND that Pittsburgh has a renowned jazz scene I didn’t even know about.

And those are just my music stories.

Through this email, I’ve bonded with complete strangers over parenting, losing parents, entrepreneurship, the plight of Gen X, restaurants inexplicably serving shrimp in sauce dishes with the tails still on, and everything in between. When I travel, I can always find new friends to join me for a Tito’s because that’s what all of you seem to drink.

Certainly, the weirdest part is meeting all of these new people and realizing how much they already know about me. Stories of my wife, my kids, where I went to college, my make-believe friends from college, the fact that my dad called me Shithead when I was 8, and my aversion to mascots and Neil Young. Most of my closest childhood friends don’t even know all of that stuff about me. But 10,000+ of you heard every bit of it.

So, I won’t be taking another week off until Thanksgiving. And that’s cool. Because I’m still having a blast doing it.

Consumer confidence had another modest uptick over the past two weeks, even if it was white-knuckling at the end. The first thing you might notice if you read our latest write-up is that the link now takes you to MSN, because it’s now the “Microsoft News-CivicScience Economic Sentiment Index.” Our friends at Hamilton Place Strategies are still doing the expert analysis, so little else will change. All that said, we saw our second consecutive positive reading, buoyed mostly by enthusiasm for the job market. But if you look at the three-day rolling average, things ended on a sour note. That may be a harbinger of things to come.

But Prime Day(s) will still be epic. After smashing its own record in 2018, Amazon is expanding its Prime Day promotion to two days this coming Monday and Tuesday. And, if our historical data on the subject is any indication, this year will be bigger – at least in terms of the number of shoppers. Before Prime Day 2018, our data showed 25% of online U.S. adults intended to participate (with 5% having a particular purchase in mind). This year, intent jumped to 30% – a 20% YoY increase. The number of people with pre-planned purchases held steady at 5% – meaning all of those new shoppers will be there for a spree. Hold on to your hats.

Women will do the majority of Prime Day shopping because they do just about everything. I published a follow-up article this week (and did another Dr. Drew appearance) about a study I wrote for HuffPo three years ago entitled “Women are Getting a Terrible Deal,” exposing extreme inequities in household responsibilities between working moms and dads. Dovetailing the ass-kicking by the USWNT in the World Cup last weekend and following three years of high-profile gender activism in America, I had hoped we would see big changes. But no. Just subtle ones. And in some areas – like finances – things went the other direction. Guys, we suck. 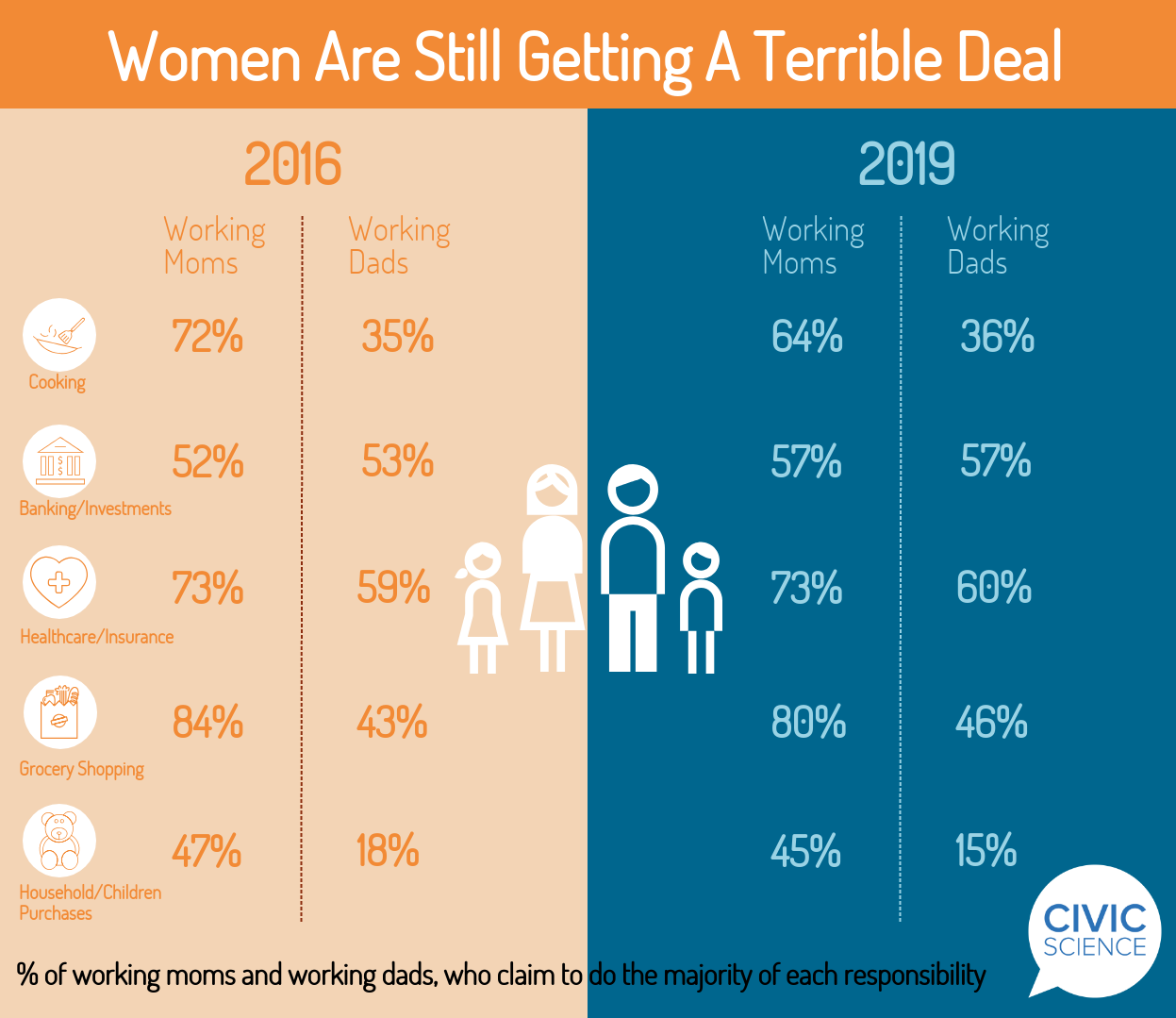 In related depressing news, there’s a gender savings gap, too. Go ahead and read about it if you want but, suffice to say, women are steadily behind men in the amount of money they’re saving for retirement or in having any retirement savings at all. One explanation in our data is a deficit in perceived financial literacy among women versus men, which is maybe something they would work on if they weren’t working on everything else.

On a few more enjoyable topics, here’s a quick flurry for you…

Although Americans on balance will spend a little less on summer vacations this year than last year (tax refund, anyone?), they still spend a lot – even if they’re already in debt. What’s interesting is how differently people approach their vacations, from how they travel, to how much they eat out, to whether they buy souvenirs.

More people than I imagined will be eating magic mushrooms on their vacations. This floored me. As cities like Denver and Oakland are decriminalizing “naturally-occurring psychedelics,” the public isn’t all that outraged. Fifty-eight percent of Americans are NOT fully opposed to legalization of ‘shrooms for recreational use, and a whopping 74% are not opposed for medical use. Trippy.

I was chastised a few weeks ago for saying I use a gas grill – but I’m not alone. Well, actually, 57% of people prefer charcoal grills. But the numbers flip among married people, parents, professionals, and the like. Because who the hell has time to wait for charcoal to heat up on a random Tuesday night, am I right?