Last Saturday might have been my favorite since starting this email. And that bar’s pretty high. The follow-up banter from all of you every week is the best.

But last week was something special. I heard so many touching (and hilarious) stories of mentors, mentees, and guardian angels of all kinds. It seems most of you can trace your career success to people who propped you up along the way. That’s so cool.

One very successful woman – who wasn’t even a reader of this email – forwarded me a note she received from a reader who was prompted to thank her because of my story. It literally made my day. And I was having a pretty awesome Saturday already.

It was a total love fest.

Then, there was this inspirational quote from a director-level exec at a media company you all know:

I’m thinking of using “Quit sending this shit you dumb MFer” as the new text for our unsubscribe hyperlink.

But wow. From his company email address even.

At some point in time, it became much easier to be mean than to be nice. I don’t know if social media was the cause, but it was certainly an accelerant.

Digital vitriol is just so addictive today. You can always strive for the last word, the sharpest barb, to feel better by making others feel worse. Accountability and consequences are nil. Until they’re not.

I’ve certainly been guilty of the occasional nuclear email. Sometimes, it’s just inadvertently terse or even misinterpreted. Other times, I’ve fully intended to light someone up.

But I work really hard to get better at it. Or, at least to break that glass only in the most extreme cases of emergency. There’s still a time and place for confrontation, like it or not.

Fortunately, I have people around me who aren’t afraid to check me when I’ve lost my cool. To talk me off the ledge of digital combat. I need that, for sure.

I’m just a dumb MFer, after all.

As we forewarned two weeks ago, consumer confidence took a complete nosedive in our latest reading. Yikes. Our Economic Sentiment Index fell so deep, so fast, it could suffer from the bends if it bounces back too quickly. Every indicator we track went down-and-to-the-right. Blame the President, blame economists and their recession fears, blame tariffs, blame anything you want, really. Remember that it’s all related. Let’s just hope this plummeting confidence didn’t happen quickly enough to hurt back-to-school retail. 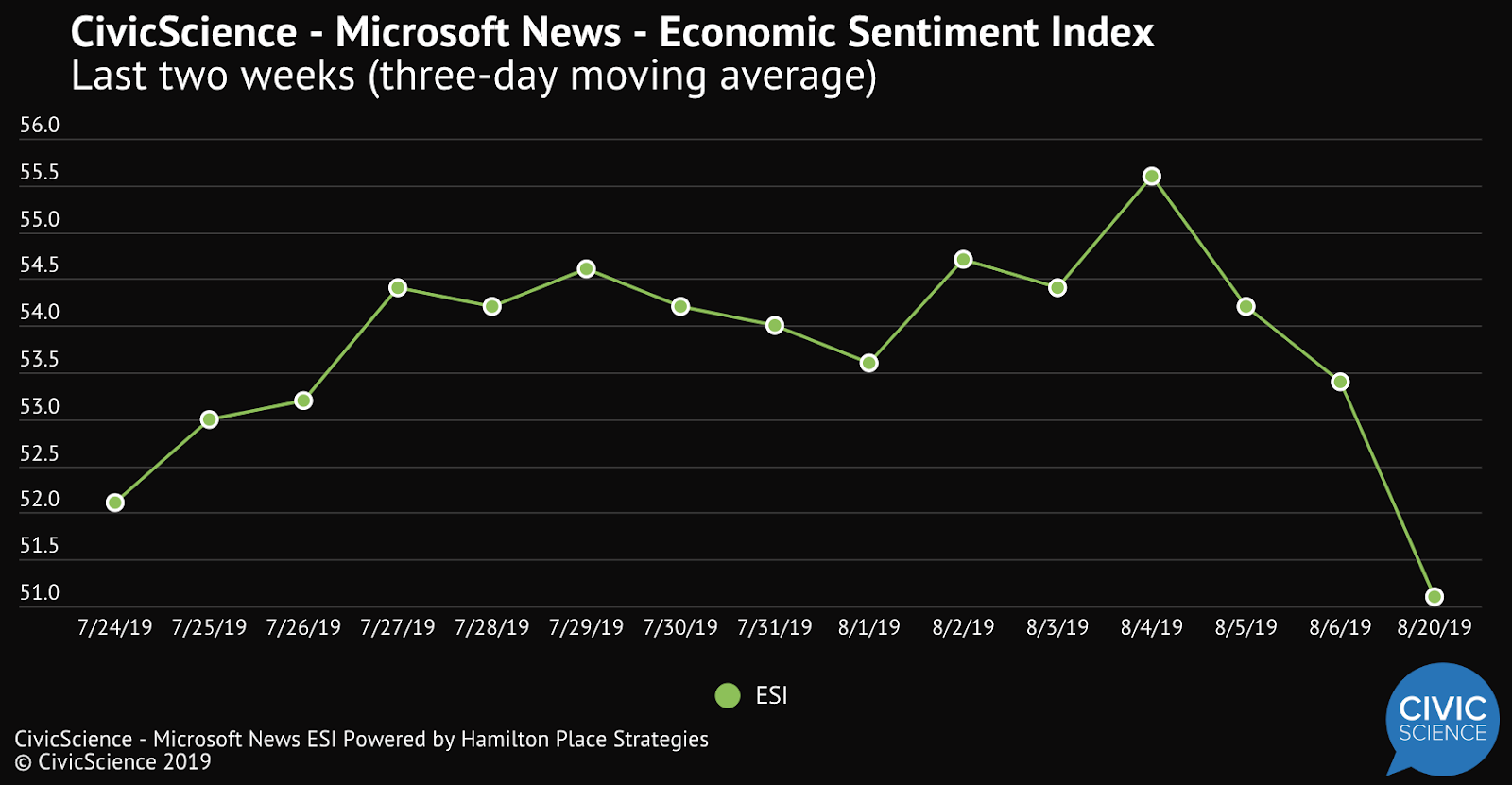 Sliding consumer confidence didn’t happen early enough to slow sales at Dick’s Sporting Goods. We’ve kept a close eye on this one because of the bold decision by Dick’s leadership to pull guns off its shelves and it seems to be working like a charm. On Tuesday, we reported a remarkable climb in favorability toward the brand over the past several months, and DKS’s earnings report on Thursday didn’t disappoint (unless you were a pro-gun zealot who forecasted doom for the company). I wonder if Walmart is paying attention. Probably.

Fantasy football just keeps growing and it’s boosting the NFL even further. I have my first of three fantasy drafts today, just in case you ever questioned my geek cred. This one includes Tara as a competitor, who beats me regularly, not necessarily because she’s a genius (she is) but because I’m the worst fantasy player in America. Still, I play anyway, just like tens of millions of other geeks. The number has even risen this year (legalized gambling, anyone?) and the NFL appears to be benefiting as a result. Interest in the upcoming NFL season rose for the first time since 2016, too. Maybe staying out of the political maelstrom helped. Duh.

Americans want more solar power and nothing else is even close. We did a quick study on the rise of alternative energy sources and despite the fact that I can’t look any direction in Western Pennsylvania without seeing a wind turbine, consumers are way more into solar. Nearly half of U.S. adults value solar energy over the next most popular source (nuclear) and almost four times more than wind energy. But keep an eye on geothermal power as it moves up the ranks, especially among homeowners.

People are getting more and more comfortable with facial recognition technology. How’s this for creepy? I get alerts on Facebook when my daughter shows up in a picture because, apparently, our faces are so alike, the app thinks it’s me. Crazy, right? You might as well get used to facial recognition technology because it’s not going away. And, indeed, over one-third of Americans are totally comfortable with it – including 40% of Gen Z. Although I’ve never told my daughter about the photo mix-ups, which could change her opinion considerably.

Even cloning animals is becoming cool with the younger crowd – and crazy cat people. Only about 20% of Americans believe it’s acceptable to clone a deceased animal, for any of a number of philosophical or practical reasons. When it comes to cloning pets, the numbers are even lower. But not everyone is freaked out. For one, men are three times more likely than women to believe it’s okay to clone deceased animals. And, while Millennials are 56%-25% “No,” the majority of Gen Z says “Yes.” Meanwhile, cat owners are nearly three times more likely than dog owners to say it’s cool to clone your pet. Cat people, man…

Here were our most popular questions from this week: