Americans Divided on What’s Most to Blame for Mass Violence

If you’re on Twitter, watch Piers Morgan, or read most national news, you would assume that gun control is the dominant social and polltical issue in America in the wake of the tragedy in Newtown, Connecticut. People on both sides of the gun control debate are piping mad. But, are they debating the issue that’s central to most Americans’ minds? No, they’re not.

Over the past week, we asked 2,388 Americans the following question:

The results were reweighted where necessary to represent the full US Population by age (13 and older), gender, race, and the region of the country in which they live. Here were the results in order:

The leading response, across most demographic, ideological, and socio economic groups is Media Violence. Coming in a close second was Mental Health Care. Third was Guns. Fourth and fifth, respectively, are “Not Sure,” and a Lack of Religion in Schools.

But let’s dig deeper. Exactly where and how are people divided on the issue?

The numbers are fairly consistent across the country. Media Violence and Mental Health Care are #1 and #2, respectively, in every region. The biggest difference can be found in the US West, where 25.4% of consumers blame Guns.  This contrasts with people in the US Midwest, where only 14.2% of blame Guns. Respondents in the US South broke slightly from the norm, with over 11.3% of people blaming the Lack of Religion in Schools.

Some of the biggest differences can be found across age groups. Every age segment from 18 to 44 chose Mental Health Care number one, except for those aged 13-17 — 44% of the youngest respondents blamed Guns. Respondents over age 45, however, all blame Media Violence. At the top, 44% of respondents over age 65 blame Media Violence. Interestingly, those aged 25-29 were the most likely to blame Mental Health Care at a whopping 42%.

The issue also varies across racial lines. Whites are 13% less likely than people of other races to blame Guns. Blacks, however, are the only group that rank Guns as the highest area of blame, at a full 33%. Only 14% of Blacks blame Mental Health Care. Hispanics meanwhile rank Mental Health Care high at the top of their list at 44%. Though representing a small sample, Asians and Pacific Islanders are the most likely to blame Guns at 38%.

Finally, our algorithms surfaced a few additional correlations that fall outside the traditional demographic splits.

–  People who consider themselves “Night Owls” blame Mental Health Care at a significantly higher rate (41%) than people who don’t.

– The broadcast TV network people watch the most is closely correlated with their position on the issue. Check out this chart: 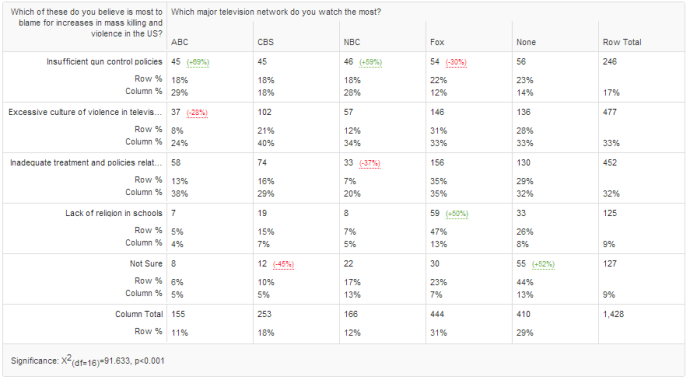 Blame for Guns is highest among people who watch NBC and ABC but they disagree on what’s most to blame. CBS viewers come down the hardest on Media Violence at a full 40%.

–  One more to make you scratch your head. Look at the differences among people based on the kinds of pets they like: 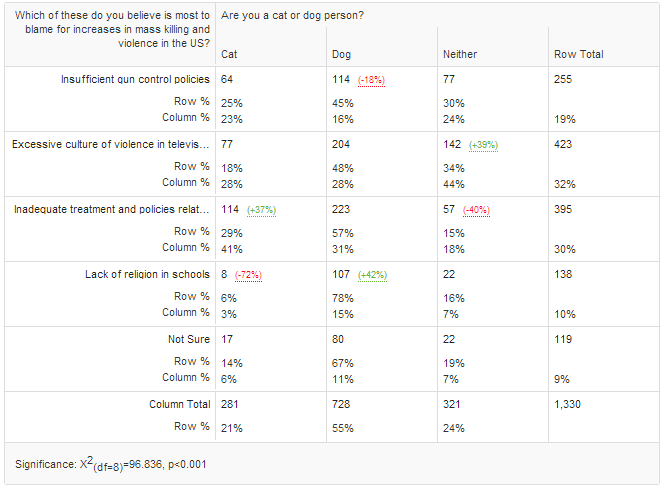 You can see that Dog people are less likely to blame Guns. Cat People, meanwhile, blame Mental Health Care at an extraordinarily high rate. People who don’t like either Cats or Dogs? They’re very likely to blame Media Violence. Have fun finding the logic in these numbers.

As our government and our society plot a course forward, following a year that brought us the horrific tragedies in Sandy Hook and Aurora, it will be interesting to see how priorities are set. While gun control is currently getting the most attention, it doesn’t reflect the priorities of most Americans. It may simply be the issue with the most vocal people on both sides. Maybe that’s all it takes.