As you might already know, co-working spaces are becoming all the rage. Partially, that’s because workspaces can be so expensive that having your own is somewhat of the new American Dream. In other ways, co-working spaces can be a way to fill the void of community that so many people may miss out on otherwise. Sounds good, right?

If not in a co-working space, many offices are turning to open floor plans, which have been thrown into the spotlight by major companies like Google and Amazon. In fact, 70% of U.S. offices now have an open office layout. Why, you ask? These spaces are meant to foster collaboration, creativity, and a transparent work environment. Unfortunately, these spaces might be much less productive than originally thought.

Given the saturation of these new work spaces, imagine our surprise when we ran the following question and came across these results:

Even when we consider that co-working spaces and open office spaces are much more geared towards Millennials, it seems that a similar story holds true: 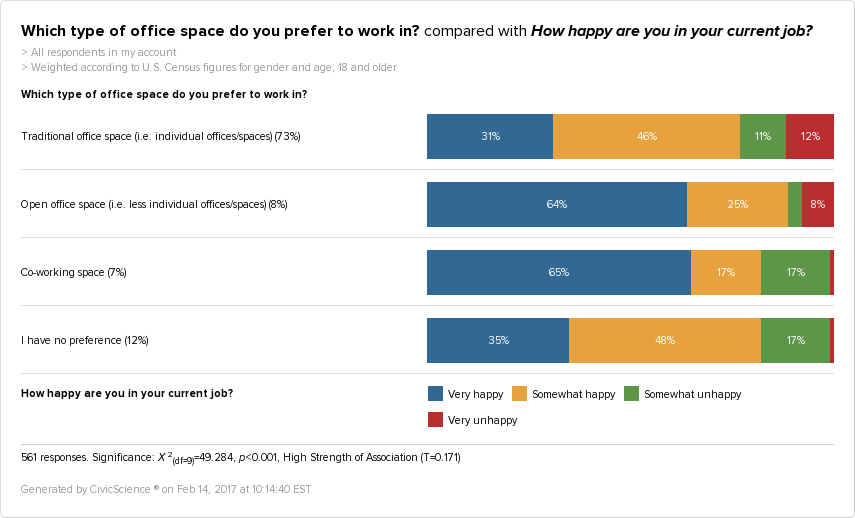 This is interesting, though not too surprising. People who prefer to work in co-working spaces are more likely to live in a city. This probably is due to the saturation of fun and innovative co-working spaces that are centered in major cities, and also due to the monumental cost of office space.

These simple demographics weren’t the only interesting tidbits we uncovered.

Companies might want to think twice before jumping on the co-working and open layout bandwagon. Although these spaces provide many benefits, and although they may be fun, it looks like most people are content with traditional office spaces. They might not be as loud, or as collaborative, but the numbers don’t lie.

Interested in other insights? Check out our recent posts on the growing fear of self-driving cars, the potential downfall of the NFL, and perhaps the scariest: Are Millennials Losing the Ability to Empathize?