How Are Consumers Reacting to Google’s New Privacy Policies?

A couple months ago, one of our crabby engineers (is that redundant?) loaded a question into our system testing Google’s famed “Don’t Be Evil” mantra to see if anyone actually believed they were, well, evil. We were particularly interested in looking at whether these numbers moved once Google implemented its new privacy policies last month.

Google would be happy to know that when we weighted the first six weeks of results, we saw that, overall, people have a positive view of the search engine behemoth (N=8,878). Only 20% fell into either “evil” category.

But then we took a look at the results since Google’s new privacy policies took effect on March 1. Since that time, opinions seem to have shifted somewhat (N=5,846). In the 5-plus week period since March 1, Google’s “Evil Rating” jumped to 26%, a 30% increase over the earlier numbers.

We can’t prove that these numbers shifted because of Google’s new privacy policies. But looking at one cross-tab in our system, it does appear that Google’s perception is most negative among people who are most concerned about consumer privacy in general. 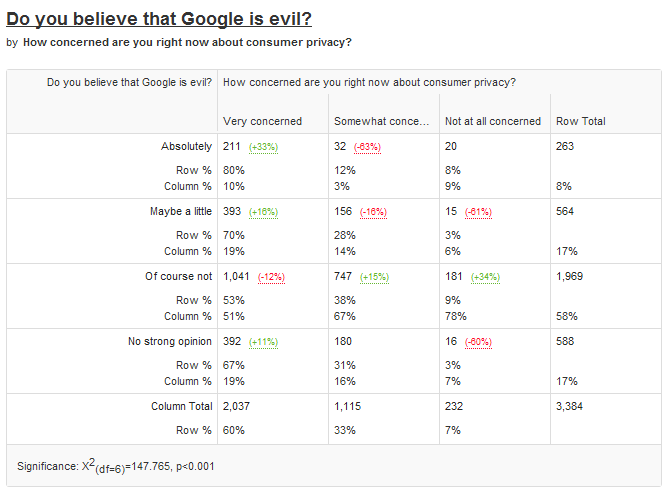 It will be interesting to watch these numbers over the coming months as people get used to OR forget about the new privacy policies. Stay tuned.