Moe’s has the Most Tech Savvy Fans, Chipotle the Most “Social”

Note: This is the first of a three-part blog series that CivicScience will feature on the chain restaurant industry in the U.S. Please check back in two weeks for our second post.

When compared to the full US population, America’s leading fast-casual Mexican restaurants draw a remarkably tech-savvy and social media-centric group of consumers. Among the three most prominent restaurants, Chipotle Mexican Grill, Moe’s Southwest Grill, and Qdoba Mexican Grill, Moe’s attracts the most tech-savvy diners, while Chipotle lands the most avid social media users. How do we know?

A recent CivicScience DeepProfile report analyzed over 282,000 survey responses from US consumers about their attitudes toward Chipotle, Moe’s, and Qdoba. After segmenting respondents who “love” or “like” each brand, CivicScience examined their answers to hundreds of other questions, comparing fans of the respective brands to each other and to the general public. Among the many topics analyzed, technology and social media usage emerged as major differentiators among these Mexican-crazed consumers.

The first graph below shows how fans of the three chains and the general population compare based on seven questions used to gauge the frequency and importance of social media usage in their lives. 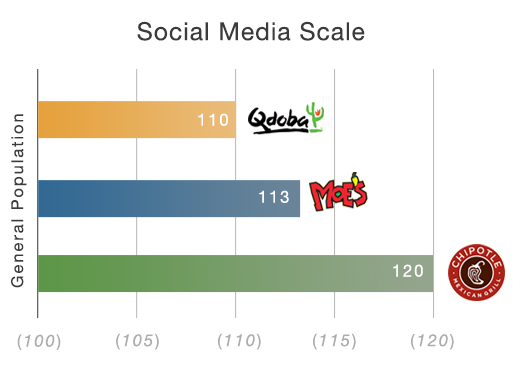 On the standard -100 to 100 point CivicScience scale, Chipotle fans occupy the highest spot followed by Moe’s then Qdoba. All three of the groups score significantly above average based on the General Population. For example, Chipotle fans are 54% more likely than typical consumers to be active on Twitter, while Moe’s fans are slightly more likely than fans of the other brands to be active on Pinterest.

The second graph visualizes the relative tech savvy of the respective restaurants’ fans based on eight attributes like smartphone and tablet ownership, gaming, and digital device “addiction”. 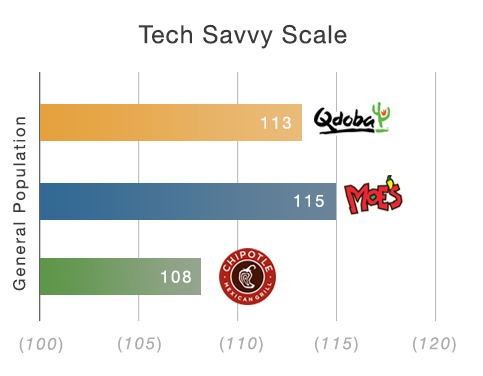 These numbers are closer, with Moe’s fans topping the scale, driven by high rates of ownership across device-types and a 32% higher-than-average likelihood to play online games. Qdoba ranks a close second due based on the highest rates of smartphone and tablet ownership; they also watch television online most frequently. Chipotle fans are the most likely to “multi-device,” which is consistent with their high rate of social media usage.  (To see how these scales are calculated along with a detailed list of the contributing questions, you can view an excerpt of the CivicScience DeepProfile report here.)

While each of the leading fast-casual Mexican restaurants attracts a tech savvy and socially-connected customer base, there are some interesting differences among them. Insights like these could impact how the three brands allocate their investments in mobile apps, social media advertising, or even video game cross-promotions. It’s a competitive space. Every little edge could help.

In two weeks: Check back for part two of CivicScience’s restaurant industry research.