Given all the latest news about the Steelers releasing Hines Ward (and then not releasing him) we thought it would be an interesting time to share some of the data we’ve been tracking for the past month. Because our company is full of geeked-out Steeler fans, on January 18th, we started running a poll across our network, asking simply: “Do you think it’s time for Hines Ward to retire?”

Since the poll started, we cataloged 5,699 responses to the question. When weighted to represent the Pittsburgh Metro area population (we had a few more male respondents than female), it looks like the majority of Yinzers want Ward to stay.

So then we decided to look at the most hardcore Steeler fans, wondering if maybe the people who followed the team most closely had a different opinion. The more serious fans felt even stronger that Ward should NOT retire, 55 No to 34 Yes (these charts may be tricky to read…look for the green and red numbers). 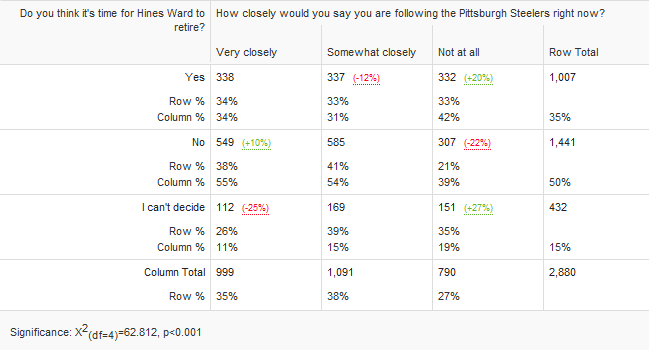 But then things start to get interesting. When we cross-tabulated the Ward question based on the Gender of the respondents, we see a different story. Male respondents actually would prefer that Ward retire by a slim margin (45Y to 43N), while Female respondents were strongly against retirement (64N to 21Y). 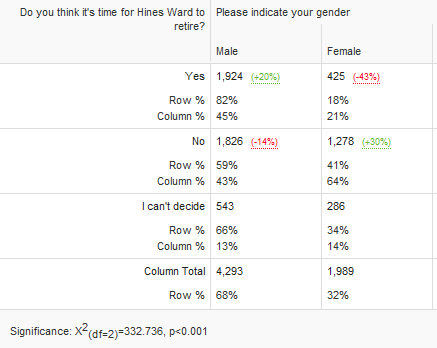 But when we dig a little deeper and look at the age of respondents, things start to look bleaker for #86. As you can see in the chart below, respondents in the key sports demographic segments were much more strongly in favor of Ward’s retirement. All respondents between the ages of 18 and 44 believe Ward should retire and by fairly large numbers in a few categories (From youngest to oldest: 46Y:41N, 49Y:36N, 52Y:33N, and 47Y:41N)

One more demographic breakdown and probably the most important one: Among Male-only respondents, the key age groups are significantly more inclined to vote for Ward’s retirement (sorry, this one is harder to read). But every age group from 18 to 44 wants Ward to retire by at least 19 points.

Lastly, and just for fun, we found 818 respondents in our network who answered the Ward retirement question and also told us last spring whether they would be watching Hines on “Dancing With the Stars.” Here we see a huge bias. People who watched Ward on DWS are far more likely to want him to keep playing. 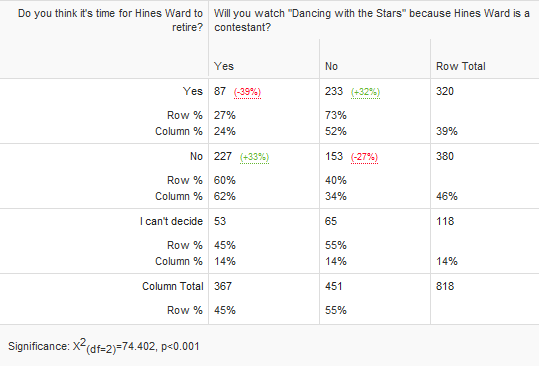 So there you have it. Maybe we have too much time on OUR hands. But it looks like the Steelers have a tough decision on THEIR hands.