Super Bowl XLVII by the Numbers

In the weeks leading up to the 2013 Super Bowl, we began tracking consumer enthusiasm for the event, their plans for watching the game (or not), their rooting interests, and their predictions. In all, we asked over 56,000 people different questions about the big game and cross-tabulated the results against a bunch of different variables. The final results were reweighted as necessary to reflect the full US population aged 13 and older. Here’s what we found:

Who’s gonna watch and who isn’t?

In all, (see below) 48% of consumers said they are Very Likely to watch the game. 20% said Somewhat Likely and a surprising 32% said Not at All Likely (what are you people going to talk about on Monday?).

Women are 40% less likely than men to watch, while people aged 18 to 24 are the least likely –39.7% of people in that age bracket say they are Not At All Likely. The largest group of non-watchers, however, will be women over age 65 (47% say they are Not at All Likely). Also, people who are currently unemployed are 36% less likely than those in the workforce to watch the game (maybe the Super Bowl isn’t the most fertile advertising ground for job-search websites after all).

On the other hand, people making between $100k-$150k in annual household income are the most likely to watch the game. By age, the highest viewership rate will be among those aged 25-34 and 35-44 (tied at 53.1%) Regionally, nobody is more excited to watch than those in the US West, where over 51% of respondents say they are Very Likely. In their defense, when was the last time a California team was in the Super Bowl?

Looking at race, Black consumers are by far the most likely to watch the game at a whopping rate of 67%, compared to just 48% of Whites and 41% of Hispanics. It appears the NFL still needs to work to attract the coveted Hispanic demographic.

Finally, wireless customers of Verizon (53%) and Sprint (56%) are the most likely to watch the game compared to customers of AT&T (51%) or T-Mobile (44%). Keep that in mind during commercials.

Where are the watchers gonna watch?

We then asked people where they plan to watch the game:

The vast majority of Americans will be watching the Super Bowl at home, especially those in  the US South and Midwest. 14% will go to a party at a family member’s or friend’s house, with the highest likelihood among people making over $150,000 in annual income. 3% say they will go to a restaurant or bar, with the highest rate among people in US Northeast (4.1%) and those aged 25-34 (4.5%). In this sample, 33% say they won’t watch (Yes, that’s different than the 32% in the first question. We call that margin of error). And, naturally, the number of people actually going to the game will be much less than 1%…that’s what we call a rounding error.

Who are they rooting for and who do they think will win?

We then asked people two questions, arguably the most important ones: Who are you rooting for? And, who do you think is going to win? Here’s what we saw:

Looking nationwide, the numbers are pretty close. The 49ers will have more people pulling for them by a 4-point margin over the Ravens. A full 44% of people don’t care (which means that approximately 12% of Americans will be watching the game with no rooting interest whatsoever). As expected, geography provides the strongest correlations, with support for the 49ers peaking among people in the US West (at 45.3% of all respondents) and the Ravens peaking in the US South (at 32.8%). The 49ers perform strongest among respondents aged 25-34 (at 39%) versus the Ravens who do best among respondents under age 18 (at 34%).

Who do people really think is going to win? Our chief data scientist Ross loves these questions because they reveal a great mix of factors like people’s preferences, their cognitive abilities, their social influences and a lot more. For now, here are the basic #s:

Again, we see an advantage for the 49ers. 44% of respondents pick San Francisco versus 38% who predict the Ravens. Only 18% of people are not sure, which means a large group of people who don’t plan to watch the game feel that they are still able to pick the winner. We can guarantee that Ross will hone in on these people in his post-game research to see if their predictions were actually MORE accurate, given that they are probably not biased by a rooting interest in the game. Conventional wisdom, conversely, would suggest that they are LESS accurate because they don’t follow football and/or know much about the two teams. More on this at the end…

Finally, we can share one interesting view into fandom and predictions. When we crossed the “likelihood to watch” question with the “prediction question,” look at what we saw (admittedly at only 775 respondents, there is a little more margin of error in these results but still): 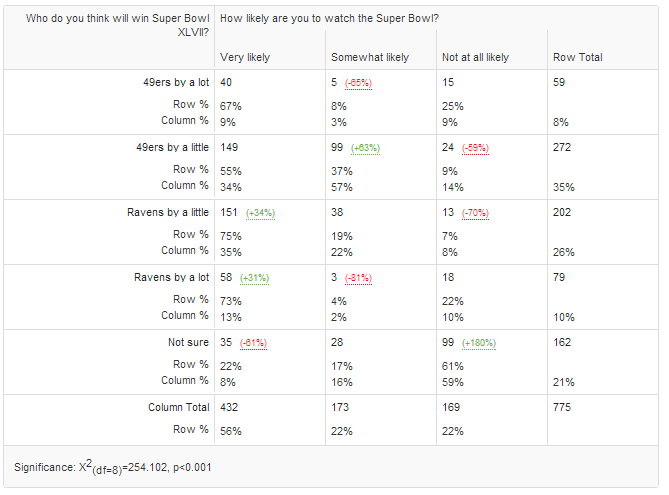 We see in the table above that the people MOST LIKELY to watch the game are also more likely to predict a win for the Ravens (48% to 43%) with 13% predicting a big Ravens win. Clearly, the 49ers gain their ground in the prediction game among the less avid Super Bowl watchers. Could that be an insight into whose predictions are more accurate? Time will tell. You can expect a lot more from us on “predictions” in the weeks and months ahead.