Infographic: 4 in 10 Americans to Send Holiday Cards This Year

The Gist: In 2018, tattoos have become mainstream, attracting interest from a wide range of US adults, including the well-educated, low-income earners, and the majority of Gen Xers and Millennials.

Ah, the tattoo. For some, the ultimate sign of self-expression, for others the ultimate sign of rebellion. Wherever you fall along the tattoo spectrum, there is no denying the fact that tattoos are becoming less and less hidden than they have been in the past. Just walk down the street and it’s not unlikely to catch a glimpse of body art.

This may be because 24% of US adults have at least one tattoo. While not the majority, it is not a fringe number either. And, 13% of US adults are hot on their heels, not currently having a tattoo, but wanting to get one.

As it turns out, the office may be a prime location for spotting some body art. 51% of those who do have tattoos are professionals or managers. 12% are in a computer, technical or medical field, and 14% are in operations or sales. So if you thought that tattoos were just for the indie bands and baristas, think again.

In fact, tattoo wearers and seekers may actually be coming from a quite a different crowd than you may have expected. 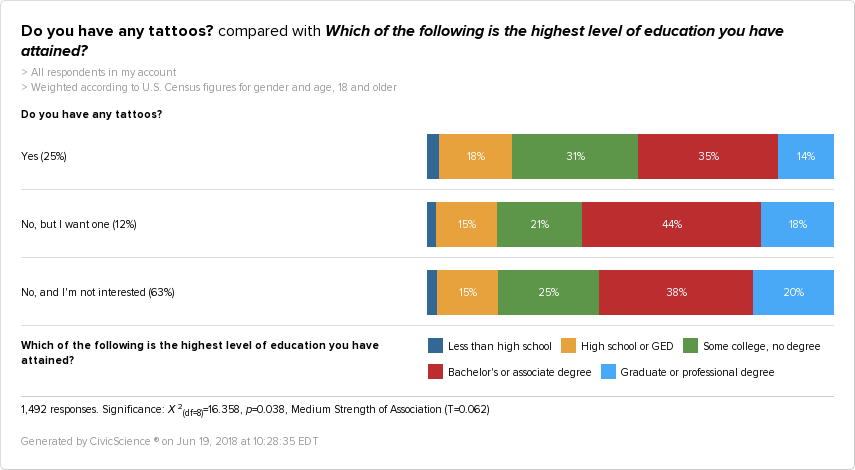 These days, tattoo hopefuls are prioritizing self-expression with a degree under their belt. Here, we can see that 35%–the largest percentage–of individuals who have a tattoo have earned a bachelor’s or associate’s degree. And of those who do not have a tattoo, but want one, 44% fall into that same level of education.

For better or worse, those dreaming of tattoos are also doing so without a lot of cash.

47% of those who do not have a tattoo, but who want one, make less than $50k a year. That said, low and mid-range income earners who already have tattoos are almost equally represented. This could indicate that tattoos are, in fact, a fairly egalitarian form of body art, with price points to fit any budget.

The gender split amongst tattoo hopefuls adds another layer to this discussion.

Among those who already have tattoos, women far outweigh men. However, men have a slight edge when it comes to those who want to get one. At this rate, it likely won’t be long before tattoos are equally common along gender lines.

Tattoos may also play a role in the creation of a personal image, as 45% of those with tattoos consider themselves more physically attractive than most people of their age and gender. Which, when you think about it, does make sense. If the purpose of getting a tattoo is to look a certain way, then one probably also feels that choice made a positive impact on their appearance. At least, that’s what our data would lead us to believe. There is something, it seems, undeniably image-focused that clearly appeals to the tattoo-adorned crowd, considering the fact that Instagram users are twice as likely to have a tattoo, as compared to others. Tattoo purveyors take note: sponsoring posts on Instagram may not be a bad idea.

When we break things down by age, we can see that we really are in the middle of a rising tattoo trend.

For once, it seems Millennials are not determined to disregard everything the older generations hold dear. 51% of those who have tattoos are Gen Xers, while 57% of those who want tattoos are Millennials. Could tattoo interest actually be a topic of bonding for the two demographics? It’s certainly possible. Especially if you live in the suburbs, where tattoo interest is high.

In 2018, it’s safe to say that tattoos are very well on their way to becoming mainstream. What may have started out as an element of counterculture is now popular among well-educated professionals, low-income earners, Instagram users, suburban dwellers, Millennials and Gen Xers alike.

So, if you’re looking to make a statement that shakes up society these days, tattoos just won’t leave a mark.