The Most Important Data We’ve Ever Analyzed

Ever since Google popularized the concept of 20% time, where employees can spend one work day per week dabbling in non-core work, apparently every software engineer in the world now thinks they’re entitled to it. So, a couple of our brilliant CMU savants had the earth-shattering idea yesterday of analyzing the critical differences in how people play the legendary game Rock, Paper, Scissors.  As you can see, 1,623 poor souls were subjected to answering the following question in the past 24 hours:

Clearly, Rock is the most commonly-used tactic in this highly-strategic game, followed by Scissors, then Paper was a distant third. Somehow 29% of Americans have never played the game.

We looked more deeply, however, and found that the tactics varied slightly by gender, where women were 21% more likely to choose Scissors. Men were more likely to pick Rock. See below. 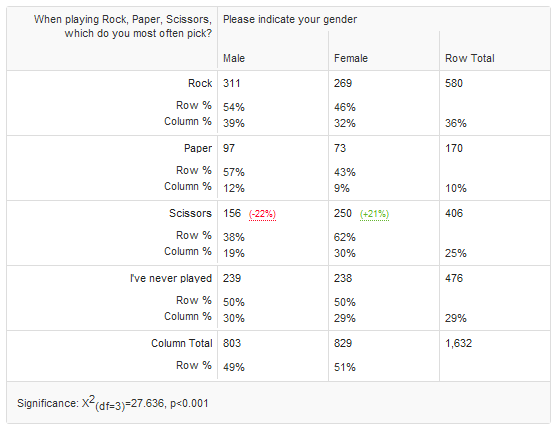 Then, we looked at the results by Party ID. While the day’s raw sample was tilted somewhat Republican, it is clear that Republican voters were also more likely to choose Scissors than people of other parties.

Congratulations. You may now be dumber for having read this.