A lot has already been written about why Mitt Romney suffered such a resounding defeat in last week’s election. Political insiders will attribute it most to President Obama’s unprecedented ground game, rooted in breath-taking applications of large-scale data and analytics. We fall squarely in this camp, perhaps for selfish reasons, because data science is religion around here.

But to the average voter, the nuances of micro-targeting, GOTV, and quantitative analysis are meaningless. Most of us will trace Romney’s loss to something more basic or, if you will, more “macro.” A few days after the election, once it had a few days to sink in, we surveyed 10,182 people age 13* and older in the US asking which, among a simple list of reasons, was most to blame for Romney’s defeat. Results were reweighted where necessary to represent the full US adult population by demographics and geography. (*- Yes, we included 13-18 year-old respondents, since most in this age cohort will be of voting age in 2016.)

Here’s what they said:

Overall, the largest number of Americans (48%) blame the defeat on a misalignment between the current Republican message and the general views of the US populace.  The second largest group either can’t decide, needs more time to figure it out, or simply doesn’t care. The remaining respondents were split at 14%, equally blaming the quality of Romney as a candidate and the relative strength of the Republican’s campaign strategy.

After looking at these topline numbers, we can run our cross-tabs against hundreds of different traits of the respondent group. A few obvious ones surfaced quickly. Look at the difference among respondents based on their party affiliation:

Democrats are more than two times more likely to attribute Romney’s defeat to the Republican’s out-of-touch message. The largest group of Republicans answered “Not Sure,” perhaps because they thought something else was to blame (voter fraud, for the conspiracy theorists) or maybe they haven’t had enough time to figure out (see: “shell-shock”). Still, among those Republicans who did have an opinion, the majority blame the Republican message. 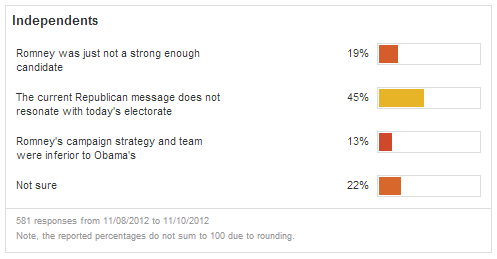 Then we can look at arguably the most important group, Independents. Overall they align closely with other voters, seeing a major discconnect with the Republican message. What’s notable here, though, is that Independents were nearly two times more likely than either Republicans or Democrats to blame the weakness of Mitt Romney as a candidate and less likely to blame the defeat on campaign strategy. Similar numbers were seen when we looked at respondents who identified themselves as Moderates, who were 25% more likely than others to attribute the defeat to Romney personally.

Next, we can look at some of the key demographics. Answers were remarkably consistent by Gender. But, when we examined results by Age, we begin to see a clearer divide. The charts below reinforce the notion that Republicans are losing favor among Millennials and late-stage GenXers. Displeasure with the Republican message peaks among respondents aged 25 to 34. At the other end of the spectrum, respondents over age 65 were more likely than other all other age groups to blame Romney’s strategy. 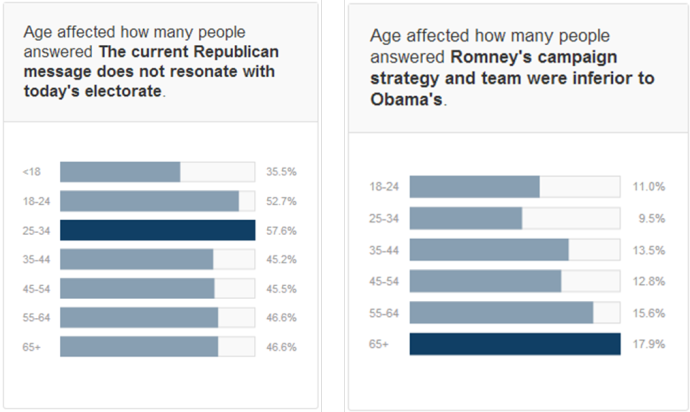 Then, we looked at the Race of the various respondents. Echoing what has been well-documented since the election last Tuesday, we found a high level of disillusionment among Hispanics with the Republican message. At 52%, Hispanic repondents were nearly 20% more likely than respondents of all other races to attribute Romney’s defeat to a disconnect with the Republican message. Black voters, meanwhile, were more likely to blame Romney as a candidate (at 17%) and the Republican campaign strategy (at 20%) than either White or Hispanic respondents.

Finally, we found a handful of interesting correlations in our deeper cross-tabs:

– People who belong to Twitter were 36% more likely than non-Tweeters to blame the campaign strategy, reinforcing our statement at the beginning of this post about political insiders.

– In the bizarre category, respondents who identified themselves as Night Owls were 18% more likely than Morning People to blame Romney as a candidate. Perhaps the late-night Romney-bashing of Jon Stewart and Stephen Colbert had something to do with it.

In the end, the overwhelming consensus is that the Republican message is most to blame for Romney’s sound defeat on November 6th. Even Republicans themselves acknowledge this problem. But, when we look more closely at the numbers, we see even deeper fractures among young and Hispanic voters, where the Republican message simply isn’t resonating.