f you ever wanted to know which major U.S. brand has the highest ratio of Democrats among its customers, you’ve come to the right place.

The most Republican brand is Pepsi. Papa Johns is right smack in the middle.

Of the few hundred brands we track, The Vitamin Shoppe has the highest proportion of cord-cutters among its fan base, followed closely by Fiat and Wawa. How’s that for an eclectic mix?

Wrangler-lovers are the most likely to still be tied to satellite or cable. TGI Friday’s has the most TV-tethered fans in the casual restaurant category.

One of our tracking questions asks people whether they think they’re more or less physically attractive than others their age and gender. Among retailers, Bloomingdale’s and REI shoppers are the second and third most likely, respectively, to say they’re better looking than their peers. #1 is a secret.

In their respective industry categories, people who wear Skechers and people who drive Chevrolets are the humblest about their appearance. Doritos-lovers are up there too, which I find surprising because Doritos are awesome.

Jimmy John’s has the highest proportion of price-sensitive diners in QSR. Chipotle has the least price-sensitive customers in fast casual dining. That’s why Chipotle can keep jacking up prices with abandon.

Sure, there are outliers. I’m a raging narcissist who loves Doritos and a cord-cutter who hates Wawa (Sheetz is infinitely better).

Things also change. Carhartt fans are significantly more price sensitive now than they were two years ago, outpacing the shift among other apparel brands. Kanye West fans are way more Republican than they were six years ago (we track celebs too), because, well, you know.

I’m always flabbergasted by how much money companies spend on “brand trackers” as key performance indicators for their business, as if popularity in the aggregate is an actionable measure. It’s a beauty contest at best – a soothing, misleading blanket at worst.

You have to look deeper. The “who” matters more than the “what.”

And, if you want to see where your brand falls on these lists and countless others, give us a shout.

The rebound of consumer confidence was short-lived. So much for that. After a promising jump in the first half of April, our Economic Sentiment Index turned sour again this time around. Declining confidence in the housing market and major purchases were the biggest drags on the index – the rise of interest rates is likely a major factor here. The only non-sucky number indicator was confidence in personal finances, likely aided by welcome tax refunds. Household bank accounts remain resilient – by a thread. Hopefully, that provides enough buoyancy to keep us from talking ourselves into the R word.

In better news, Americans’ overall well-being improved dramatically in April. As the initial shock of the war in Ukraine subsided, the weather began to improve, and COVID lost its two-year grip on our psyche, U.S. adults reported much lower levels of stress, fear, and anxiety in our monthly Well-Being Index. We’re still far from the highs of last June, when vaccines bred COVID optimism and inflation was only beginning to enter the equation. There are notable geographic differences, with southerners and Texans reporting the highest overall numbers. Well-being in the U.S. West and Midwest lag behind the rest of the country. 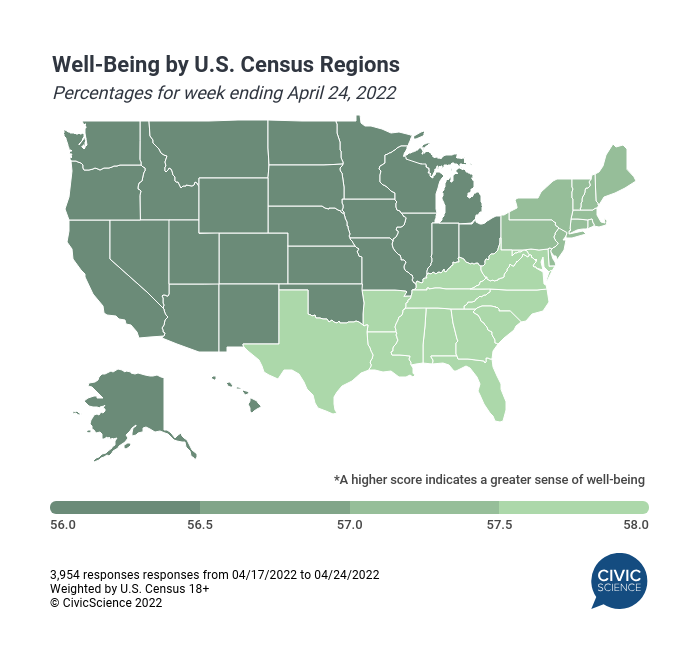 ‘Tis the season for allergies. Over two-thirds of Americans (including yours truly) suffer from spring allergies, with 16% saying their allergies are “severe.” People in the U.S. South have the worst allergies – which apparently isn’t enough to impact their overall emotional well-being (at least not yet). Meanwhile, 41% of U.S. adults are “very likely” to purchase OTC meds to treat their allergies, and big chain pharmacies like CVS and Walgreens are the most popular places to buy them. Incidentally, the most frequent allergy med users also majorly over-index as cannabis users. Benadryl is the most trusted OTC brand (not including yours truly – Benadryl whacks me out), but it’s a highly competitive market. I’m on Team Zyrtec.

Netflix is a victim of its own success. News of subscriber losses at Netflix shook the stock market last week, but it’s hard to understand why everyone was so surprised. Content consumption is mostly a zero-sum game and, while cord-cutting continues to grow, audiences are increasingly fragmented across platforms. Forty-three percent of people who stopped or canceled Netflix in April 2022 primarily watch TV via streaming – which means they’re getting the content they want from other services. Netflix brought these people into the streaming universe, created the market for other media companies to enter the fray, and naturally opened themselves up to intense competition. As we told you last year, an ad-supported subscription could bring new Netflix users into the fold, but it wouldn’t be massive. They have to win on content.

COVID caution might officially be endemic. According to our latest COVID Recovery and Consumer Spending Tracker, comfort levels being in most public settings (restaurants, concerts, etc.) seem to have plateaued over the past month, with travel and vacations representing the only growth area during that period. This suggests we’re settling into a scenario where roughly 20% of U.S. adults are going to remain cautious about being in public, no matter the state of variants, cases, and vaccines. This is a crucial consumer segment you should be thinking about in your strategy – as this may be their permanent normal. Also in this study – inflation is clearly causing changes in grocery buying habits.

A few more studies from the CivicScientists:

The Trending Questions of the Week:

Answer Key: Bloody Mary but I like all of them; Energized!; I don’t think, I know it’s social media, and it’s not even close; Who hasn’t?; More than I talk to humans.