For any given survey question in our system right now, we can cross it with approximately 90,000 others. At an average of five answer choices per question, that’s about 450,000 possible answers. That means there are about 202.5 billion answer pairs we can cross at any given time.

It’s growing ever faster, too. Remember when I bragged a few weeks ago about getting more than 5 million responses to our polls in a day? We’re now regularly over 7 million. It should hit 10M/day by August.

When we explore all those answers with the magic box our Carnegie Mellon geniuses built, some of the relationships we uncover are mind-blowing. One of my all-time favorites – which you’ve heard if you’ve seen my keynote speech – is the remarkable correlation between owning a Samsung phone and having a history of heart disease in your family. It’s true.

Also, there’s no archetypal group of people in America – people about whom we can reliably predict the most attitudes, behaviors, and interests – than evangelical Christians. You’ll find no greater homogeneity in any population cohort you can think of.

Discoveries like these just keep coming and coming in the days of COVID-19.

Today, we’re trying to predict which groups of consumers, which industries, which activities, which brands, and which products are going to bounce back first. Or last. Yes, political tribalism and geography are huge influences. I’ve beaten those horses to death.

But after we screen for all of the obvious political and demographic proxies, we find really fascinating, often head-scratching things.

Or check out this craziness:

If you’re basing any of your COVID forecasting or planning on research from traditional paid survey panels, tread lightly. You’re talking to a different breed of cat.

You know our mantra: Everything affects everything. And it’s true. But some things – often wild and unexpected things – affect each other more than you could ever imagine.

And that’s why we do what we do.

If I’m worried about anything recovering from this crisis, it’s the performing arts. Of all the things we’re tracking – concerts, shopping, workplaces, restaurants, you name it – nothing has a bleaker outlook among consumers than major sporting events. That is, until you look at things like the opera, the ballet, the symphony, and musical theater. Women and older adults are the most cautious, in general, about leaving quarantine. Unfortunately, that’s exactly who dominates arts attendance. Say a prayer for Broadway my friends. 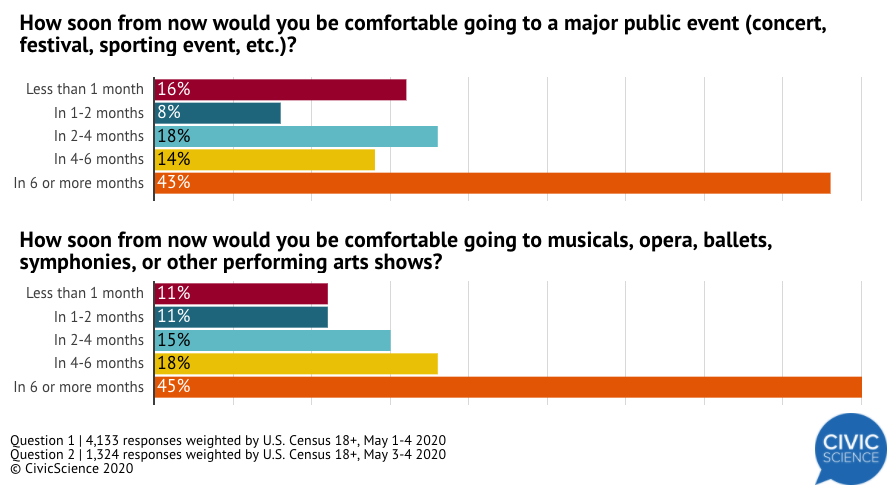 As the economic consequences of the crisis begin to sink in, concerns over tariffs keep climbing and climbing. A whopping 71% of Americans are now at least somewhat concerned about the impact of trade policies and tariffs on their household expenses. That number jumps even higher among people who have lost their jobs or had their pay cut over the past two months. I normally keep my political opinions to myself here – or at least I keep them murky – but tariffs are stupid. Let’s not kick consumers while they’re down.

Bet long on plant-based meat by the way. You don’t need to hear this from me. It’s pretty easy to read 100 articles about the meat shortages and jump to the conclusion that non-meat alternatives are going to see a boom in the coming weeks and beyond. According to our humble little database, the percentage of U.S. adults who have indulged in plant-based burgers and such has jumped 20% since December. It won’t stop there.

In (sort of) related news, all-natural cleaning products have a bright future post-COVID. At this point, we would probably rename one of our kids “Clorox” to get our hands on a case of disinfecting wipes. But once people can start being picky about their antibacterial cleaners again, expect a surge in all-natural and sustainable products. The category is already up YoY. Demand is even higher among parents of young kids.

A bunch of people got stimulus checks and stashed them away. While 43% of Americans used their federal stimulus checks to pay down bills or purchase much-needed necessities (if you email to tell me that was redundant, we’re breaking up), an almost-equal 39% put their checks in savings. Naturally, folks who lost their jobs were much more likely to spend it on debt or necessary items. Those few fortunate folks who aren’t working but are still getting paid used their checks to splurge on a treat. How nice.

Women are way better at this whole quarantine thing than we are, fellas. There’s a bunch of awesome stuff in this study about remote work – for one, remote workers are feeling no more productive now than they did pre-crisis. Gen Xers are the most productive because Gen X and women are way, way more productive than dudes. Forty-one percent of women say they’re more productive at home than at work, compared to just 29% of guys.

Productivity aside, nearly half of remote workers say they’re working more than they did pre-COVID. Count me among the stats here. Although I’m sleeping about the same, 48% of Americans say they’re sleeping more or less than they did before. Fatigue is a big problem for a ton of remote workers – especially those who are being the most productive –  including one in five who report “video chat fatigue.” Lots more on that stuff here.

People in the Midwest are more likely to ignore social distancing rules to see mom on Mother’s Day. Also, brunch is off the table. That and a bunch of other stats in this fancy little infographic. 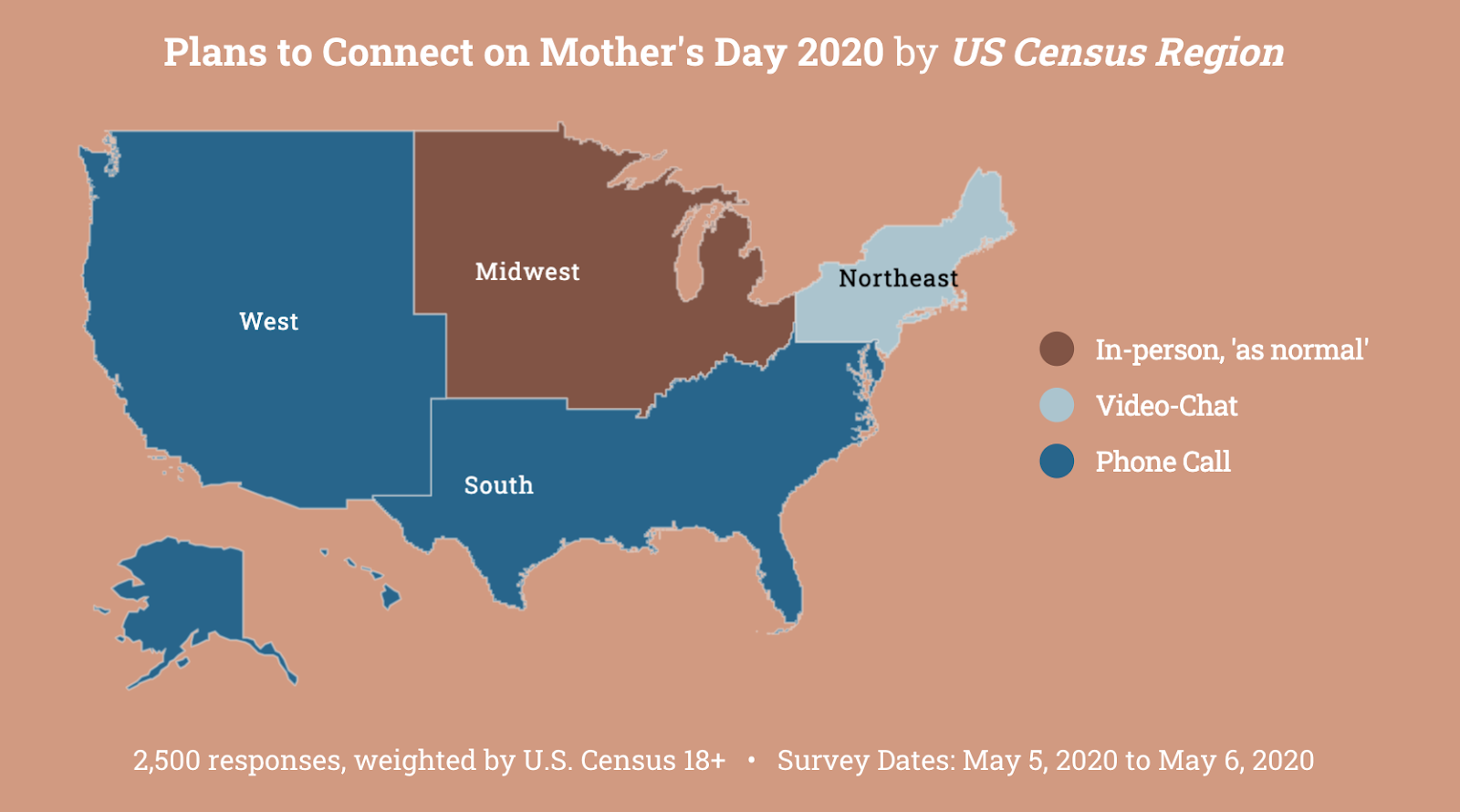 Our prolific team of rock stars published other studies too:

Oh, and more than 1 in 4 Americans believe aliens have visited our planet. It’s the most popular classic conspiracy theory. All of which are still more plausible than any of the conspiracy theories I saw on Facebook this week. 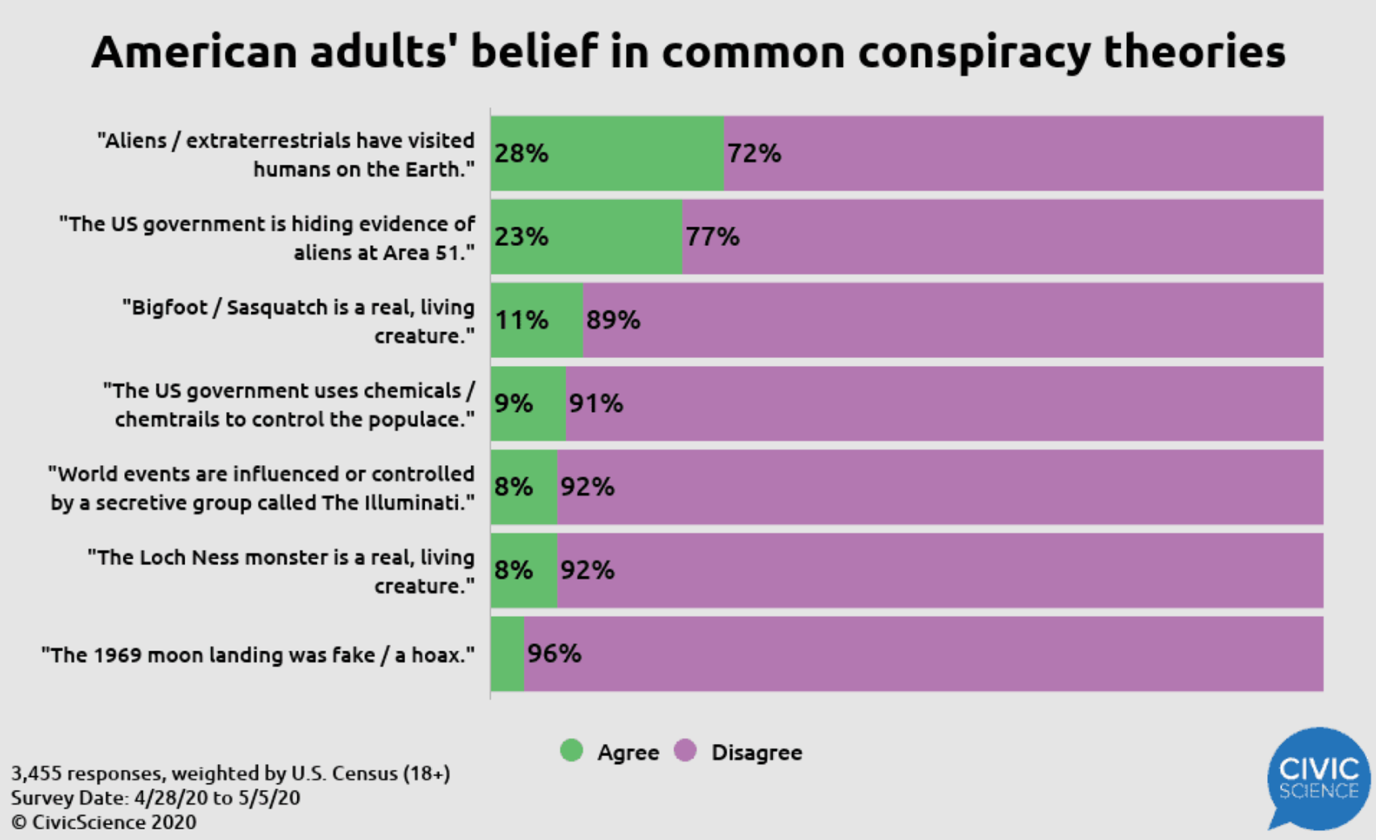 And these were the most popular questions on our platform this week: