It’s weird being in a business that benefits so much from uncertainty.

The unknowns of COVID were a windfall for our topline. Then came the economic socio-political chaos that drove our record growth in the first half of this year.

It feels like bad karma to even talk about it. But here we are.

That’s the funny thing about information services companies, particularly real-time and predictive ones like ours. They’re recession-proof. Enabled, even. Airplanes don’t need radar on a clear, calm sunny day. They need it when it’s dark. When it’s windy. When it’s foggy and rainy.

Are we in a recession right now? Depends on what definition you want to use or what your political motives are. A lot of recent corporate earnings, consumer spending, and yesterday’s massive job numbers (called it!) suggest otherwise. But there are definitely enough clouds forming to turn on your headlights.

​​​​​Ad spending is always the canary in the coal mine of a market downturn, and it’s widely reported that the canary is getting drowsy. Marketing is the easiest thing to cut. CFOs are perpetually cynical about advertising, mostly because we still do a terrible job of quantifying how well it works. Watch if brands pull back as Black Friday approaches. Then you’ll know it’s real.

Hiring freezes and layoffs have started, though they seem prophylactic at best, and a disingenuous counterpunch against rising wages and a frothy job market, at worst. Let me know when you see the first article about corporate execs taking pay cuts. Just don’t hold your breath.

For now, I lean toward the less-pessimistic end of the economic apocalypse spectrum. Two-thirds of consumers are still equal to or better off financially than they were before COVID and they over-index higher income. Don’t be surprised if aggregate spending remains pretty resilient through Christmas (i.e., don’t cut your advertising, just be smarter about it).

But that’s just what I think today. By tomorrow, today won’t matter. Pilots only look forward – and maybe to the side.

Hence our whole “everything affects everything, and everything is constantly changing” mantra. If you limit your field of vision, even just a little, you might get blindsided.

So just keep reading (and buying) our stuff.

All that being said, consumer confidence dipped slightly over the past two weeks, but my non-pessimism isn’t waning. After a month of solid gains, our Economic Sentiment Index backslid a tad in the latest reading, while still sitting safely above its June low point. I’m chalking this up to consumers’ knee-jerk reaction to the Q2 GDP numbers (expected) and the jump in interest rates (necessary). Nothing more.

Nearly every other signal in our data suggests that people are feeling better. First, consumer concerns about inflation and gas prices have fallen precipitously in recent weeks, reaching their lowest levels in six months and four months, respectively. Reported and/or anticipated household spending cuts have shrunk in every purchase category, except grocery, over the past week. Meanwhile, even with everyone I know getting COVID in the past two months, concerns about being in various public settings have barely budged since March. Whatever the new normal is, we’ve reached it. And finally, 45% of U.S. workers say their current employer is struggling with staffing shortages “more than usual” right now, versus just 11% who say “less.” This is not because of layoffs. (Oh, and if you don’t subscribe to our Consumer Financial Health Index, what are you doing?)

Monkeypox was declared a public health emergency on Thursday, but as of Thursday night, most people don’t plan to get vaccinated against it. EOM.

Americans are noticing unusually hotter weather in their area, as long as you don’t call it climate change. As record heat waves rage across the country (and world), 52% of U.S. adults say the weather where they live is much warmer this summer than in recent years. Amazingly, that percentage drops to just 19% among people who say they aren’t concerned about climate change. Rural residents are much less likely than city residents to say they’re noticing hotter weather this summer, even as states like Alabama saw temperatures in June as much as ten degrees above historical norms. This is one of those times survey data answers a different question than the one you asked. 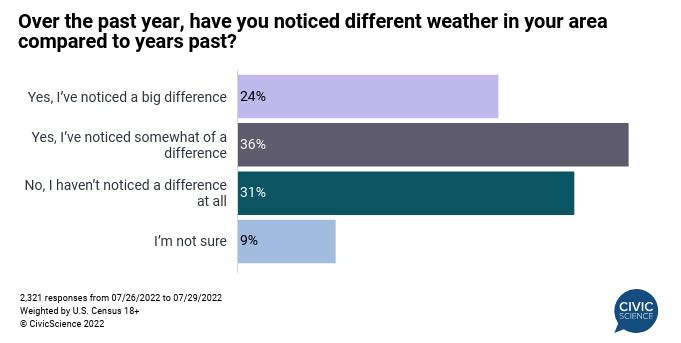 In related news, the percentage of people who believe Bigfoot is real, the Loch Ness monster is real, and that aliens have visited humans on Earth have all increased since 2020. Have fun reading this study – and yes, believers in Bigfoot are much more likely to love The X-Files.

The COVID era pushed more people – especially young ones – to urgent care facilities. Since the beginning of the pandemic, over half of Americans report having experienced scheduling difficulties when trying to see a doctor. In just the past year, a full 35% say they visited an urgent care instead and that number jumps to 55% among Gen Zs (partly because they don’t wait for anything). Healthcare disruption is coming.

Either because of inflation or in spite of it, people are spending more on back-to-school shopping this year. Like I said earlier, consumer spending continues to be remarkably resilient, for better or worse. Forty-one percent of school-shopping Americans say they’ve spent more this year than last year – and last year was much higher than 2020 (asterisk) or even 2019. And the trend of early shopping is continuing as well. Twenty-seven percent of shoppers had over half of their provisions in hand by the end of July, up from 15% during the same period in 2019. The Dick family is definitely not in that group. (By the way, we launched our vaunted 2022 Consumer Holiday Tracker last month, but it’s only for cool people.)

This week’s most popular questions:

Answer Key: Confident; Yellowstone, because I haven’t watched Breaking Bad (gasp!); Never; I have; Very; No – that’s messed up.

(PS – I’m super disappointed by how many of you missed the Easter Egg in my answers last week.)