I genuinely don’t know if our youngest daughter believes in Santa.

She’s 12, so I doubt it. But she has an incredible poker face. And nobody wants to ask her.

Her name is Noelle because we thought she’d be born on Christmas (it was New Year’s Day instead). And she takes the season really seriously. We’re not allowed to listen to a single stanza of holiday music until Thanksgiving. Advent calendars, decorations – everything – have to be done the same way, at the same time, like clockwork.

We play this game where the four of us ‘draft’ traditional holiday songs, 10 each, fantasy sports-style. Starting December 1, we play 5-day, 1-on-1 round-robin matches, earning points when our songs are played on the radio. We listen only to Holiday Traditions on SiriusXM and at least two of us have to be together for it to be official.

After three round-robin matches, we seed the teams, play a semifinal, then a championship, ending on Christmas Day. Copious stats are kept. Much shit is talked. It’s serious business.

If you thought your family’s matching Christmas pajamas were dorky, hold my beer.

Anyway, Noelle has won the championship every year – 3 for 3 – and she’s leading again.

Her sister wised up to the Santa thing pretty early. It was our fault. We were ambitious one Christmas, getting twin chinchillas “from Santa” for the girls. Little did we know Maddie had a deep, horrifying fear of rodents she never told us about. Oops.

A few weeks later, Maddie cornered me at that same Mexican restaurant where she told the racist joke to the Hispanic waiter and, later, where she yelled “I love Dick!” for every patron to hear.

Shrewdly waiting until I was two margaritas deep (the cantina is walking distance from our house, no judging), she says sternly, “There’s no Santa, is there daddy?”

Me, flustered: “Um, why would you say that honey?”

“Because a real Santa never would have brought me chinchillas.”

And that was the end of that.

We’re still clinging to the magic with Noelle. If anyone will live their whole life believing Santa is real, it will be her. And I pray she does. Because why not?

Whatever you believe this holiday season, I hope it’s full of magic.

Consumers continue to be jolly about the economy. Our Economic Sentiment Index had its fourth straight upward reading, as the holiday season kicked into full gear. The gift of a strong jobs report certainly helped, as did the further buzz around a potential trade deal with China. Numbers still haven’t rebounded to their mid-summer peak, but the steady incline should bring joy to the world. At this point, it will be a surprise if holiday retail sales aren’t elevated as a result. 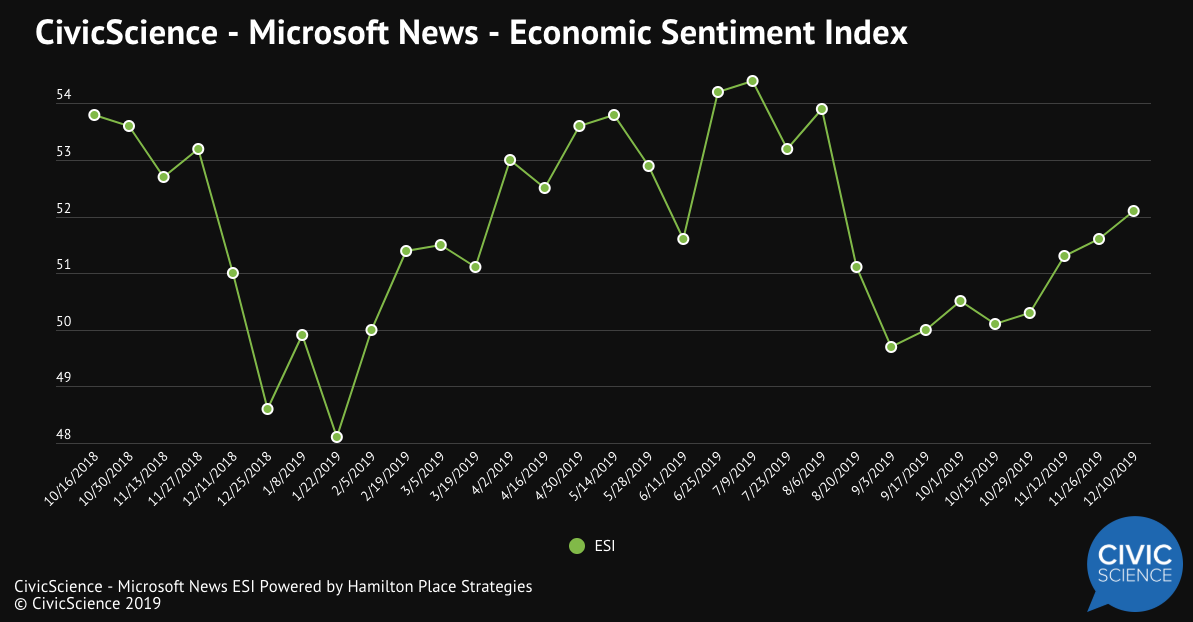 Tech products will be big this shopping season – especially among the gray-hairs. Our latest tracking data says that computers are the most desired tech product this year, followed by smartphones and smartwatches. Interestingly, though, the group most likely to purchase electronics as gifts this year are Baby Boomers, by a large margin. Makes sense if you think about it, but it wouldn’t have been my first guess.

The idea of an ad-supported version of Netflix isn’t an awesome one. Rumor has it, the folks at Netflix are toying with the idea of an advertising-laden varietal of the platform. Only about 7-8% of Americans are “very interested” in the concept, split evenly among current Netflix subscribers and non-subscribers. The problem for Netflix is that current subscribers are more than 2X more likely to be “somewhat interested,” meaning that an ad-supported subscription could be more apt to cannibalize existing customers, rather than attracting new ones.

Speaking of ads, we’re still really lousy at making them relevant to people. One of the ways media companies rationalize all the creepy data they gather about us is the benefit of delivering us more relevant ads and content. But even with all of that data, the vast majority of ads suck. Less than one-third of U.S. consumers believe the digital ads they encounter are even “somewhat relevant” to them. Considering the $100+ billion spent on digital media in the U.S. this year, those are embarrassing figures.

Kohl’s is more popular than TJ Maxx but sometimes that’s not what matters. The two retailers surprised Wall St. in opposite directions this week, with TJ Maxx beating estimates while Kohl’s missed. If you looked at our top-line data, you would’ve been surprised too, as Kohl’s is generally better-liked among U.S. consumers. But when you carve up the numbers, a different story emerges. A lot of Kohl’s popularity is driven by men, who do far less shopping than the women who prefer TJ’s. In-store (versus online) shoppers and “spree” shoppers also lean toward TJ Maxx. Add all that up and you can see why they’re winning.

Peer-to-peer car sharing is a new thing and it has potential. A few companies you’ve never heard of, like Turo and Getaround, have popped up enabling people to rent cars from each other (think Airbnb, but for cars) rather than using a pricier rental car company. Although overall awareness and penetration for these services is still very low, interest and intent among Gen Z’s and younger Millennials are remarkably high. Don’t be surprised to see this trend grow.

We also published a handful of other studies this week, including a look at the rise of gender-neutral children’s toys; how hacking fears are keeping a bunch of people out of the Smart TV market; and the competitive gaming console landscape.

And, of course, here are the most popular questions this week: