Why am I not surprised?

The sex study I shared last week was – by a mile – the most clicked-on link in the two-and-a-half-year history of this email.

What kind of attention-seeking writer would I be if I didn’t pander to your obsession with carnal data? So, I spent a few hours this week crawling under the sheets of our database to see what other naughty bits I could find.

To be clear, that doesn’t mean you can bust out of whatever drought you’re in just by chugging a 2-liter of Pepsi and bingeing The Marvelous Mrs. Maisel. We’re talking about correlation here, not causation (although, watching Mrs. Maisel with your favorite other couldn’t hurt.)

You may be surprised to know that people who “love” the movie A Christmas Story are 51% more likely to get laid at least a few times a week. People who are close friends with at least one colleague at work are way more likely to have sex daily because of course they are. And people who love sriracha. And avid NBA fans. Oh, and Pinterest users. They score like crazy.

At the other end of the spectrum, people who use the voice assistant on their phone are way LESS likely to have frequent sex. And AT&T wireless subscribers. And people who watch a lot of reality TV. People who live in the U.S. South get it on the least. Presumably because it’s warm and sunny and they’re outside doing something else.

The way our magic technology works is that it takes one question, crosses it with a hundred-thousand or so others in our database, and rank-orders them based on which ones are most predictive of the question we started with. Often, the highest-ranking questions are unexpected.

And which question was the single best predictor of how much sex people have?

“Billy, Suzy, can you take the dog for a quick walk?”

In surely unrelated news, dog ownership is rising fast, particularly among Millennials. For the first time since we started tracking this five years ago, the rate of people who only own cats has dipped to the lowest of all pet-owner categories (behind people who own a cat and a dog).Dog-only households are rising fast – especially among Millennials who are finally buying homes to go along with them. In just two years, the number of Ms who own one or more dogs jumped from 25% to 34%. Hopefully their kids are helping out.

Last thing about pets, I promise, but Walmart has a big hill to climb with Millennials if its in-store veterinary concept is going to take off. News came out of Bentonville last week that Walmart will be opening a ton of veterinary clinics in their stores, which is a smart move on paper as the aforementioned Millennials and Gen Zs dive into the pet game. The problem, as we see it in our data, is that those younger pet owners are far more favorable to Target and Amazon. Maybe this move will help Walmart overcome that gap. Or maybe it’s an insurmountable hurdle. We’ll see.

Everybody is prejudiced. You may have seen that I was Twitter-famous for a hot minute last week after sharing this:

It has 6 million views, 25,000 retweets, and a bunch of secondary news coverage, including myfirst-ever Snopes entry. People on Twitter, especially Liberals, love being smug. Meanwhile, Conservatives jumped down my throat, saying the poll didn’t show bigotry, just ignorance. (Be honest, did you know our numerical system is Arabic?) The point is BECAUSE people didn’t know, we can learn a lot from how they answered. So, I shared the chart below, asking if Republicans were just 2.3X more “ignorant” than Democrats or just more prejudiced. Checkmate. 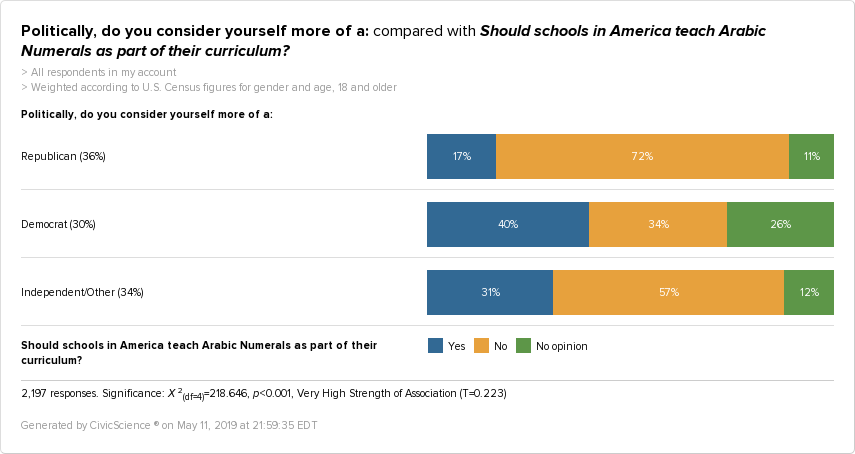 But I repeat: EVERYBODY is prejudiced. After getting Lefty-Twitter riled up and proud over being so much more virtuous than Righty-Twitter, we shared this: 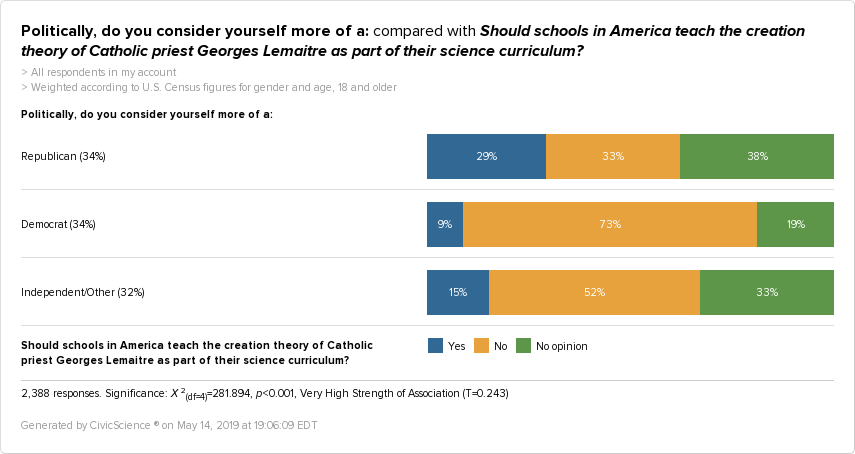 The symmetry is almost too good (or sad) to be true. Like me, most people didn’t know Lemaitre was the father of the Big Bang Theory and, again, people revealed biases in their answers. Republicans were 3X more likely to ‘get the answer right.’ A whopping 73% of Democrats said no. Why? Because many of them are blindly prejudiced against religious-associated theories, the way many Republicans are blindly prejudiced against anything Arabic. Welcome to 2019, folks. Branding is everything. Also, tribalism. Lots and lots of tribalism.

Consumer confidence climbed just a little over the past couple weeks, even as rising fuel costs and other things dragged on personal finances. Our Economic Sentiment Indexshowed its second consecutive week of improvement, matching the high watermark over the past year +. Optimism for the overall U.S. economy continued its four-month ascension, as did confidence in making major purchases. But we haven’t seen (well, yeah we have, we’re just not sharing it yet) the effects of the China trade kerfuffle. That may (will) shake things up.

And as that confidence in major purchases bears out, Lowe’s could be in the catbird seat.Next Wednesday, Lowe’s will be announcing its Q1 earnings and Wall St. (and CivicScience) is expecting good things. Overall favorability toward the brand – particularly among critical groups like homeowners, Millennials, and those with a positive view of the economy – is healthier than nearly any brand we track, in any sector. Regardless of what we see in the Q1 earnings, we’re bullish on Lowe’s heading into the summer.

As many as 1 in 4 HBO Now subscribers could drop the service now that Game of Thrones is over, yikes. Read more if you’re hooked on that show. Sadly, I missed the zeitgeist on this one. 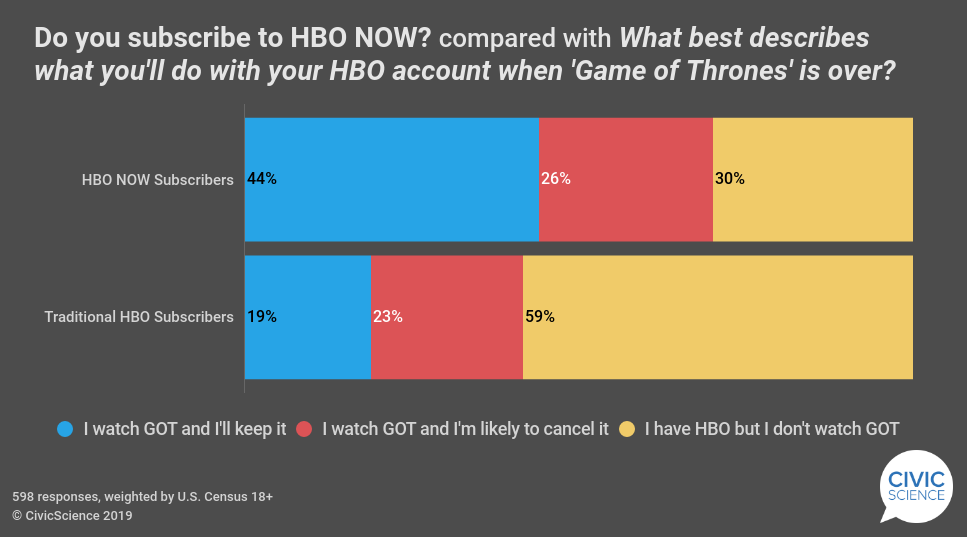 And here, my good friends, are the most popular questions of the week that had nothing to do with sex. Or pets.

If you are new to this list check out our Top Ten to get caught up.