Can CVS Breathe a Bit Easier with Tobacco Sales Cessation?

Last week, the U.S.’s second largest drugstore retailer CVS Caremark made a bold announcement that they will discontinue the sale of all tobacco products across their 7600+ CVS/pharmacy stores in the U.S. by October 1st of this year, stating that the sale of such products is “inconsistent with our purpose – helping people on their path to better health.” They even launched a web page called “CVS Quits” with information about the decision.

But what will this landmark decision cost them? The company estimates it will lose around $2 billion in revenue annually from the tobacco consumer, equating to approximately 17 cents per share. CVS went on to say in its press release that because the phase-out timeframe for this change will span most of 2014, the decision will not negatively affect 2014 segment operating profit guidance, 2014 EPS guidance (though the impact to 2014 earnings per share is expected to be in the range of 6 to 9 cents per share), or their recently announced five-year financial projections.

Earlier today, the company announced that its fourth-quarter earnings climbed more than 12% — but of course, those results precede CVS’s smoke out of tobacco sales. They also raised their earnings forecast for the start of 2014, and after this announcement, CVS’s shares were up approximately 2.7% at close on Tuesday, outpacing the broader market.

No doubt the company is looking to reassure investors and consumers that they are seeking to minimize the financial hit of having tobaccoless store shelves.

The true test will be how this is viewed by CVS (and Walgreen and Rite Aid) shoppers, and whether current attitudes and reaction to this news will predict changes in behavior. We took a look into this at CivicScience over the past few days, not to ask what people think of the decision, but whether this will affect their shopping patronage.

What we found is that overall, more people said that CVS’s decision would likely increase their shopping visits with the retailer (16%) than those who said they would shop there less (6%). Nearly half (47%) said it would have no effect.

The younger shopper demographic of 18 to 34 year-olds (Millennials) is even more pronounced, with 20% saying it would make them more likely to shop at CVS vs. only 4% saying less likely.

Those are perhaps reassuring insights for CVS about consumer sentiment, though the data certainly can’t at this point quantify increased sales that result from positive PR and how much that might offset lost tobacco sales.

Another data point that jumped out at us was that Men said more than Women that they were “Much less likely” to shop at CVS following the company’s decision: 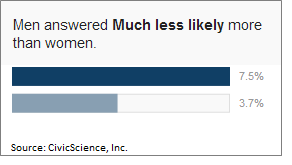 Is this because men favor the “one stop shopping” experience more – or are just more reluctant to kick the bad habit? This is something we may dig in to further at CivicScience. It’s certainly not because they smoke more than women (even the American Lung Association’s most recent available data, which is from 2008, points to a narrowing gap between the genders), as we look at smoker demographics from the past year:

Such insights only scratch the surface. We will be watching CVS with much interest this year to see if the early insights we can uncover are a predictor of future financial performance.