The Legacy of Lance Armstrong

A lot has been made of the recent report from the US Anti-Doping Agency and its damning conclusions about Lance Armstrong. In the days since that report was made public, the mainstream media and social media alike have become a battleground of debate about Armstrong. Some believe that Armstrong’s indiscretions forever tarnished his legacy of chairty work. Others believe that his public works, particularly in the areas of cancer awareness and research, dwarf the fact that he broke the rules of his sport.

In the past 24 hours, we asked 1,627 Americans where they fall on the big Armstrong debate. The results were weighted where necessary to ensure that the respondent sample accurately represents the full US population over age 13. Here’s how they came out:

When added up, a full 45% of Americans believe that Armstrong legacy of charity work should remain in tact despite his doping activity, while 31% believe his legacy is now overshadowed. While there are certainly a number of people in each camp, the largest group falls in the most pro-Armstrong category.

We took a close look at the cross-tabs too and, quite unusually, very little stood out. Among all demographic groups, the numbers were really consistent…except one.  Look at this: 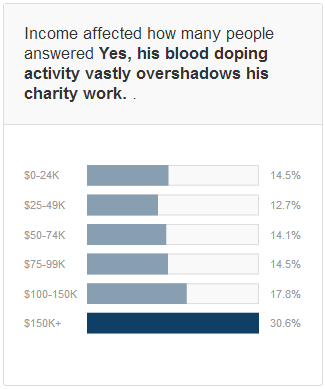 As you can see, the household income of the respondents correlated heavily with their opinion on Armstrong. The wealthiest respondents are more than twice as likely to come down harshest on Armstrong than respondents in other income categories. Why? We don’t know yet. But we’d love to hear your theories if you have them.

Overall, it looks like the majority of people still hold Armstrong and his legacy in high regard. The good news for Armstrong and his fans is that he still has a long career ahead of him to further build on, or repair, that legacy.