The Most (and Least) Popular CEOs in America Today

Ask yourself how many Fortune 500 CEOs you can name. Then ask some of your friends. I’ll bet that most of the corporate leaders you can think of are at the helm of a big technology company on the West Coast. Yes, Mark Zuckerberg, Tim Cook, and Larry Page are the Mellons, Rockefellers, and Carnegies of our day.

Sure, maybe you can think of others. Howard Schultz at Starbucks comes to mind but who else? Can you name the CEO of Walmart? What about Toyota? McDonald’s maybe? Pepsi? If you’re an industry baron or Wall St. trader, you could probably rattle off more names. But, for most of us, the list usually begins and ends with the most visible CEOs of Seattle and the Silicon Valley.

Last fall, we began tracking awareness and popularity of the biggest tech CEOs in America: Jeff Bezos of Amazon, Tim Armstrong of AOL, Tim Cook of Apple, Larry Page of Google, Mark Zuckerberg of Facebook, Steve Ballmer of Microsoft, Dick Costolo of Twitter, and Marissa Mayer of Yahoo. We survey approximately 2,500 US adults every month and track the results on a daily basis. Here is our standard question format:

Our goals with this research are three-fold:  First, to see which of these 8 CEOs is most visible or, in other words, prominent enough that people had formulated an opinion about her or him. Second, to rank the CEOs based on who is viewed most and least positively. Finally, to track results over time to measure the impact of, say, a bad PR hit or a great new product release.

The Most Prominent CEOs

To start, let’s look at the full cast of characters and rank them based on their prominence. We did this simply by tallying the percentage of respondents over the past 9 months whose answers indicated an awareness of a particular CEO and ranking them in descending order. Here’s how they lined up below (the % is the proportion of respondents who had either a positive or negative opinion about that CEO). 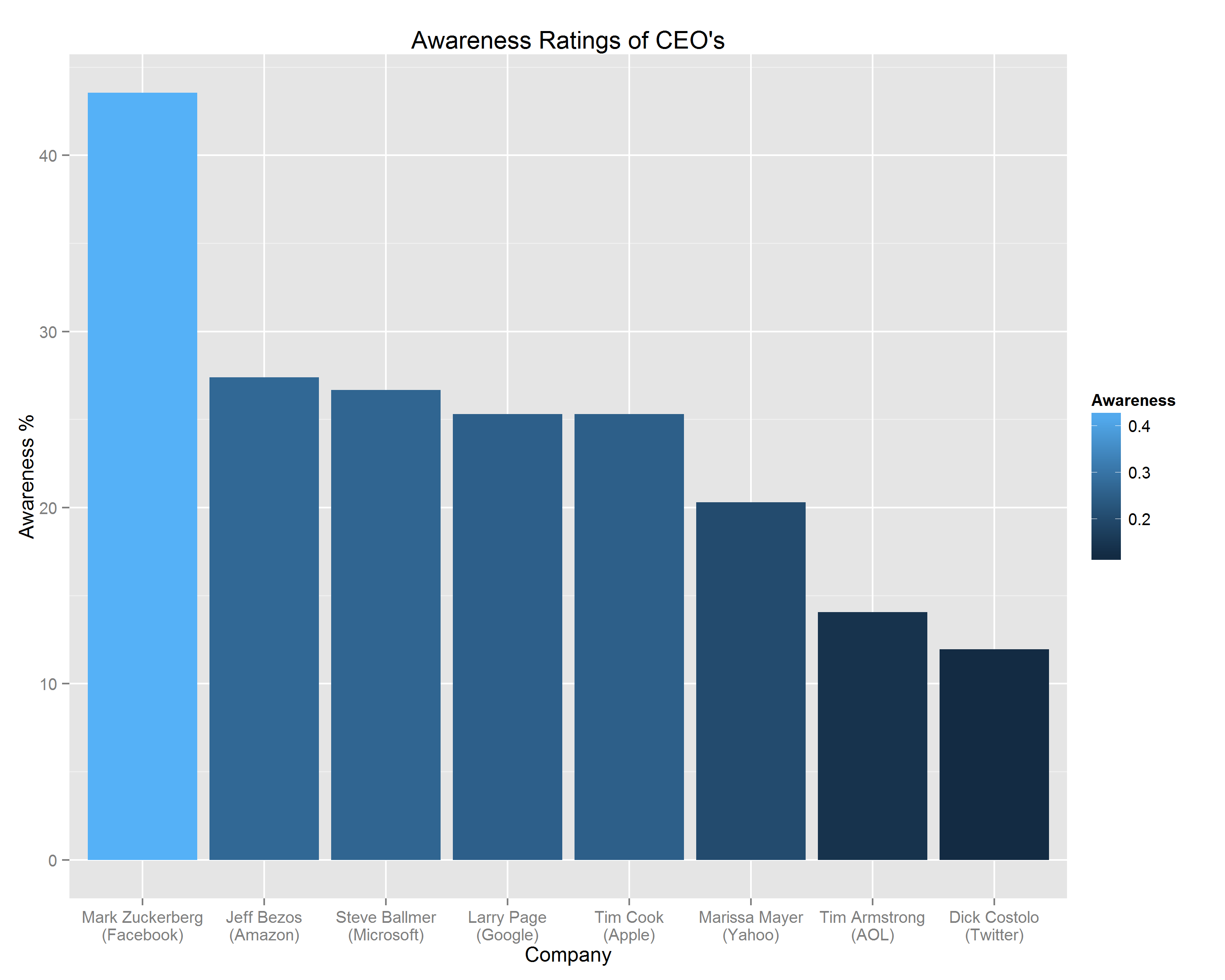 As we can see, no CEO is close to the notoriety of Mark Zuckerberg, perhaps simply because Facebook is so ubiquitous, or because he was so visible in the months leading up to and after Facebook’s IPO, or maybe because people feel like they know him (or at least Jesse Eisenberg’s portrayal) from the film, “The Social Network.”  A full 44% of US adults have formed an opinion of the Facebook leader. Only a few points separate a group in the middle from Bezos to Cook, while Dick Costolo of Twitter and Tim Armstrong of AOL round out the list.

The Most Beloved CEOs 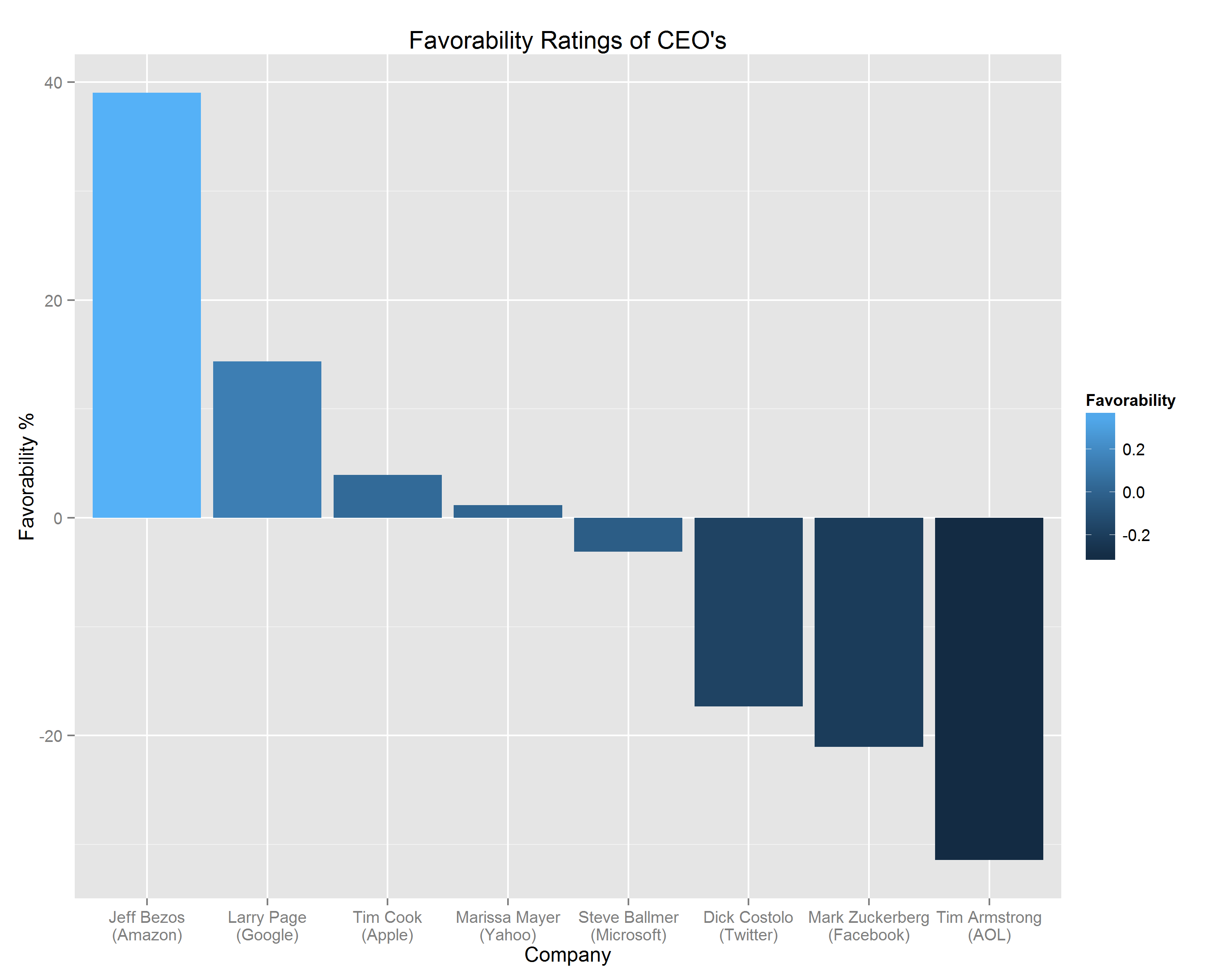 As you can see, Jeff Bezos of Amazon leads by a virtual mile, more than doubling the positive index score of the next closest CEO, Larry Page. Page and Tim Cook had strong positive numbers but lost ground to Bezos because larger “Very Negative” numbers dragged them down. Marissa Mayer stays in positive numbers but only slightly so, due to a shortage of “Very Positive” respondents. Steve Ballmer falls marginally under the break-even line due to a polarized but evenly-split populace.

Costolo, Zuckerberg, and Armstrong pull up the rear for slightly different reasons. Armstrong had the highest “Very Negative” respondents. Costolo had low positive numbers across the board but less severe negatives. Zuckerberg suffered from the fewest “Very Positive” respondents on the list.

Jeff Bezos’ steady leadership and strong company growth land him at the top of the list of America’s most popular CEOs. Though overall awareness of the Amazon chief is dwarfed by that of Mark Zuckerberg, perhaps staying out of the news gives consumers less fodder for criticism. Zuckerberg, meanwhile, is by far the most prominent CEO in the land. Unfortunately for him, it appears that a lot of the exposure he garners hasn’t led to many “Likes.” The good news for people like Marissa Mayer, Dick Costolo, and Tim Armstrong is that they are largely unknown compared to the others, giving them a lot of room to grow.

We look forward to following these numbers in the months ahead. Stay tuned.