After Tiger Woods’ victory at Bay Hill this past weekend, we wondered how consumers felt about Tiger’s reemergence following his troubles two years ago. Did he poison his image permanently? Do people still admire his greatness and want to see it in full bloom again? Or do pragmatists simply root for him because they know it makes the PGA all the more interesting to watch?

So we ran a pretty simple question immediately following his win this past Sunday. The results were fairly straight-forward as you can see below (N=1,832). When weighted to represent the US population, it appears that a majority of golf followers are NOT rooting for Tiger. One-third of those who DO root for him, primarily do so because it makes the sport more interesting.

We were surprised though by the cross-tabs we looked at by Gender. We would have thought more women would fall into the “I used to root for Tiger but not anymore” camp, given his marital indiscretions. But that does not appear to be the case. 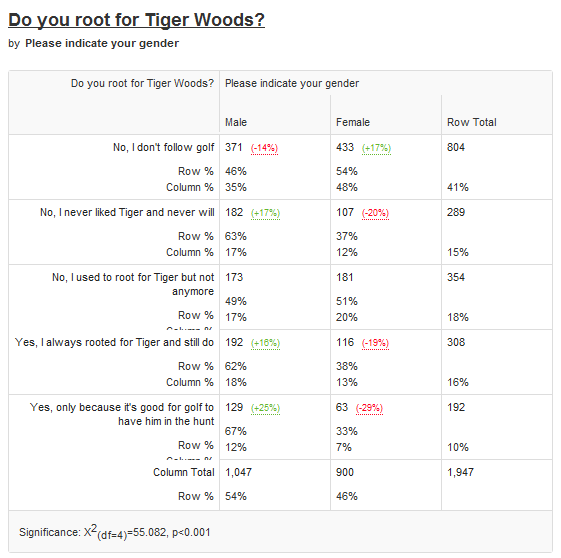 Anyway, we thought these would be fun numbers to share. We’ll keep an eye on them as golf’s Major season comes around.