That’s my number one management (and self-management) motto.

OK, maybe it’s not number one. There’s a giant sign on the wall in my office that says, “Work Hard and Be Nice to People.” That’s number one. And two. In reverse order, probably.

But number three is “Don’t do things you suck at.”

I wish it didn’t end in a preposition but “Don’t do things at which you suck” sounds stupid. We preach it alongside its more attractive sister: “Do what you’re gifted at doing.”

You’d think those would be easy rules. But, no.

It’s super hard to admit what we suck at. Self-awareness isn’t for the faint of heart.

It’s even harder to forfeit things to people who are more gifted at them than we are. Acknowledging your inferiority at something is not a sign of weakness. Au contraire.

Weaving it into company culture is hard too. It requires brutal honesty, often-uncomfortable communication, and organizational commitment from top to bottom. Focusing people on the things they’re most gifted at doing takes vigilance.

And you have to lead by example.

It’s the reason I don’t interview job candidates or participate in product design meetings. I suck royally at those things. And because of the ‘CE’ in my title, people put undue stock in my opinions (or pretend to), even when those opinions suck.

It’s also why people only send me Excel spreadsheets in read-only mode. And why Tara won’t let me wash the delicates or pay bills. I suck at those things – and many others.

Our team knows if they ask me a question and my answer is “I trust you,” it’s code for “I suck at that.” It’s liberating once you get used to it.

Because doing things you suck at doesn’t just lead to a shitty work product and frustrated colleagues. Things you suck at often take you twice as long – or more – veering precious time and energy away from the things you’re actually gifted at doing.

If you want to do things you suck at in your personal life, that’s cool, I guess. Maybe you’re a terrible singer but you can’t say no to a karaoke mic. Maybe you love to cook but you’re the only one who can stomach your food. Fine. Be you.

Target is pretty much trouncing Victoria’s Secret in the intimate apparel category. Whether the implosion of the Victoria’s Secret fashion show was causal or simply correlated with these numbers, it’s hard to tell. We wrote about Target’s ascension in the intimate apparel space over a year ago and things have kept accelerating in their favor. Last year, women chose Target over VS by just over 2 to 1. This year it has jumped to a full 3 to 1. I’m no expert on lingerie. But I know an ass-kicking when I see one. 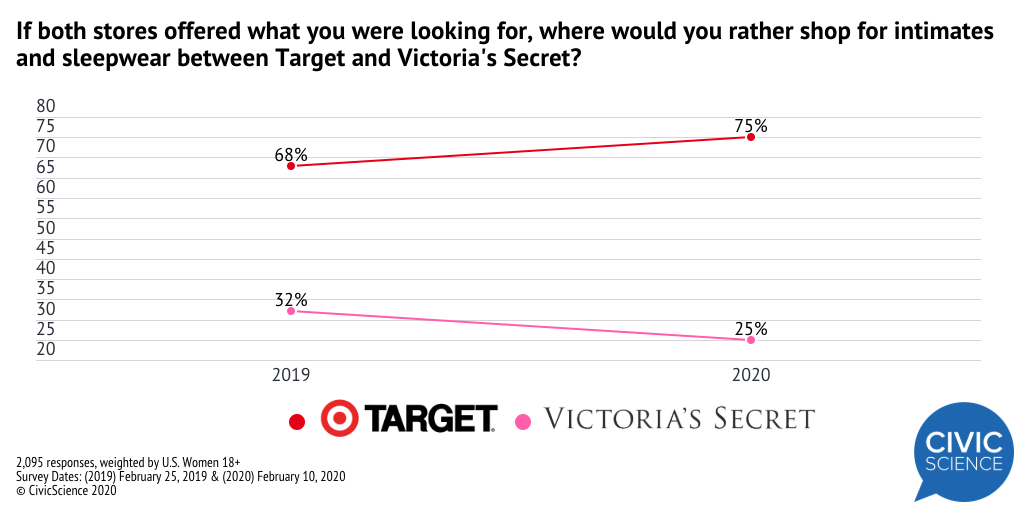 Interest in foldable phones is increasing and it’s anyone’s game to win. Shout-out to one of our writers, Jeff, for the Kenny Rogers reference that flew way over the heads of the Millennials in the office. Perhaps buoyed by Samsung’s big advertising push during the Super Bowl, consumer enthusiasm for foldable smartphones has climbed 45% over this time last year. Everyone from Gen X and younger seem to be in play. And perhaps what’s most notable is that iPhone owners are showing nearly as much curiosity as their Samsung-owning friends. Game on.

The Iowa Caucus debacle shook Americans’ faith in the national election process. Our good partners at Microsoft News used our data and wrote all about it. No sense in me stealing their thunder. See for yourself.

People didn’t hate the first weekend of the XFL. Maybe a ton of people didn’t watch (I didn’t) but the ones who did kind of dug it. Interestingly, college football fans responded better than NFL fans. Millennial men liked it the most.

Online and in-store shopping are in a fascinating state of equilibrium right now. The percentage of Americans who say they do the majority of their shopping in-store fell below 50% for the first time ever this month. That seems pretty terrible for brick-and-mortar stores. The silver lining is that the rate of migration away from stores is slowing, only a 2% decline from Q1 of 2019. Shipping costs and the inconveniences of returns seem to be the last dam to break – particularly among lower-income shoppers. But it will break, just maybe slowly.

More young women celebrated Galentine’s Day than watched the Oscars. Pause and think about that for a minute. Galentine’s Day. That’s a thing, seriously, where women celebrate February 14th with friends and not a romantic partner. About 6% of U.S. adult women said they were celebrating Galentine’s Day. But that number jumps to 14% among Gen Z and 11% among Millennials (only 7% of women in either age group watched the Oscars). And if you’re curious about the profile of the Galentine’s Day gal, she drinks wine. And loves spa treatments. And dining out. So, basically, she’s looking for any reason to celebrate anything.

People who like to sleep with their room temperature over 71 degrees are healthier and better rested, also probably psychopaths. This study came out of a debate we had at our board meeting last month because that’s the important kind of stuff you talk about when you get a bunch of gazillionaires together. One of our directors said they prefer 62 degrees, which pretty much stopped the presses. So, we went ahead and studied it and you can dig into all the findings here. The most notable thing is that younger people like it warmer. And men and women weren’t as far apart as I would have guessed. The right answer is 67. Conversation over.

These were our most popular poll questions this week:

Answer Key: No, no, no, neither, drinking.