My parents used to throw two Christmas parties at our house every year. Both on the same weekend. One Friday night. One Saturday.

The Friday party was just my dad’s work friends – from Pittsburgh National Bank, now PNC. Saturday was for childhood friends, extended family, neighbors, and the like.

You’d think one group would be more raucous than the other, but it was hard to tell them apart, at least based on the wreckage my sister and I had to clean up.

Bankers know how to party, it turns out.

But that might be where the similarities ended. My dad grew up rural. His buddies were hunters and truck drivers and tradesmen and Copenhagen-without-a-spitter kind-of-guys. They called each other by their CB radio handles. My dad (a.k.a. “Mary Poppins,” a story for another Saturday) was the only suit among them.

The bankers were, well, bankers.

I asked my dad one time – mostly so I wouldn’t have to spend my entire weekend cleaning the house – why he had two parties, instead of just one big blowout. Both groups seemed like nice people. Different, but nice.

But my dad was obsessed with making people feel comfortable, at ease. He was the kind of guy who spotted the nametag of a waitress or grocery clerk from several feet away, so he could call them by their first name like he knew them forever.

Putting two separate and distinct groups in the same house didn’t compute. Sure, some of the people from either side would meld just fine. But what about the ones who didn’t?

So, he kept them apart. It was manufactured tribalism, long before anyone knew what the hell that word meant. People with dissimilar backgrounds, educations, income strata, tastes in music, even tastes in booze – divided into groups, so everyone felt comfortable, so nobody would encounter a person or conversation that made them uneasy.

And now we’re all doing it. Avoiding MAGA hats or avoiding Hollywood award speeches. Avoiding anything that doesn’t make us feel better or affirmed.

Want to hear the funniest part of the story? Five years after he died, I still keep in touch with a lot of my dad’s friends from both parties – the retired old bankers and the retired old rednecks.

And every last one of them is a Trump supporter. They would get along famously.

As you could have probably predicted, consumer confidence took a nosedive in our latest reading. Whether it was the news of the coronavirus claiming its first U.S. victims, the doomsday scenarios painted by many in the media, or the resulting kick in the crotch it all gave to the stock market, consumers are freaking out. We’re seeing it affect spending and intent across a number of retail and brand categories already. Keep your arms and legs inside the car until the ride comes to a complete stop. 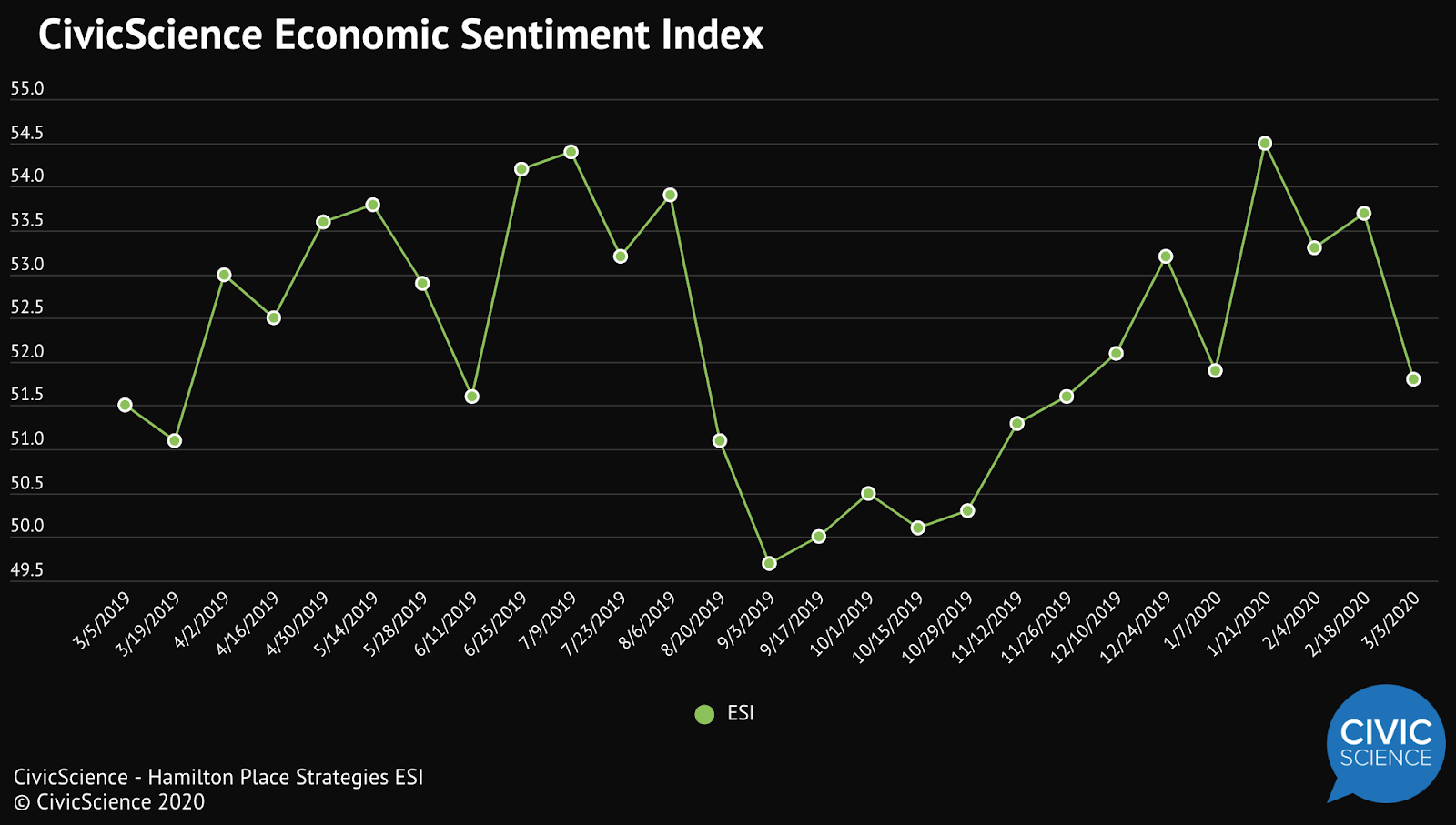 And if you want proof of the correlation, here you go. Every macro-economic indicator we track is sliding among people who are most concerned about the risk of the coronavirus becoming an epidemic in the U.S.

One thing benefitting from the coronavirus preoccupation – perception-wise – is tariffs. Since we all have bigger and more potentially deadly things to worry about, concern over tariff costs have leveled off. Among one group – wine drinkers – tariff concerns have actually fallen appreciably. Maybe it’s because wine costs are dropping thanks to a surplus of California grapes. Or maybe it’s because everyone is drinking their cares away. I choose option B.

Presuming anyone can actually travel in the coming months, Airbnb and VRBO could see a positive trend, especially among the young and wealthy. If you’re worried about the coronavirus but not so worried that you’re going to cancel a vacation or other travel, it would seem Airbnb could be the “healthier” option than a crowded hotel. Seventeen percent of Americans were already planning to use an Airbnb or similar service for their summer vacation this year and the number jumps to 25% among Gen Z. But those numbers don’t yet take potential travel disruption into account.

Gen Z is fickle, impatient, and vindictive when it comes to retail. I’ll start by saying I kind of admire all of that. We did a study about customer service in retail, preferred methods (phone, live chat, etc.) and a lot more, so check it out. My favorite part was all the stuff about Gen Z. First, they can’t be bothered with customer service at all. And if they ever have to return an item they bought at your store, they’re two times more likely than Millennials or Gen X to never buy from your store again. Ruthless.

Comcast has a big hill to climb in the streaming wars, even if they buy Vudu from Walmart. If you don’t follow this space very closely, Walmart has a TV and movie video service called Vudu that about 9% of Americans have used. Comcast is trying to acquire Vudu to help bolster the launch of the NBC streaming service, Peacock, coming this summer. The problem is that purchase intent for Peacock is super-low right now, as consumers are beginning to show signs of subscription fatigue. It’s going to get harder and harder to break through.

Panera is launching a new unlimited-coffee subscription service and it’s most likely to steal caffeine addicts from Starbucks and Peet’s, and nobody from Dunkin’. I swear. 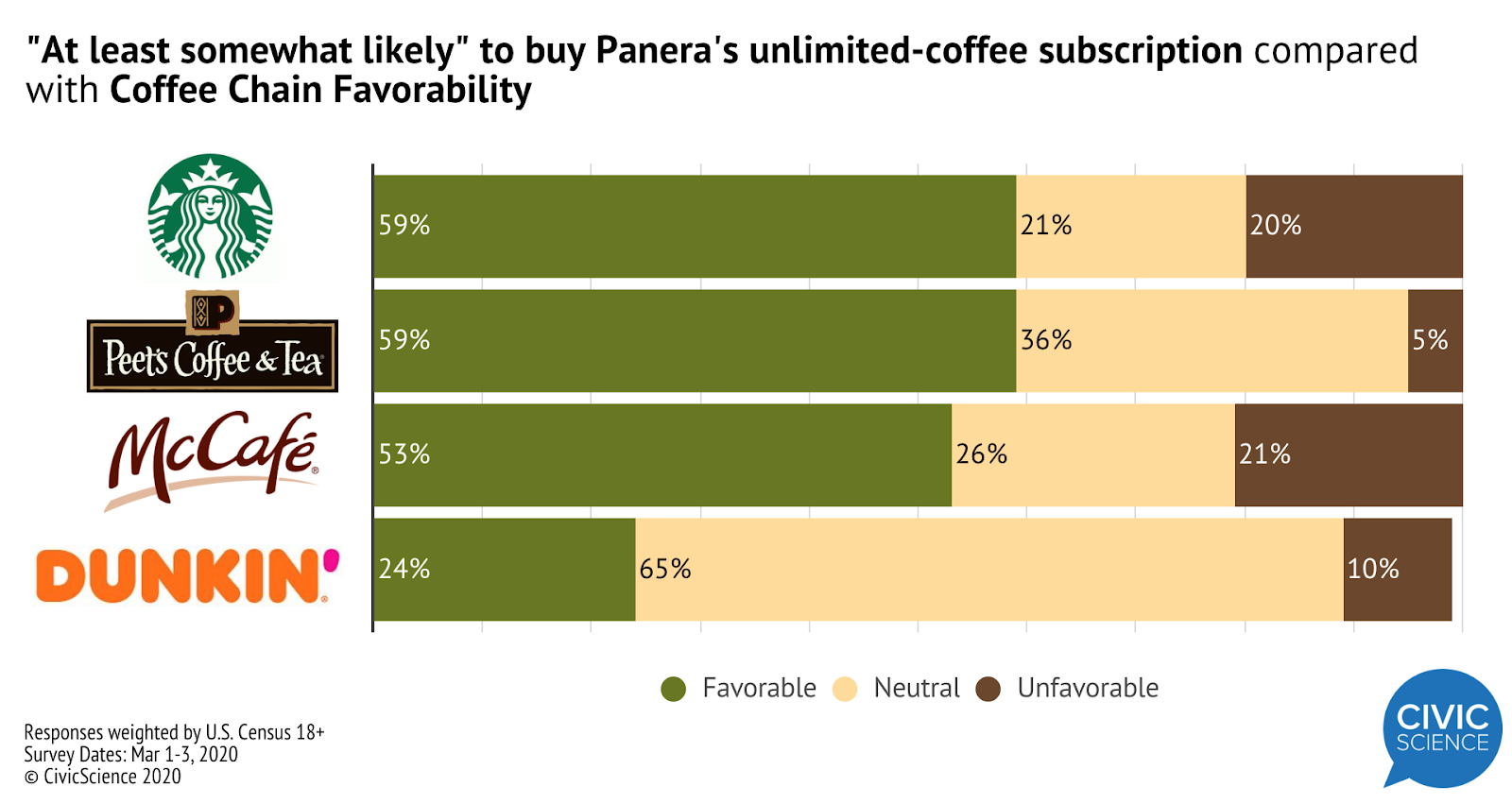 We also published studies this week about: The new Walmart+ offering that’s taking dead aim at Amazon Prime, the market potential of a lower-priced iPhone rumored to be hitting stores in the spring, and the latest release of our Streaming Platform Ranker, which still shows high rates of intent for Disney+.