Tara and I got married in the morning.

It was outside at the Don CeSar, the hideously-beautiful pink resort on St. Pete Beach. Guests grabbed mimosas and Bloody Marys as they arrived. My dad was Best Man. I still keep his handwritten toast next to my bed.

The ceremony only lasted about 20 minutes. We had a quick lunch reception, then everyone partied on the beach all day. That night, we rented out a rooftop bar with a semi-famous techno DJ spinning records.

The rave scene was a big part of my college experience. In the mid-90s, Orlando was the epicenter of House and Breakbeat music – and the underground dance culture. Only the U.K. was bigger.

Arriving via turnip truck from Appalachia, I’d never seen or heard anything like it. I swapped out my Dead tie-dyes and Birkenstocks for Adidas everything. Artists you’ve likely never heard of like the Chemical Brothers and Sasha & Digweed filled my CD shuffler. Mixtapes from DJ Icey played on loop.

Unless someone fired up turntables. Vinyl always ruled. I eventually learned how to handle a pair of Technics 1200s, cross-fading in and out of songs, even scratching respectably. Our crew would take turns for hours on end.

But it was all just to bide time between Saturday nights – well, Sunday mornings. The clubs didn’t even open until 2 am.

For six hours, it was sensory overload. Pulsating music so loud you couldn’t hear yourself talk. Dance floors packed like cigarettes, hotter and sweatier than a sauna. The worst environment imaginable during something like COVID. The greatest environment ever, otherwise.

By the time you emerged into the blazing Central Florida sunshine, you were stumbling past church-goers. Yikes.

Yes, there were drugs. Lots. I saw lives get wrecked by them. That’s why it all eventually ended. People without self-control always ruin it for everyone else.

Still, if you told 44-year-old me I could recreate one of those nights, even risking my health in the middle of a global pandemic, I would do it. When I was 20, I wouldn’t have thought twice about it.

Which is why relying on the discretion and self-restraint of college kids to contain COVID this fall seems like a questionable strategy – asinine, really. Asking them to withstand that kind of temptation and peer pressure is cruel and unfair.

They have the rest of their lives to carry all of this weight on their shoulders.

It’s ours to carry now. We need a better plan.

I’m pretty sure a bunch of people are going to unfriend me on Facebook if they haven’t already. I’ve been taking my social media provocations to a new level lately – don’t worry, it’s all being done for material I promise to share with all of you. Every day, I throw chum in the water, monitor, and prod the frenzy. I’m an asshole for sure. And you can tell people are tiring of it. Sixty-one percent of social media users have blocked or unfriended someone on social media because of their political posts. Emily on our team found tons of interesting insights into who and why – which you should read. But the most profound and predictive one is below.

In related news, most people love memes – unless they’re political memes. Conservatives like political memes the most, by a lot. Find out more than you’d ever want to know about memes here. Raise your hand if you ever had to look up how to pronounce “meme.” Guilty. 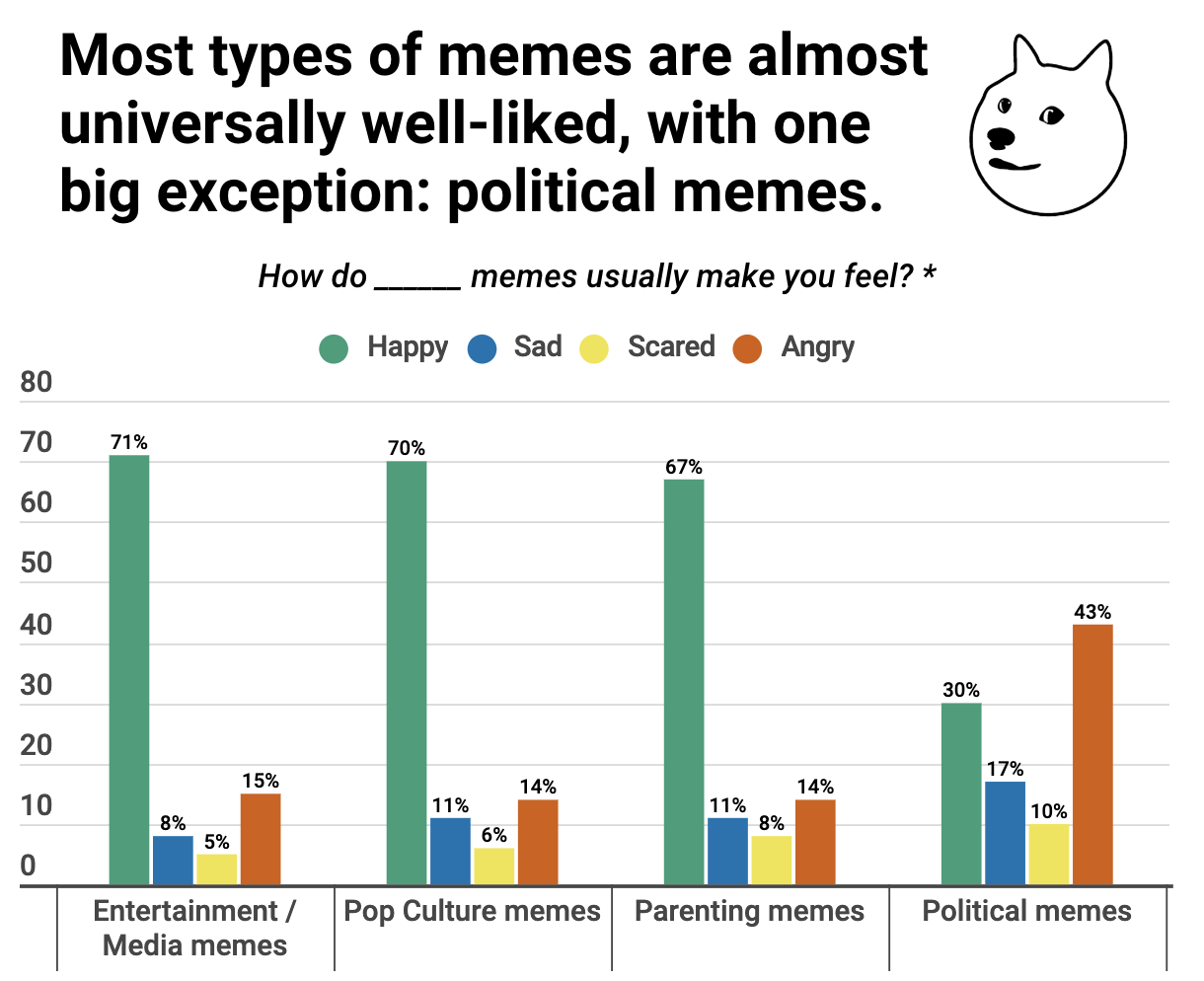 Some good news, I hope, almost half of Americans feel comfortable eating in restaurants right now. Generally, people – especially wealthier people – are feeling safer across most categories of in-person retail. Dining has seen the most promising improvements, with the percentage of Americans who are comfortable eating at a restaurant hitting its highest mark we’ve seen since the pandemic started. One-third of people still think it will be 6 months or more until they venture back into an eating establishment, but that’s down from 40% just a month ago. Let’s just be smart. 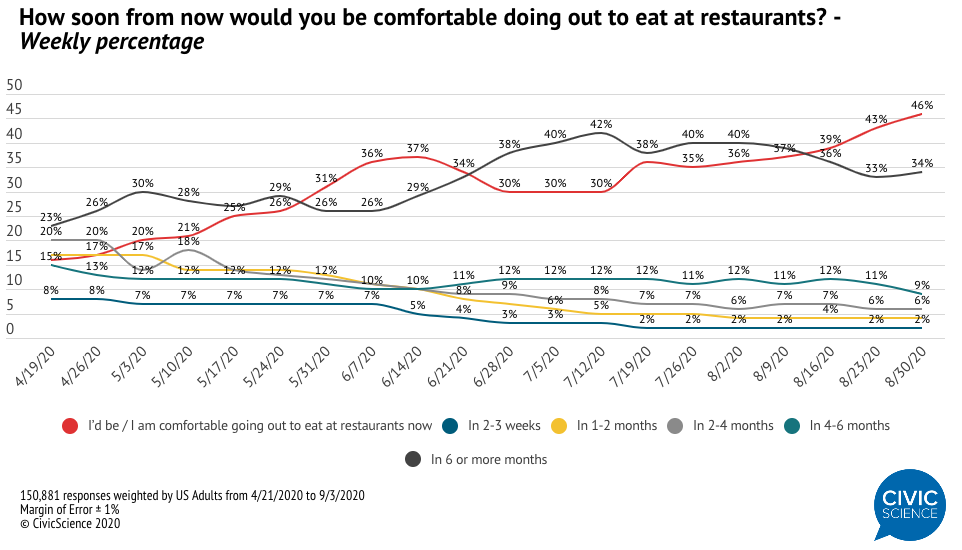 The picture isn’t quite as pretty for gyms. Here’s the good news for the fitness industry: People are exercising way more since the pandemic started, even if things tapered slightly in the late summer. The impetus to be outside, maybe some extra free time on our hands, and – for some folks – extra disposable income for gear has created quality conditions for Americans to get active. The flipside of that coin, however, is that it sucks for gyms. The number of weekly worker-outers is down 25% since February. Meanwhile, people of means have outfitted their own gyms, so they’re less likely to ever go back.

As Walmart’s answer to Amazon Prime prepares to launch next week, consumer interest remains flat. If the good folks in Bentonville have been doing anything to promote Walmart+ leading up to its unveiling, I mustn’t be in the target audience, because I haven’t seen it. And maybe others haven’t either. When we compared our July “intent” numbers to our September numbers, they haven’t really moved – even among Walmart’s most loyal shoppers. It definitely doesn’t look like they followed the Disney+ playbook, that’s for sure.

Quick Hit: People have become less interested in electric cars since the pandemic started. Price and charging fears are mostly to blame. See for yourself.

Intent to fly fell pretty fast leading up to Labor Day. I’m not sure this is a COVID phenomenon, however. Vacation season is over. The biggest issue for the airlines is that business travel – which typically replaces vacation travel in the fall – will be a shell of itself.

The dynamics of substance abuse during the COVID crisis are fascinating. We published a thought-provoking study this week on drug and alcohol abuse since the pandemic started. In general, the numbers are mixed, with 21% of Americans saying they’ve seen more use/abuse from people around them. Nineteen percent have seen less. One notable insight is that people under 25 have seen a big drop in drug or alcohol use among their peer group, likely because most of them moved home with their parents – until we sent them back to school.

Here are the most popular questions this week:

People love questions about food and sleep, it turns out.