One of you magnificent people sent me underwear this week.

I’d share a picture, but I’ve been told I can’t do that again.

This weekend marks exactly six years since I first wrote this email. Over those 312 weeks (including the 20 or so I skipped), I’ve received quite a hodgepodge of generous gifts, ranging from Dot’s pretzels, to “Michigan Dad” merch, to the funniest coffee mug ever, to Pro V1 golf balls (i.e. gold), books, cards, and more. The greatest gifts of them all were the over $25,000 in donations you made to support suicide prevention.

I’m forever humbled – and that’s extremely hard to do.

We all need a smile, because the coming week is going to be rough, no matter which side of the aisle you’re on. If the Democrats lose one or both chambers of Congress, half the country will be depressed. If Republicans fail to gain both chambers, or do so by a small margin, half the country will be left to wonder “what if,” had someone not forced so many unelectable GOP candidates through the primaries.

Incidentally, since World War II, the opposition party has gained an average of 26 House seats and 4 Senate seats during a President’s first midterm. That’s the over-under.

If this campaign season hasn’t convinced you once and for all that we need to reform the redistricting and primary process in the country, you obviously don’t watch any ad-supported TV. For most Americans, our elections have devolved into a game of “Your Candidate Sucks Worse Than My Candidate, Who Also Sucks.” All we can hope is the extreme suckiness of the other candidate is enough motivation for everyone to vote.

Just remember, this week is only one week.

Color me naïve, but I don’t subscribe to either the “world is burning” or “country is being destroyed” narrative. Times have certainly been better, but they’ve also been worse. We’ve always had economic uncertainty and division and radicals and hate – we’ve just never had social media to flash it in our face 24/7.

We have so much to be grateful for – like new underwear.

Consumer financial health is only slightly worse than it was this time last year. That’s the glass-half-full take. We normally don’t publish our Consumer Financial Health Index, because it’s arguably the most coveted data we sell to our clients, but I’m in the gift-giving mood. While our Economic Sentiment Index is a reliable predictor of other market-moving macro indicators, the CFHI is our strongest corollary to real consumer spending by category and by brand. As you can see in the chart below, the CFHI has been sliding over the past month, though still way above its low point in June. And, despite all the economic doomsaying right now, it’s only less than three points below the same week in 2021. We see differences across brands, with Chick-fil-A customers reporting worsened financial health, compared to Panera, and Lululemon customers worse than Nike. To see how your customers stand, start by clicking here.

We’ve done our best to wreck Gen Z, but fortunately they’re smart about self-care. We published the first in a series of studies about the changing face of young adults over the past five years (encompassing a big 2+ year disruption right in the middle). The approach is to compare 18- to 24-year-olds today to 18- to 24-year-olds (now 25-30) five years ago – and the findings are fascinating, if depressing. We first looked at the overall happiness of Gen Z, which plummeted over the past five years, along with their sense of physical and mental health. As a result, the rate of exercise and retail splurging is climbing dramatically. Good for them. Way more to come on this series.

One week after being backed into egregiously overpaying for Twitter, Elon Musk’s popularity reached a new low. Meanwhile, just 26% of Twitter users say they’re even somewhat likely to spend $8 for account verification on the platform. Good luck with that. 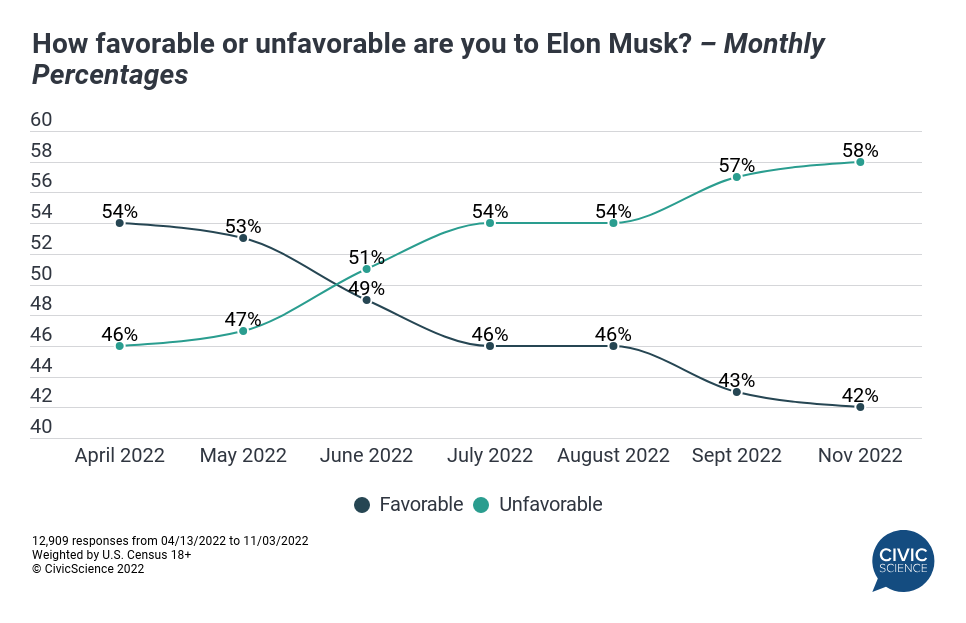 Support for permanent daylight saving time continues to grow and I’m here for it. The only thing more predictable than the annual turning of the clocks is the inevitable argument Tara and I have about it. She hates dark mornings, I’d rather have the extra light (and golf) at the end of the day. Support for my side of the debate climbed four percentage points from this time last year because people are smart. Notably, younger people are far more likely to support changing the clocks. They’ll learn.

People are slightly more confident in political polls they see in the news than they were three years ago, and they shouldn’t be because they suck. I’ve beaten this horse to death, but it’s worth sharing our latest numbers, nonetheless. The number of Americans who say they are “very confident” in election polls has increased from 4% to a whopping 7% since we first started tracking it in 2019. More importantly, 11% of people now say they have actively lied to a pollster to skew the results, up from 2019. Twenty-seven percent say they actively avoid answering political polls, up – a lot – from 18% three years ago. When you do a little math on those numbers, you realize that the percentage of people who lie – among those who actually respond – is much higher. Yet another reason we don’t do it.

Online wine-buying is on the rise heading into the holidays. Holiday wine-buyers say they plan to spend (a little) less this year than they did last year, for reasons I don’t need to explain at this point. Notably, wine-gifters are much more likely to be bigger fans of reds. Also of note is that the percentage of drinking-age adults who buy wine on the internet continues to grow at a steady 2% / year clip. If only we could do this in Pennsylvania without a bunch of semi-legal work-arounds I’ve only ever heard about, I swear.

Tons more free data swag from the CivicScientists this week:

Answer Key: It’s all been downhill since Meg Ryan’s heyday; Tara certainly thinks so; Terrible; No comment; It’s among my greatest joys.