Some weeks it’s really hard to write this email without ranting about politics.

I don’t write about politics, because data is useless in today’s politics. It’s more about the source – and the tribe that source aligns with – than any numbers or facts. If I don’t like your numbers, they’re fake. And if a media outlet keeps showing me numbers I don’t like, I’ll find another one that does. Advertisers will follow me until their dollar lands with the outlet that tells me exactly what I want to hear. That’s how the machine works.

Look. All of you know what’s causing these horrific mass shootings.

And narcissism. And video games. And parenting. And political rhetoric. And Nike. And gender. And race. And age. And single-use plastics. And…

If I’ve drilled any message into your head over these many Saturdays, it’s that everything affects everything. It’s why CivicScience exists. It’s why I write about infidelity and Impossible Burgers in the same breath. It’s why the biggest companies in the world, who have more data at their disposal than God, still pay us exorbitantly to fill in the blanks.

The problem with our current socio-political shitshow is that it’s impossible to tell how many things are to blame and to what proportion. We can’t write a survey question – hell, we can’t write a million questions – to tease it all apart.

I feel like I have a pretty good way with words, if I do say so myself. I wish I could spin some phrase to soothe or inspire or unify everyone. I wish I had more answers.

I’m just not that good.

But at least I have a million Dick jokes.

Consumer confidence improved ever-so-slightly in our latest reading, but it’s probably already old news. I know we always mock the other economic indices for their glacial monthly reporting but even our two-week release cycle is pretty obtuse. That’s why we track economic sentiment on a daily basis (but don’t give it away for free). Things move so fast. But at least before it started sliding on Monday, we saw ten days of positive gains, driven mostly by enthusiasm for the housing market, which saw its highest peak since September of 2016. Until the next unforeseeable thing happens, I bet the next reading will be a downward one. 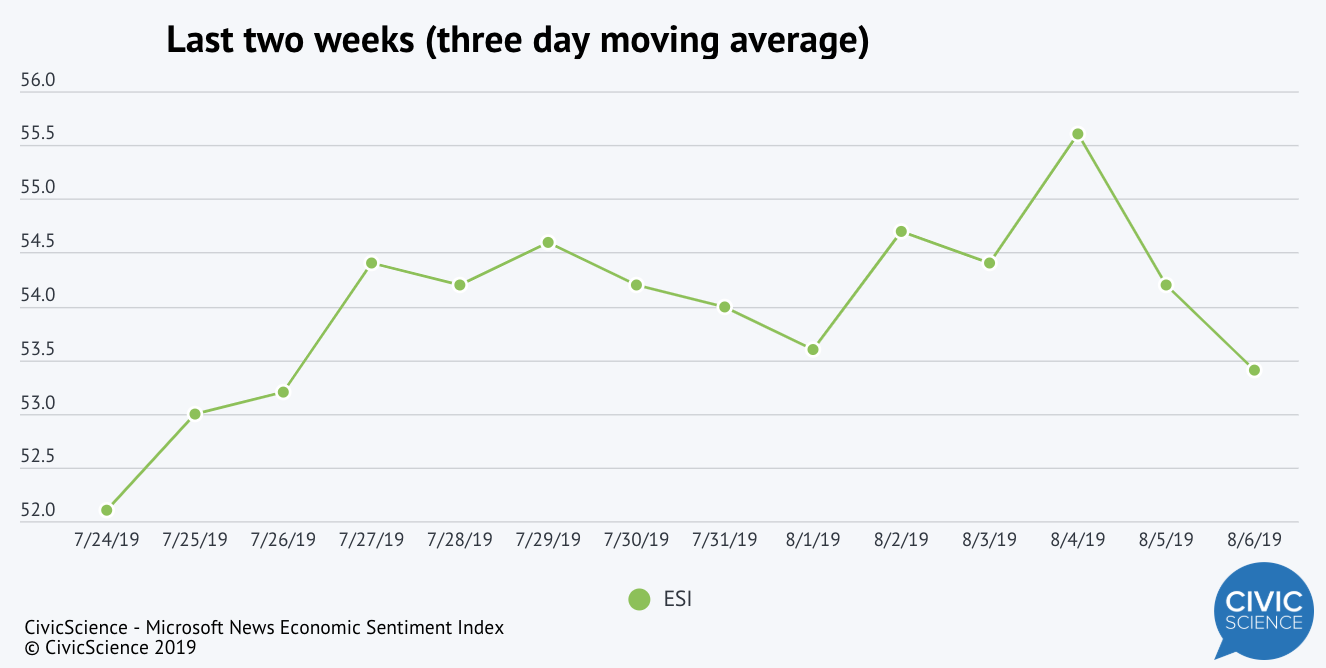 Back-to-school shopping looks like it will be flat this year, which actually wouldn’t be all that bad. Considering that consumer confidence was booming last summer (also, tax refunds), you might expect to see a notable decline in BTS spending this year but that doesn’t appear to be the case. Only 29% of adults say they are planning to spend less this year, compared to 31% who said that in 2018. It is interesting, however, that we see little or no expected growth in online shopping, except for among Amazon Prime members. Back-to-school is still one of the few experiential shopping events.

ESPN should take a page out of my book and not talk about politics. Well, to their credit, they already decided that a couple years ago, despite the occasional rogue radio host. But we ran some recent analysis on ESPN’s “no politics” policy and found overwhelming support across demographic and party lines. Sure, Democrats were more likely to disagree with the policy but still, 71% were for it. The one thing everyone seems to agree on is that politics sucks.

Hard seltzers are hitting the mainstream and they could make a dent in beer sales. I would put my household up against anyone when it comes to guzzling carbonated water. We have as many as three cases chilling at any time. So, I’m not surprised to see a movement around alcoholic knockoffs of La Croix. Eighteen percent of Americans over age 21 have already tried them and the number is much higher among drinkers. It jumps to 25% among Millennials. When we looked at various types of drinkers – wine, spirits, and beer – the beer drinkers have tried hard seltzers (or intend to) more commonly by a mile.

Women are bigger spenders on mobile gaming because of course my daughter is. It’s no secret that males drive the majority of money in the video game industry. But the picture is a bit different when we look just at mobile games. Whether it’s buying new apps or buying in-game goodies, women are far more likely than men to spend higher dollars. These numbers jump through the roof when we look at Gen Z kids like mine – 49% of whom spend money on mobile games every month. My girls have me wrapped around their little gaming fingers.

Oh, and if you want more evidence that Gen Z and Gen X are look-alikes, take a look at our data about the 90210 reboot. It’s here and it’s awesome.