Our fancy new PR firm took me on a tour of the fourth estate this week, getting me acquainted with some journalists we’ve never worked with before. More on that later.

First, I did another Cheddar gig from the NYSE – which has become little more than a live-action backdrop for TV. They did ring a bell once, but I’m not sure what else everyone was doing there.

Snap(chat) was announcing earnings that evening and my fellow talking heads and I pontificated on how messy the bloodbath would be. We’ve been on the hook for weeks, foretelling of Spiegel-and-Co’s first quarterly user loss – even when bigger names said otherwise. But by Wednesday, nobody was reading happy tea leaves.

I spent the whole day in a state of guilty conflict: Rooting for a company to fail so we didn’t get egg all over our face, while knowing that in the startup world, karma is a bitch. You should never wish ill on entrepreneurs, big or small. There’s enough success out there for all of us.

But the prediction business is a perverse one. If it bleeds, it leads. Nobody cares when we rave about Amazon or Netflix. They only want to know who will suffer as a result. Why do you think local TV news is full of house fires and car wrecks? People are rubberneckers.

In the end, the best scenario played out for us – at least from a business + karma standpoint. Snap reported its first DAU loss, pretty much on the number we expected. But revenues out-performed, so the stock impact was humane, at least initially. I’m not optimistic long-term but at least I can go back to wishing them well for now.

As for the reporters we met, they were all so thoughtful and professional. The “Fake News” hyperbole has convinced laypeople that there are armies of journalists all over the place, making shit up to advance some political agenda. Just like the 90% of scientists fabricating data about climate change for some reason. Ridiculous.

The journalists I know care – no, obsess – about the truth. Even when they’re skeptical about our methodology and data, which admittedly gets on my nerves, I know it comes from a genuine desire to be accurate. Most of them aren’t paid enough to be beholden to a hidden agenda. Or paid enough at all, really.

A seemingly-unprecedented thing happened to our consumer confidence numbers…nothing. Even with a few daily jolts, our Economic Sentiment Index barely budged over the past two weeks – or basically the whole last month. We would have to go back to pre-Trump days to find this kind of consistency. But it also feels like a bit of a statistical mirage, with gains in one area of the economy off-setting declines in another. Still, after a long run of bi-weekly whiplash, a few weeks of boredom may not be a bad thing.

Investor sentiment, on the other hand, is dragging. In short, it seems that investors are more concerned than the average consumer about the impact of trade policies and tariffs, even in the face of solid economic fundamentals and a strong Q2 earnings season. If you geek out about this stuff – read what our partners at PNC Bank have to say – it’s over my head.

Consumers might forgive companies who raise prices over tariff implications. Coca-Cola this week was one of the first companies to blame a pending price increase on recent tariffs. We ran a study to see how consumers would react, asking two questions to different but identically-constructed groups. We asked one group if they would buy less Coke products when they increase prices. We asked the other group if they would buy less when they increase prices “due to recent aluminum tariffs.” In short, consumers were half as likely to say they would buy less Coke products when the tariff qualifier was included. It helps that a) Coke drinkers are less price sensitive than Pepsi drinkers AND b) they are also more likely to be Republican – implying that Rs are even willing to pay more for soft drinks if it validates their party’s economic policies.

The trendy smart speaker category seems to have hit a plateau. I wouldn’t call Amazon Echo or Google Home “bleeding” at the moment, but they do have a scratch. After months of steady growth, particularly through Holiday 2017, category ownership hit a ceiling – incidentally, the same <20% adoption ceiling that’s plaguing Snapchat right now. We did see a tiny bump in the weekly numbers following Amazon Prime Day but not enough to move the needle. One troubling factoid is that the percentage of people who say, “I own one but don’t use it that much” (8%) has surpassed the percentage who say they “plan to buy one” (7%). Something needs to turn that tide.

Most college grads would go back in time and change their major if they could. There’s way too much awesome stuff in this article for me to do it justice here. Just read it. Some of my favorite factoids: People who majored in health & medicine were the most likely to have been pushed into it by their parents. People with degrees in art & humanities were the least likely to find a job in their field. The largest percentage of people who don’t like their major chose it because they were undecided and had to pick something. Anyway, check it out.

Almost 1/3rd of married people would not marry their current spouse if they could do it all over again and yikes, Tara, I swear it was not my idea to pose that question. 29% of U.S. adults – 57% of whom are women – say they would like a do-over on the marriage front. Gen Xers are the most likely to want a redo, by the way. What’s the best way to tell if someone is in a regretted marriage? See if they go on dates with each other. People who say they still go on dates with their spouse are over 2X LESS likely to say they want a do-over. 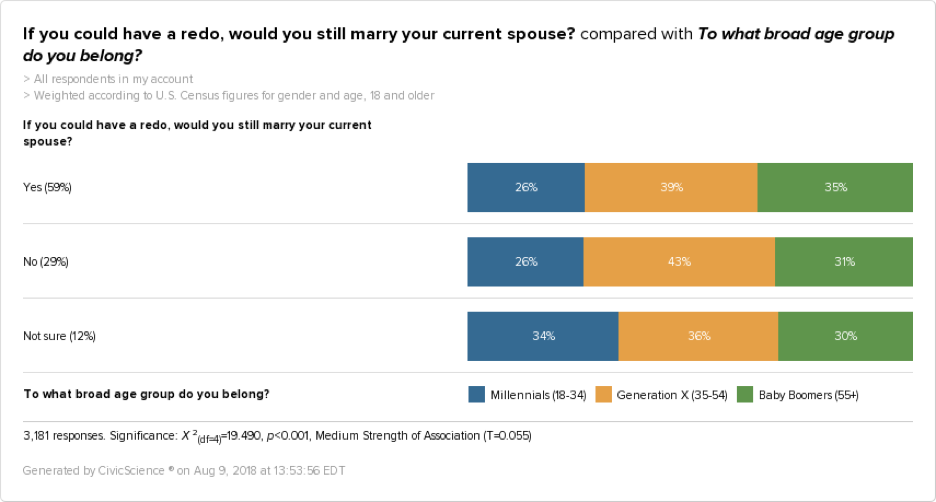 Random (Chicken) Stats of the Week

Give me hot or insane drums/legs with blue cheese, please.