Are We Fatter Than We Think We Are?

Much has been made of the recent study from the Trust for America’s Health regarding the rapid increase in obesity in the US, particularly the claim that over 44% of the US population will be obese by 2030. Frankly, it’s horrifying.

But do people really know they are that fat? Maybe some data on consumer self-awareness (or lack thereof) can shed some light on how to solve obesity problems. Or maybe it will just yield a bunch of silly observations that have no larger significance whatsoever. For now, we’re focused on the latter. Fortunately, we have a “robust” amount of data on US consumers and their weight perceptions.

Over the past year, we asked over 56,000 Americans a simple question, “Do you consider yourself to be overweight?” with a simple Yes/No response set. We then looked at thousands of other attributes about the respondents and pulled out some of the more fascinating and quirky cross-tabs. Results were “re-weighted,” where necessary, to reflect the US population over age 13.

Now, let’s be really clear. We are obviously dealing with a significant self-reporting bias when we ask people about their weight. Some people, who ARE overweight, might truly believe they’re not, while some people who are NOT overweight might actually believe they are. Just remember that this is a commentary on consumer self-image, not obesity.

It looks like a full 55% of US consumers consider themselves to be at least somewhat overweight. But, who are these people? Here we can look at the question based on the Age of respondents: 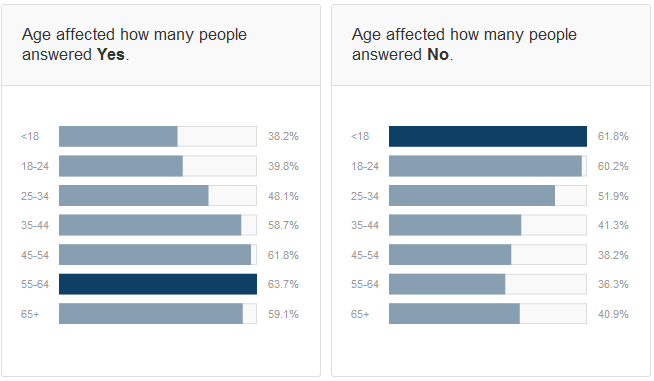 Clearly, the the question correlates very heavily with age, where those aged 35 and up (peaking at 55-64) say ‘Yes’, they are overweight, while younger consumers are most likely to say ‘No.’

The Gender gap is pretty clear too. 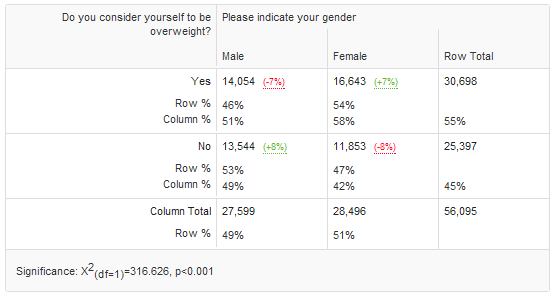 As can be seen in the chart above, women are significantly (at least statistically so) more likely to consider themselves to be overweight than men do. Classic male ego, right?

Here is one that we were surprised DIDN’T correlate: 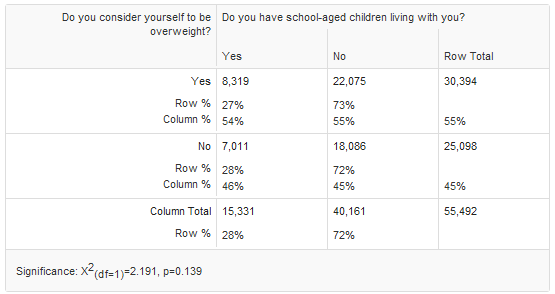 For those of us at CivicScience with kids, we know the health perils of little sleep, even less exercise, and an obligation to clean the leftover chicken nuggets and ranch off Jimmy’s Spiderman dinnerware (but I digress). But, alas, there doesn’t seem to be any widespread correlation at all.

How about this one? Stereo-type reinforced.

Are Democrats really more likely to be overweight or just more honest about it?

Maybe we should stop cooking and start cleaning or doing yardwork.

At least those of us who think we’re overweight aren’t weighed down by big wads of cash in our wallets.

Sir, please put down the Pepsi and walk away.

And last but not least…Zynga.