Don’t Give Up On Phone Pollsters Just Yet

The land-line phone polling industry has taken quite a beating in the press in recent weeks. This recent report from the Pew Foundation was particularly scathing. According to their research, the response rates to phone surveys has dwindled to less than 9% of homes called. Consider that according to earlier Pew data (and confirmed by ours) fewer than 70% of US households even HAVE landline telephones. That means (if you multiply 9% times 70%) that only 6.3% of people are contributing to phone-based opinion polls. That’s just plain crazy.

But what amazes us is, despite such an inherently flawed methodology, how these old-school pollsters are still able to produce accurate results from time to time. Consider a recent poll from the good folks at Quinnipiac regarding the Voter ID law in Pennsylvania. Using a small respondent sample of under 1,000 registered voters in PA, they concluded that over 66% of residents support the law, while over 91% of Republicans and 53% of Democrats support it. Their margin of error was 3%.

Then, look at our results to the same question. We polled 5,120 residents and 4,438 registered voters in Pennsylvania during a similar timeframe. Our overall results were virtually identical to the Quinnipiac findings (though with a margin of error of less than 1%). You can see in the chart below that a full 67% of Pennsylvanians support the Voter ID measure.

And then look at the registered voter numbers cross-tabulated with Party registration. According to our data, 92% of Republicans and 52% of Democrats support the Voter ID measure (compared to 91% and 53% respectively for Quinnipiac). 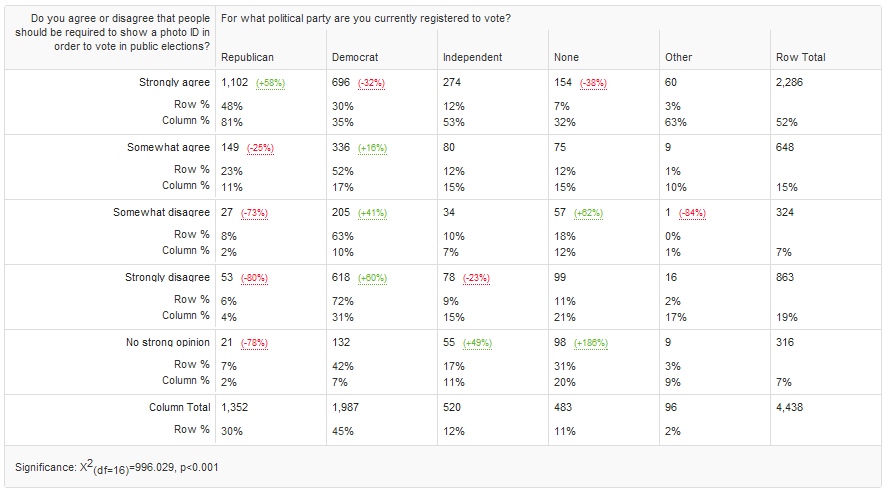 If our numbers are accurate (and we have no doubt whatsoever that they are), then you have to hand it to Quinnipiac for producing such strong numbers despite such a limited sample frame. Nice work.