A heart-breaking loss against Canada, followed by an embarrassing showing in the Bronze Medal game against Finland, sent the US Men’s hockey team home from the Sochi Olympics with a whimper. A podium shut-out for the U.S. speed-skating team and a late surge by the Russians to win the medal count (handily) all seemed to sour U.S. fans in the final days of the Games.

A CivicScience survey of 1,073 U.S. adults in the final 36 hours of the Winter Olympics showed a steep drop in satisfaction for the team’s performance. Here are these most recent results:

In fact, if you looked at the first wave of results we collected one week into the Sochi games, these final numbers look even better.

Owing perhaps to early high-profile losses by Shaun White, Bode Miller, Shani Davis, and others, among this first wave of 1,672 US Adults, 35% were pleased and 24% were disappointed. While the overall “disappointed” group was 24% in both readings, the “very disappointed” group grew from 8% to 10% in the final numbers. The “positive” group grew by 6 percentage points, attributed mostly to a larger group with “no strong opinion” in the first wave.

Most interesting, though, is the time trend we saw over the final week-plus of the Games. Take a look at the chart and time-graph below. 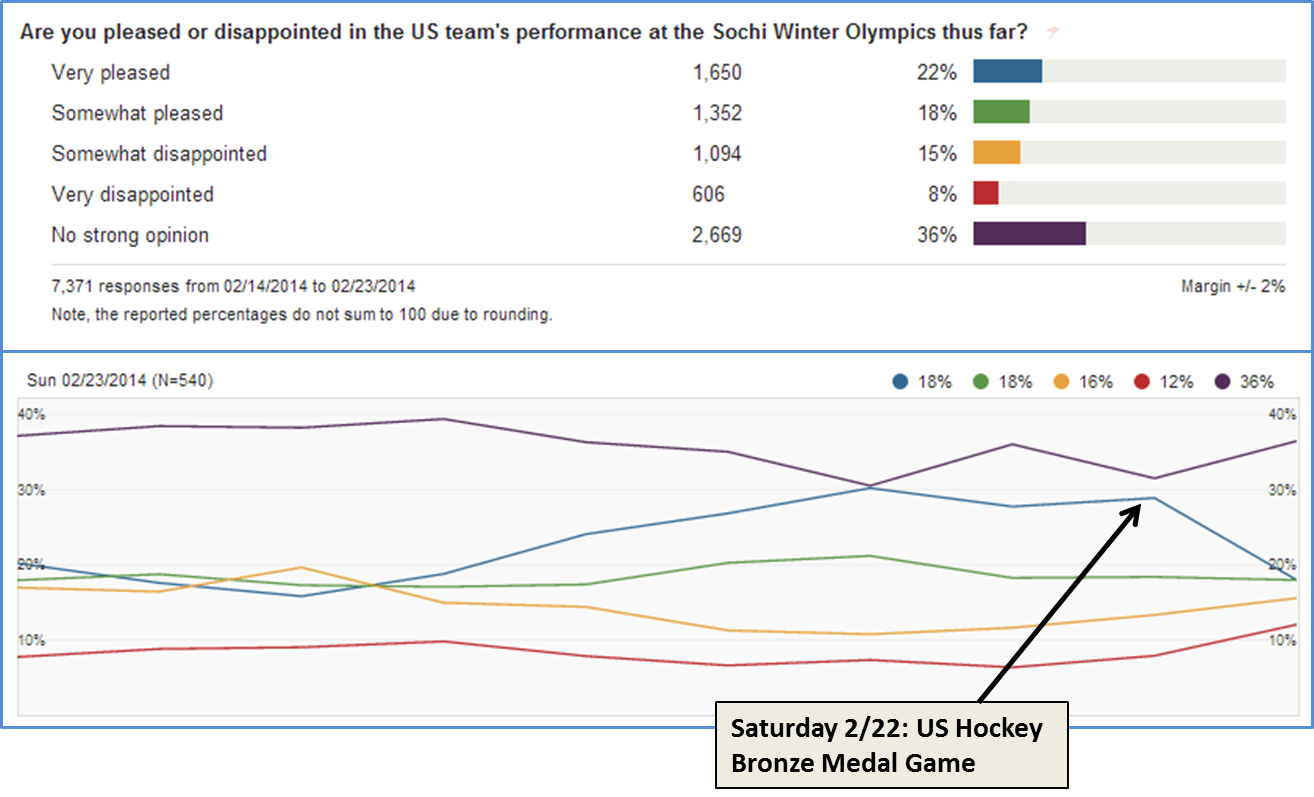 Here you can see both the aggregate results and the daily undulations from the 500-plus US adults we surveyed every day. The number of “very pleased” respondents (the blue line) peaked at 30% on February 20th, following a gold medal win by skier Ted Ligety, an impressive quarterfinals win by the men’s hockey team against the Czech Republic, and a silver medal by the women’s bobsled team. After a devastating loss to Canada by the women’s hockey team in the finals and a shut-out of the US women in figure skating, the numbers dipped slightly the following two days. Then we see a big dive.

After the semi-final loss to Canada on the 21st and the early-morning blowout to the Finns on the 22nd, the blue line looks more like a ski jump. The numbers bottomed out today among our final 540 respondents, with just 18% who are “very pleased.” The red line, meanwhile, those who said they were “very disappointed,” followed a different arc. After remaining fairly steady at around 6-9% throughout the Games, the red line crept above 10% for the first time today, settling at 12% among our final wave of respondents.

Overall, more U.S. fans will end the Sochi Olympics pleased with their nation’s performance. Still, that pleasure is not as high as we saw it just a few days ago. It’s probably unfair to pin the country’s sentiment on one team or one sport. But, as representatives of the most popular professional “winter” sport in the U.S., there can be little doubt that the fortunes of the men’s hockey team had the most profound impact.