The Ever-Changing Profile of Undecided Voters

We’ve written before about undecided voters (“Undecideds”), focusing on who they are and what makes them tick. But one thing we did not discuss in our earlier post was whether or not the characteristics of Undecideds remain static over time. Do Undecideds in one month look like Undecideds in the next?

If we were running a presidential campaign (or a SuperPAC) and were spending of truckloads of money all in the hope of convincing people to vote for our candidate, presumably we’d want to know what issues are most important to Undecideds, and we’d probably also want to know if the issues that matter to Undecideds are shifting over time. In short, we’d want to see something like this:

(Note: All numbers were weighted by US Census figures for the 2008 voting population. These numbers are derived from samples of 2,361 Undecideds in July, 3,181 in August, and 5,507 in September. The increasing sample sizes are due to an increase in our overall respondent base, NOT an increase in the proportion of voters who say they are “undecided.”) 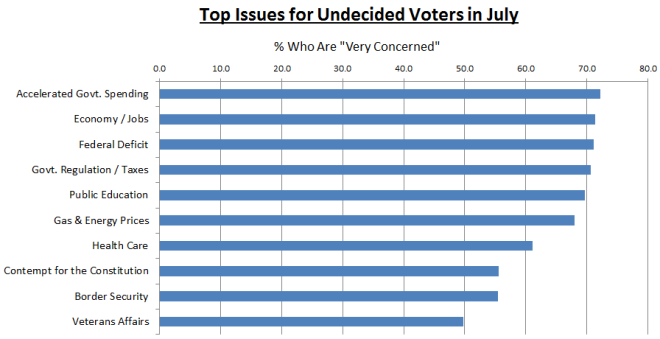 As this chart shows, the best way to win over Undecideds in July was to rail against (or justify) accelerated government spending, and explain what you would do to revive the US’s stagnant economy. But what about August? 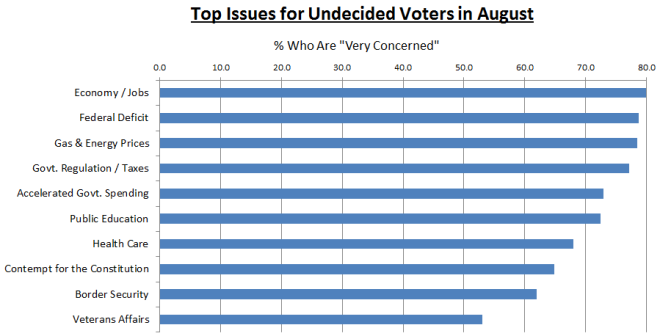 In August, the economy shot to the top of Undecideds’ priority list, and accelerated government spending fell all the way down to spot number five. Gas and energy prices leaped from sixth to third, perhaps as vacationing Undecideds came to grips with how much money they spent filling up their tank throughout the summer. But what stands out to us most of all is that the level of concern for all issues increased in August, perhaps indicating that Undecideds, who aren’t exactly news junkies, started paying closer attention to both campaigns’ major talking points in August.

Now let’s see how Undecideds feel about these issues as September draws to a close. 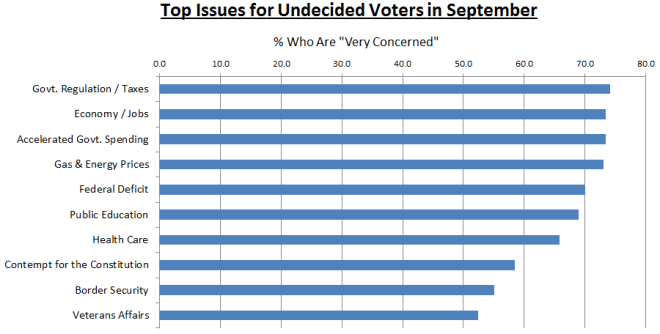 One thing that jumps out across all months is how health care is only ranked seventh each month. Clearly, the passage of Obamacare factors into the high level of concern about government spending and the deficit, but Undecideds seem to be less worried about the state of the US’s health care itself than the impact it has on the nation’s balance sheet.

These issues are sure to be covered thoroughly in the presidential debates, which start next week. With that in mind, over the last two weeks we asked over 2,500 Undecideds how much emphasis they’ll be placing on the debates. Of those who said they plan on voting, 41% said the debates will have a big impact on their decision. Wednesday’s debate, which covers domestic policy (i.e., the topics listed above), is a major opportunity for both candidates to lock down new voters.

Come back next week when we look into how the demographic and characteristic attributes of Undecideds have changed from month to month.