Verizon May Have Stopped Its Slide, Thanks to the iPhone 7

We’ve been tracking consumer trends in wireless carrier subscriptions on a weekly basis since 2011, with over 2.8 million people surveyed on the topic. During that entire period, Verizon Wireless has consistently and clearly remained King of the Hill, averaging about 35% market share during that period. The players below them shifted, with T-Mobile making noticeable gains, while AT&T and Sprint suffered minor slides.

Starting early this year, however, we began to notice a trend in our data. The number of our respondents who reported Verizon as their wireless carrier started tapering off in February, then dropping more precipitously from April through October. Indeed, a few months later, Verizon reported slowing subscriber numbers during their July earnings report, followed again by “plummeting” numbers in their Q3 report. 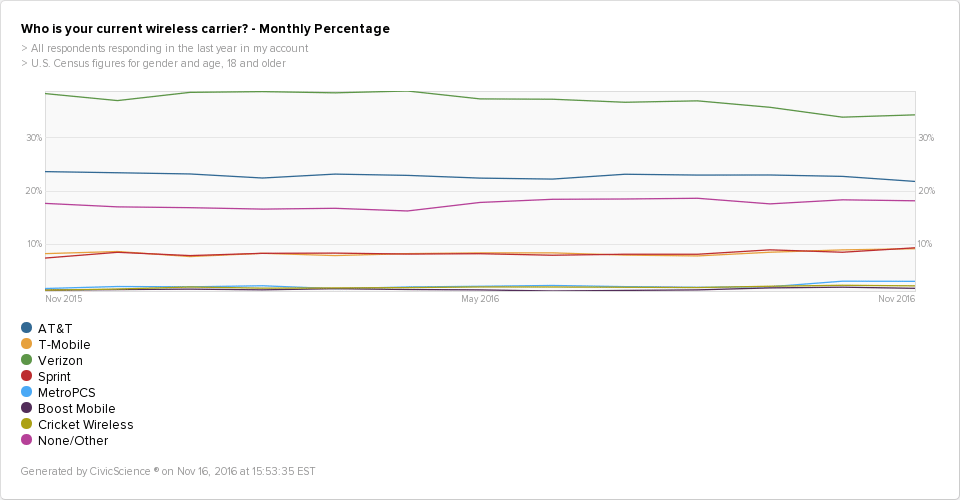 But then the bleeding seemed to stop in late September and October, with a slight rebound in the first half of November. What seems to be driving this trend is an increase in new iPhone 7 customers among Verizon’s subscriber base. Why do we think that? Here’s why:

It’s true that some of those percentage gains may be attributable to a decline in Samsung ownership among Verizon’s customer base, due to the much-publicized travails of the Note 7. But the Verizon’s free iPhone trade-in promotion certainly drove up sales in the early weeks of the products availability.

Time will tell if this was a permanent halt in Verizon’s sliding subscriber numbers or whether the iPhone 7 surge was just a short-term Band-Aid. With the holiday retail season upon us, the stakes are high.