The market research industry is pretty messed up.

It’s not just the archaic methods – I’ve railed plenty on the sit-at-home-and-answer-surveys-for-money guinea pigs that YouGov and others pass off as real people. A study we did recently found that more and more of those paid survey-takers belong to multiple panels and a majority of them don’t have a job. It’s a side-hustle. Of course it is.

The bigger problem is that the typical big-company research person looks at the world much differently than the C-level cat they work for. It’s not their fault. Corporate researchers often have to specialize in narrow areas, like the person at the apparel company who only studies accessories. There’s so much data to ingest today. Studying socks is a 50-hour-a-week job.

Everything – and everyone – is connected.

A couple years ago, we found that one of the biggest causes of volatility in the restaurant industry was the advent of the Affordable Care Act. Yep. Still is.

The array of stuff we write about may seem entirely random. But we’re not just doing it to sprinkle in something for everybody. You need to look at everything from a bird’s eye view.

I pay a lot of attention to who reads this thing every week – company and title. Sorry if that’s creepy. It tells me if I’m playing the right chords.

And there’s one thing I can set my watch to: If someone unsubscribes from this email, they’realmost always a specialist (or offended by Dick jokes). If we never write about socks, then the sock-researcher has little reason to stick around. Why should they care about ride-sharing apps or the housing market?

So, we see a significant and growing correlation between the job level of people on this list and the likelihood that they read and engage. Week in and week out.

Anyway, yeah, that was all just a long-winded way of telling you how smart you are.

People are multitasking while watching content at a rapidly-accelerating rate and the ramifications of that are pretty huge. Count me among the people who usually has a phone in my lap while I’m watching a movie or TV show, either gazing at email or checking the Penguins score or something. A study we published this week found that, for the first time, a majority of TV viewers admit to playing with a second device while watching shows. And the majority of that majority are looking at apps, games, or other content NOT related to the show they’re watching – and that % is climbing year after year. What does that mean to the impact of advertising? How do content creators do more to assimilate those experiences? Good question.

CVS may be showing other retailers how to win over the younger crowd. It didn’t take the newly-merged Aetna/CVS family long to bring a great idea to market. They’re piloting new CVS layout models that include in-store health clinics, testing labs, and even yoga classes – at the expense of selling fewer greeting cards and what-not. And, while chronic diseases and such bring a mostly older audience into a pharmacy, this looks like a brilliant long-term move too. Younger (U24) respondents in our research are by far the most interested in the concept. Millennials and Gen Z consumers want convenience and ‘on-demand’ if they have to leave the house. This plays right into that trend.

There’s a higher level of interest in college basketball this year as March Madness nears.Our tracking data shows a healthy jump among NCAA men’s basketball fans this year, the highest since we started monitoring it in 2015. Millennials are the most likely to follow the tournament “very closely” this year but Gen Xers are just as likely to participate in a bracket pool – because we’re degenerate gamblers. Twitter should be a hot-bed of March Madness banter since we found a huge correlation between the use of the platform and tournament viewing intent. 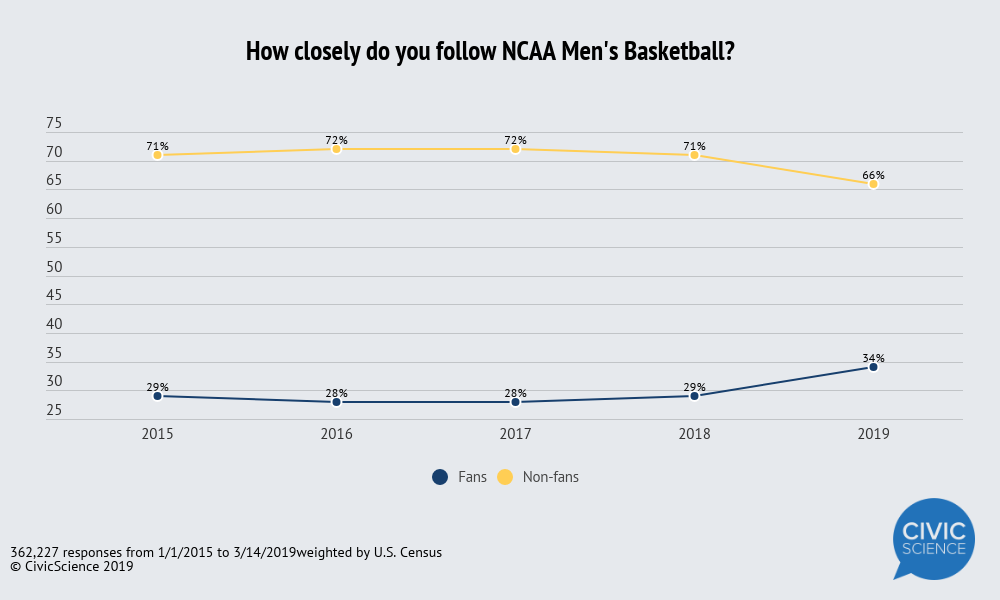 CBD just keeps moving up the charts. We’ve been tracking the emergence of CBD products in the U.S. – for the teetotalers out there, CBD or “Cannabidiol,” is basically a low-grade, legal weed derivative being baked (pun intended) into various consumer products. Awareness and adoption of CBD has been lifted remarkably in just the past 6 months. Usage has increased from 13% to 15% of Americans, while intent has increased from 11% to 14%. Relatively speaking, those are meaningful movements in just two calendar quarters. We’ll keep an eye on it.

Dick’s Sporting Goods may lose some customers over their decision to stop selling guns, but they’ll gain even more valuable ones. The day of Dick’s decision to pull firearms from their stores, we launched a question over our platform to gauge consumer reaction. As you’d expect, male Republicans from the South and Midwest are pissed and, surely, a lot of those dudes will shop elsewhere. But when we looked only at women who shop at Dick’s, we saw a different story. Female shoppers say they are now more likely – and nearly 1/3rd of them are “much more likely” – to shop at Dick’s. And the numbers are even higher among moms, many of whom are the primary purchasers for the sports-obsessed kids. Seems like an impressive move. Almost as impressive as me writing this entire paragraph without a single Dick’s pun.

And here are a few of our most engaging new questions this week: