I only remember getting in big trouble once as a kid. I was in 8th grade.

One day after school, I grabbed a pen knife off my dresser and, for some inexplicable reason, threw it at the pillow on my bed to see if it would stick.

But I missed the pillow. And, as a Midwestern kid in 1988, of course I had a waterbed. And the knife went through it – like a knife through a waterbed.

After futile attempts to stop the gushing (FYI, Scotch tape will definitely not cure a lacerated waterbed), I ran to my mom. She was pissed, but she came to my rescue, knowing that her anger was a pittance compared to the fury we expected when my dad got home.

Incidentally, it was the day of our middle school Open House. I had to go early that evening to be a hall monitor because I was a dork like that. A friend’s mom picked me up before my dad got home from work. Luckily, I’d miss the initial fury and – if all went well – maybe he would hear so many flattering things from my teachers, he’d forget all about the little waterbed snafu.

If that’s how this story turned out, I wouldn’t bother telling it.

Shortly after the parents started pouring into the school that night, I noticed a faint buzz as kids walked past me chuckling or outright howling. I had no idea what was happening until one of my friends said, “Dude, did you see your dad?”

Then, there he was. In a hideous patent leather jacket, more-hideous white leather shoes, a giant butterfly-collared shirt, red plaid pants, and slick-backed hair. It was like a bad disco movie met Randy Quaid from Christmas Vacation – only Christmas Vacation hadn’t been made yet.

That was my punishment. And, for a cocky, socially-obsessed teenager, it was worse than the Gulag.

No, I wasn’t scarred by it. I already had calluses on my ego from the Shithead hat my dad gave me a few years earlier. Not to mention the whole last-name thing.

But I did learn two priceless lessons that night. One, that my dad played a parenting game that was (and still is) way out of my league. And, two, if you’re dumb enough to throw a knife at a waterbed, you deserve everything you get.

Here’s what we’re seeing this week.

One of the bright spots in this national shit-show we’re living through is the broadening of support for LGBTQ+. June is Pride Month and I don’t know if the timing of the landmark SCOTUS ruling on Monday was a coincidence or not, but it was serendipitous at least. Americans are rallying behind the LGTBQ+ community on nearly every dimension we study. Over the past year, affinity for brands that support and promote Pride Month has increased nearly 50%. Notably, those numbers are relatively flat among LGBTQ+ respondents – meaning the gains are all coming from the non-LGBTQ+ population. Progress.

About that SCOTUS ruling, it was long past due. Since we first started tracking attitudes toward the U.S. job market, LGBTQ+ workers have shown consistently lower confidence and optimism than non-LGBTQ+. Another sign of systemic workforce inequities, LGBTQ+ workers were much more likely to lose their jobs due to the COVID crisis. If you didn’t believe LGBTQ+ needed greater employment protections, you weren’t paying attention. 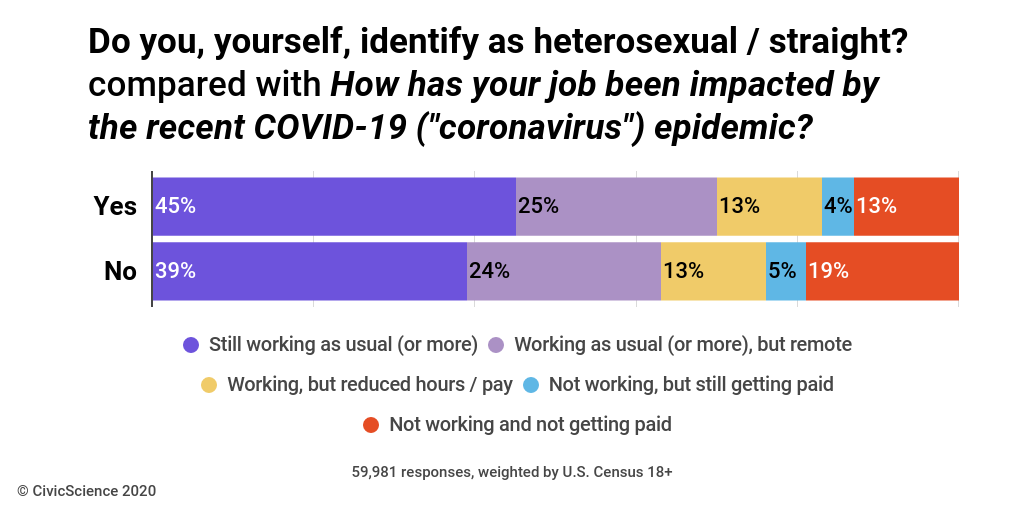 Willingness to get vaccinated for the coronavirus is declining and it’s complicated. Only 64% of Americans right now say they’re sure they will get a CV vaccine if/when one becomes available. That’s down from 70% just a month ago. If you think about it, the faster a vaccine is accelerated, the less it can be evaluated for medium or longer-term side effects, and the more potentially harmful it could be. If (hopefully) a vaccine is discovered quickly, expect this to be a heated debate, which is good, because we need more divisive issues for people to scream at each other about on social media.

Get ready for Cousin Eddie to show up at your house this summer.  Vacationing is taking a huge hit thanks to COVID, with 51% of Americans saying they don’t plan to take one, up from 28% in February. Among those who are sticking with their vacation plans, staying in hotels, Airbnbs, or real B&Bs is way out of vogue – at least relative to this time a year ago. A much greater percentage of Americans this summer are planning trips to stay with family or friends or, maybe, in an RV, tent, or cabin. However you choose to do it, I hope you’re in the 49% of vacationers this summer. You deserve it.

As telemedicine has exploded since the start of quarantine, the changing profile of users is fascinating. We did an extensive study on the lifestyle and psychographic profile of telemedicine users and you can read some highlights here and download the full report (if it asks you to sign up or something just email me and I’ll hook you up). But it paints a remarkable picture of an older but increasingly tech-savvy consumer – a trend that could eventually start impacting things like mobile banking, streaming, and online retail of all kinds. It seems telehealth has opened some likely-bespectacled eyes.

Americans’ stress levels look like an EKG, which is fitting, sort of. One of the best questions we track in our system to capture the mood of the American consumer is the one you see below. Self-reported stress is a strong proxy for lots of other things – health, financial well-being, safety fears, you name it. We saw record high levels of stress across the population the week of March 22nd with things slowly subsiding the first week of June. I’m not even going to waste the word-count telling you why. But here’s a great write up on these data, related stats on therapy, and more.

A few other studies we published this week:

Here are our most popular questions this week: