Yes, if the election was today, Trump would get slaughtered. I know, I know. “Everyone thought that in 2016!” This is different.

Why do you think he’s done 180s on COVID and masks all of a sudden? Don’t fall for Trump’s rants about fake polls. He watches them closely. And he should.

Because the election isn’t today. Eighteen weeks is a socio-political eternity.

Don’t be duped. Don’t let polls affect your fears or your enthusiasm. They’re meaningless at best, evil and misleading at worst.

One exception: If you’re a huge political donor and you only care about betting on the winner, analyze the polls until the cows come home. I envy your moral indifference.

Just realize you’re wagering on a football game two weeks before kickoff, when half the team is waiting on results of a COVID test. The variables between now and game-time are almost infinite.

It wasn’t until October last time that we felt confident enough to explain why Trump had a chance. It was a circumstance that had been brewing for almost five years. And it took an enormous amount of data and analysis to figure it out.

But we still wouldn’t have predicted he was going to win – or lose – the morning of that election. If anyone tells you they had Clinton winning the popular vote by 2 points, and Trump winning the Electoral College by just 80,000 votes across Michigan, Pennsylvania, and Wisconsin, they’re full of shit.

We have the largest and most sophisticated polling database in the history of mankind at our disposal and I still wouldn’t bet my credibility on a .25% margin of error. Not when the stakes are this high.

Anyway, it doesn’t matter what we think.

It only matters what you think. It matters that you vote. It matters that the outcome is as decisive as possible, one way or the other, so we can quickly heal and move on from whatever happens.

You can take every piece of data I share with you straight to the bank. Because if I’m wrong by a quarter-percent about how much people like pinot noir or Charmin, it won’t change your life. But a quarter-percent in November could alter the fate of the free world.

This election is too important. Stay focused.

This is what we’re seeing:

Consumer confidence blows right now. Our Economic Sentiment Index this week reached depths it hasn’t seen since April. All that stimulus, shrinking COVID cases, and economic reopening is a distant memory. Our collective outlook for the U.S. economy is suffering the most, as consumers grapple with uncertainty over back-to-school, back-to-work, back-to-sports, back-to-restaurants, back-to-anything. At what point do we start worrying about holiday retail? Maybe now.

Walmart got ahead of the holiday game by closing their stores on Thanksgiving and consumers love it. Walmart is ending a 40-year-old tradition of starting its Black Friday rush on Turkey Day. A mind-blowing 88% of Americans support the decision – only 3% oppose it. It might be the biggest spread in anything we’ve polled seriously since I started this company. For real. So why the hell isn’t everyone else doing it?

Maybe nobody cares if Walmart is open on Thanksgiving because they expect to be social distancing still anyway. A growing number of Americans – 49% at last count – believe it will be at least 6 months until we see an end to social distancing measures. Only 22% have eaten at a restaurant since the pandemic started and the numbers get worse when we ask people if they plan to eat out in the near future. Lots of other data in this study reinforces the same theme across categories. We’ve hit peak cliché – welcome to the new normal.

Weed is getting a lot of people (high) through the pandemic.Sixteen percent of U.S. adults say they’re using cannabis and potentially just as many are too paranoid to admit it in a random online poll that could be spying on them and ratting them out to the cops. (Mental note: Add “We’re not narcs” to our privacy policy.) Gen Z is the most likely to say they use weed at all, while Millennials and Xers are more likely to say they blaze every day. The numbers get super interesting when you look at gender and the splits between medical and recreational herb. Check it out. We won’t tell anyone.

Impossible Burgers and Beyond Meat are definitely benefitting from the COVID crisis. Rising meat prices have inspired Americans to consider other options, with the potential number of plant-based meat eaters poised to double. The concept is particularly promising in the fast-casual restaurant category, where we find a perfect alignment of free spenders, trend-forward diners, and app-based food delivery aficionados. Keep an eye on this.

If you want to be an expert on toilet paper by the time you’ve finished your morning coffee, you’ve definitely come to the right place. Obviously, the toilet paper industry smashed sales records so far this year. And Charmin is the most popular brand, by a mile, which is important because it’s a category where people value brand over price, by a mile. Strength matters most, followed by softness. Environmental impact scores way low. People don’t mess around when it comes to toilet paper. 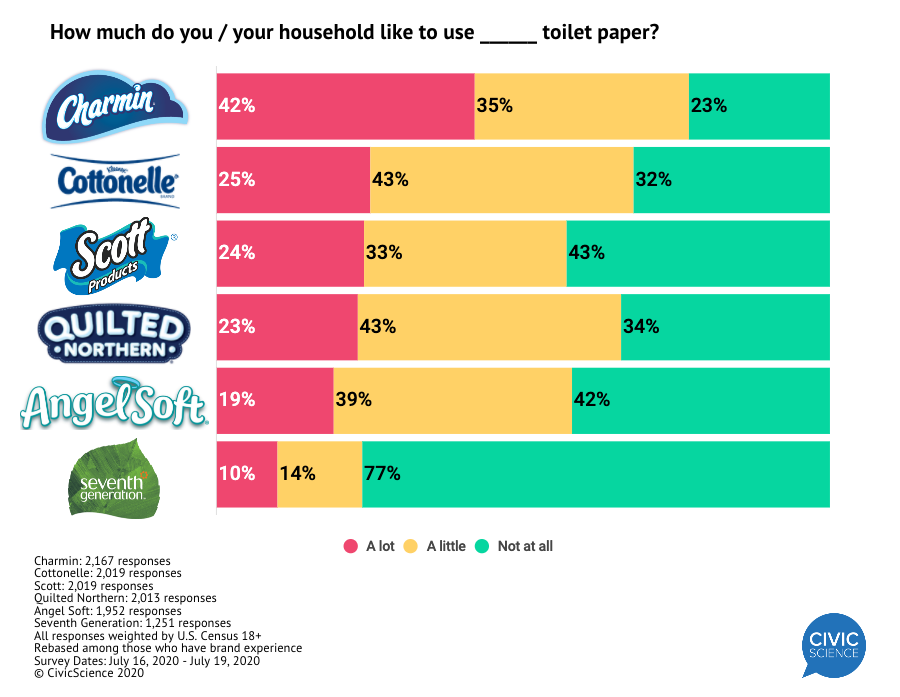 We published a few other free studies this week too:

Here were our most popular questions this week: