Alright, so that whole “Arabic numerals” thing I told you about last week didn’t go away.

By Monday, all of the Twitter activity was happening overseas. Some of it even in Arabic, which is super meta.

It was written up in the Independent, which you probably know is in the U.K. or you’d figure it out in a minute because they say per cent instead of percent.

On Tuesday I was on Dr. Drew, which really impressed my Aunt Nancy and no, they didn’t ask about our sex study.

I’m not saying any of this to boast. One of my new pen pals chastised me a few weeks ago for not being self-effacing enough in a recent missive. Duly noted.

On the contrary, I’m dumbfounded by the whole thing and not in a humble-brag kind of way. All I could think about was the money I’ve spent on marketing and PR firms that never generated a sliver of the exposure we got from this single, matter-of-fact Saturday tweet.

It didn’t even really showcase what we do here. Seven million people now think we’re a political firm, which drives me nuts. No offense, political pollsters.

I definitely marveled at watching honest-to-God virality happen in real-time. To those of you A-listers and media pundits reading this, I’m sure it’s all very quaint. Happens to you all the time. This was a first for me. And it was wild.

One thing I learned is how insanely difficult it is to ignore hundreds of people who troll and attack you every minute. I was accused of terrible things by both sides. I may be the only Trumpy, lib-tard, xenophobic, communist, evangelical snowflake in America right now. And that was only Wednesday.

Still, I engaged with almost all of them. I couldn’t help it. I was stuck somewhere between trying to spread the message of what our data was saying, educating them about how it all worked, and shaming people for their idiocy. I don’t know how you pros handle it. I was obsessed.

Anyway, I’m shutting it all off for a long weekend at our cabin, where only my kids call me unflattering names and the only number I’ll be justifying is how many beers I’ve had.

Enjoy your holiday. You deserve it.

Stop telling me I was wrong about Lowe’s earnings. Yes, I said we were bullish. Yes, Lowe’s stock took a big hit after its earnings miss on Wednesday. No, we weren’t wrong. Our data showed a marked rise in favorability toward the brand and expected increase in new consumer spending, borne of the rosy macro-economic climate. Sure enough, same-store sales were up – well above estimates – as were revenues. The problem was that Lowe’s margins were way off, on account of the impact of tariffs on their costs. Consumers (and thus, CivicScience) can’t see that. If our data was the only thing you’d need to pick stocks, trust me, I’d be retired.

The Game of Thrones finale was, well, controversial. Judging by my Twitter feed, I thought these data would be way worse. Sure, only 18% of people loved the final episode. But less than half completely hated it. Men and Gen Z viewers had the most favorable reaction. With a fanbase as ravenous as GoT’s, it was going to be hard to please everyone. 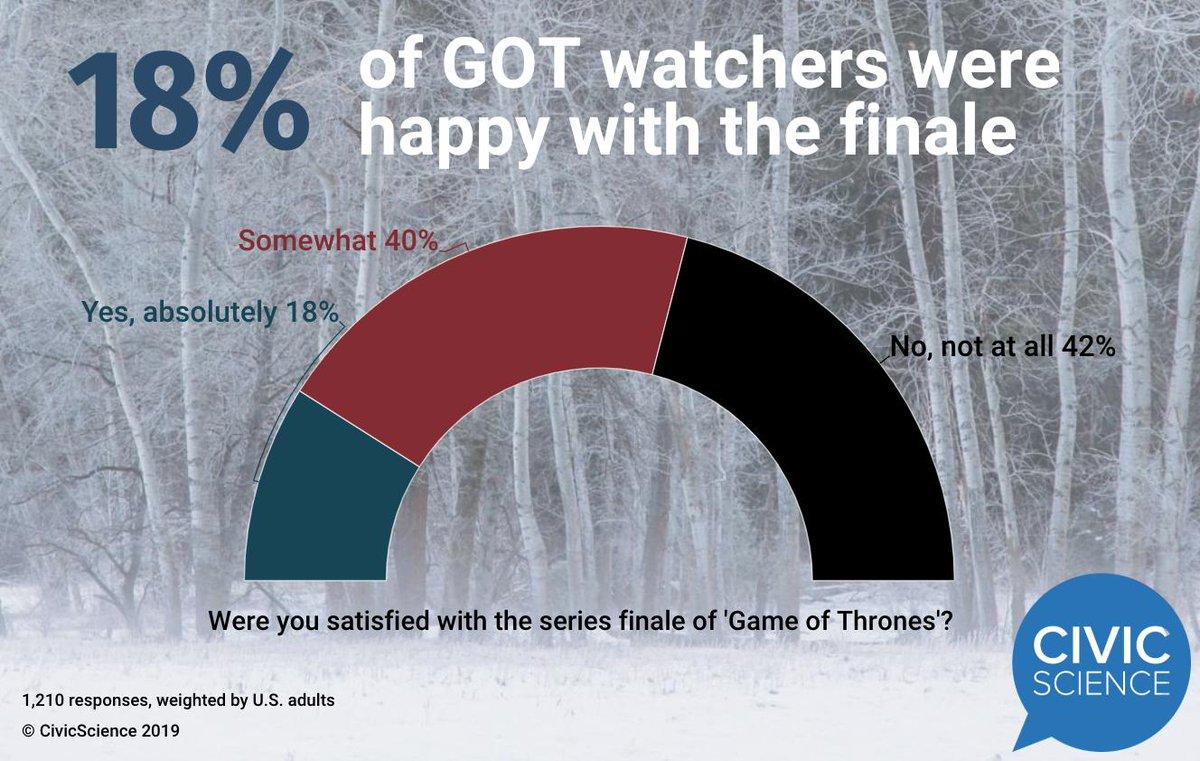 Walmart responded with its own one-day free shipping announcement and it could be a hit.Two weeks after Amazon announced its next-day shipping service for Prime members, the good people in Bentonville upped the ante, offering a similar program with no membership fees. The initial consumer reaction is positive, with nearly 1 in 4 U.S. adults showing interest. Even Amazon Prime members aren’t immune, with an approximate percentage saying they’re just as likely to try Walmart’s service. This is going to be quite the war to watch.

The outdoor apparel category is also in an interesting competitive phase. Companies like Dick’s and REI – like every other retailer basically – are seeing more and more of their business happen online. Unusual about the category, however, is that the age distribution of those online shoppers is very consistent. In other words, the hiker-biker-camper cohort is a web-savvy bunch, no matter their age (Baby Boomers notwithstanding). And, while Dick’s has far greater market share, REI has much lower negative sentiment among consumers, giving them a lot of room for growth. Dick’s move to pull guns from their stores may alienate a group of older, more conservative customers, but it could also appeal to the younger, web-oriented types that REI generally attracts. And yeah, Amazon is relevant here too.

One thing Dick’s, REI, or anyone else shouldn’t have to worry about is clothing subscription services like Stitch Fix. Here’s a trend that has gone nowhere since we started tracking it. Clothing subscription companies like Stitch Fix and Trunk Club got a bunch of hearty buzz early on and have done little to build on it. Only 6% of Americans have tried one of these kinds of services and 1/3rd of those had a negative experience. Another 4% are interested in trying it, but that’s way too small to represent any kind of growth market. Who’s really all that surprised? I don’t want anyone to pick out my clothes for me.

Conversely, the whole meatless burger phenomenon is a trend to watch even if it’s blasphemous. We actually wrote about this a week ago but I had already crammed too much stuff into last week’s installment. Also, I’m stupefied by it. Beyond Meat and the Impossible Burger are growing faster than I ever would’ve expected. The prospects among Gen Z and urbanites are particularly promising – which also means they’re big among the QSR crowd. Look for this to be a trend popping up at more and more places – except Arby’s.

And here are some of the most popular questions in our system this week: